In Africa, Bush Touts Record AIDS Relief under his Administration, but Funding Restrictions Tell a Different Story on the Ground

The centerpiece of President Bush’s visit to Africa is his HIV/AIDS policy known as PEPFAR, or the President’s Emergency Plan for AIDS Relief. Many have criticized the legislation’s emphasis on abstinence and the restrictions it places on programs that incorporate family planning or are directed at sex workers. We speak to David Bryden of Global AIDS Alliance and Laurie Wen, a Rwanda-based Harvard academic researching the impact of US HIV/AIDS policies. [includes rush transcript]

AMY GOODMAN: I want to move on now to the centerpiece of President Bush’s visit to Africa: HIV/AIDS policy, known as PEPFAR, or the President’s Emergency Plan for AIDS Relief. On Sunday, he visited an HIV/AIDS clinic in Tanzania and urged his successor to continue funding treatment programs.


Funding for HIV/AIDS programs in Africa increased to $15 billion under PEPFAR, and President Bush is now promising to double the amount. Many have criticized the legislation’s emphasis on abstinence and restrictions on family planning, or also —-


We’re joined by two guests with a good sense of how the HIV/AIDS programs funded by President Bush translate on the ground. David Bryden with us, a spokesperson for Global AIDS Alliance in Washington, and Laurie Wen is with the Harvard School of Public Policy researching impact of US HIV/AIDS policies in Rwanda, a country President Bush will visit on Tuesday.


Let’s begin with you on the phone in She joins us now on the phone in Kigali, Laurie Wen. What is the United States doing? What is President Bush offering in Rwanda right now around the issue of HIV/AIDS?


LAURIE WEN: Amy, can you repeat that question, please? I couldn’t hear you.


AMY GOODMAN: What is President Bush bringing to Rwanda around HIV/AIDS? What is the US policy around AIDS?


LAURIE WEN: I think I’ll maybe leave the policy part to David Bryden, who is also on the call. Since I’m in Kigali, maybe I can brief the listeners and viewers on the realities on the ground of what poor sick people are actually experiencing and how -— and what they’re experiencing on the ground.


LAURIE WEN: OK, so I am here doing some work in connection with an organization called FXB, which provides direct services to poor people in rural Rwanda and in cities in Rwanda who are infected or affected by HIV. And through that work, I have spent time with, for example, women in rural Rwanda who may have nine or ten children, who don’t have enough money for food, who have to walk half an hour to get water, and who have to gather branches just to cook. And in terms of abstinence only — in terms of family planning, positions that President Bush is now proposing, again for PEPFAR II, can we look this woman in the eye and say, PEPFAR is really designed to help people like you? Or is PEPFAR more a political game? You know, is it more about trying to boost the ratings of a president with low approval ratings? So, if you asked that woman, “Five years ago, ten years ago, if we could offer you family planning advice and services, would you have appreciated that?” this woman would probably say yes. And there are many women like her who feel completely disempowered in controlling how many children they have. So, I think policymakers, President Bush and voters need to think about this. When the US government talks about a policy to help the poor and the sick, do they really have the ultimate interest of the poor and the sick in mind, or is it a political game?

AMY GOODMAN: Laurie Wen is speaking to us from Kigali, Rwanda. David Bryden, with Global AIDS Alliance, is in Washington, D.C. What is PEPFAR II? Explain, David Bryden.

DAVID BRYDEN: Yeah, PEPFAR II is the expansion, continuation of the President’s Emergency Plan for AIDS Relief. That’s what PEPFAR stands for. And what’s being debated right now and what Laurie is referring to are a number of questions regarding what should be the future course of that program, of this PEPFAR II, which would go from 2009 to 2013. President Bush is in Africa saying he wants to be an equal partner with Africa and respect and observe what Africans want to do on this program. But in fact — in fact, what he’s doing back in Washington is something very, very different.

And there’s no question that there are a number of reforms that are needed when it comes to this program. Africans have made clear that the abstinence-only emphasis within behavior change programs has got to change. And we also see a number of problems when it comes to the breadth of the program, and it needs to do more to support community health workers. So, there are some real changes that are needed, but unfortunately, on those issues, President Bush is standing in the way. And that’s the reality that’s not being brought out, unfortunately, and I’m afraid that —

AMY GOODMAN: In what way, David?

DAVID BRYDEN: In what way is he standing in the way?

DAVID BRYDEN: Yeah. What’s happening right now is, the White House is weighing in in a debate in Congress, and in fact, the vote in committee, in the House Foreign Affairs Committee, will be next week, in which he is insisting that the program actually be kept at its current size — in fact, flat-funded every year for the next five years. That’s what his program actually amounts to.


A number of members of Congress, including Senator Biden and a number of members of the House, are on record supporting a much higher figure, $50 billion, and the reason being is that we need to include many more things in this program in order to be effective. We need to support healthcare system strengthening. We need to do more on TB and malaria. We need to do more to help orphans and vulnerable children. And with enough support, African countries can use those resources effectively.

But, unfortunately, the President is weighing in, and a number of his allies in Congress — Congresswoman Ileana Ros-Lehtinen and others — are weighing in and propagating a number of myths about the program and the reforms that the Democrats have proposed to distract attention and block the reforms that the Democratic majority has proposed. So we’ve got quite a debate in Washington, and it’s going to come to a head next week.

And what Laurie is referring to when it comes to family planning is one of the hot-button issues. And it has to do with the question of whether the United States government will ensure that when a woman goes to an HIV/AIDS clinic for her HIV/AIDS treatment or for treatment to prevent the transmission of the virus to her newborn when in labor, whether she can get family planning advice and services at that same clinic. The Bush administration is saying no, under no circumstances should she get those kinds of services; she has to go elsewhere to get those services, some other clinic, some other place. And what the Democrats in Congress and a number of Republicans are supporting — some moderate Republicans are supporting this, as well — are saying that, no, a woman should have, as Laurie was saying, the right to receive that kind of information and services, because it’s actually in — not only in her interest, but in the interest of her family, for safe pregnancy and for family planning.

AMY GOODMAN: David Bryden, we’re going to have to leave it there, but we will certainly continue to follow this controversy in Congress next week. David Bryden, spokesperson for Global AIDS Alliance in Washington D.C. Laurie Wen was with us on the phone in Kigali, Rwanda. She is with the Harvard School of Public Health. 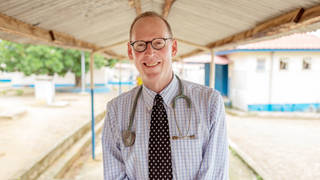