In Pakistan, voters have handed President General Pervez Musharraf’s ruling party an overwhelming defeat in the country’s parliamentary elections. We go to Pakistan to speak to columnist Fatima Bhutto, the niece of slain opposition leader Benazir Bhutto. Fatima has been critical both of Bhutto’s party, which she says committed fraud in Monday’s vote, and of Pakistani President Pervez Musharraf. [includes rush transcript]

AMY GOODMAN: We go international to Pakistan, where voters are also active. They have handed President General Pervez Musharraf’s ruling party an overwhelming defeat in the parliamentary elections there. According to unofficial results, the two main opposition parties of assassinated former Prime Minister Benazir Bhutto and former Prime Minister Nawaz Sharif now have a clear lead in the parliament. If they form a coalition with a two-thirds majority, they could impeach Musharraf, but there is no certainty they will work together.


As results poured in overnight, Pakistan Television reported that Bhutto’s Pakistan Peoples Party had grabbed eighty-six of 268 seats being contested in the National Assembly. Sharif’s Pakistan Muslim League won sixty-five, while Musharraf’s former ruling party had thirty-seven. Full results might be released later today. Several prominent leaders of Musharraf’s party, including its president, appear to have lost their seats.


The United States has provided more than $10 billion in aid to Musharraf’s government since 9/11, the majority of which went to Pakistan’s military. President Bush has repeatedly praised Musharraf as an ally in the so-called war on terror.


Monday’s vote was postponed from January 8th after Benazir Bhutto was assassinated in late December. Fears of election-day violence Monday were widespread. At least twenty people are reported to have died yesterday, with Bhutto’s party reporting fifteen of its members killed. There were also reports of missing ballot boxes.


We go now to Pakistan to speak with Fatima Bhutto. She is the niece of the slain opposition leader Benazir Bhutto. Fatima Bhutto writes a weekly column for Pakistan’s largest Urdu newspaper. It’s called Daily Jang. It’s the English sister paper, The News International. Her father, Murtaza Bhutto, was killed by police in 1996 in Karachi. Her grandfather, Zulfikar Ali Bhutto, was the founder of the Pakistan Peoples Party.


Fatima Bhutto, thank you for joining us from Pakistan. You’ve been a poll watcher there. What have you seen?


FATIMA BHUTTO: Thank you, Amy. What we’ve seen on the ground here in Larkana in the Sindh province has been overwhelming and very blatant rigging by the PPP. It’s been — you know, we joke here in Pakistan that rigging is a celebrated component of the Pakistani election ethic, but having been part of four election campaigns, I can say safely that I’ve never seen anything as remarkable as yesterday’s rigging by the Pakistan Peoples Party here.


AMY GOODMAN: What do you mean, “rigging”?


FATIMA BHUTTO: Well, there are several things. There is incomplete voter lists that were being used at every polling station with, you know, five to six hundred names with the name, a birth date and a father’s name, but no national identity card number. Now, for that vote to be legally cast, the voter would have to bring in a birth certificate, which of course didn’t happen.


We tried to protest this and General Pervez Musharraf, because, whether he likes it or not, he remains a dictator rather than an elected president. I said that this was allowed, that it was allowed for people to cast votes without national identity numbers.


You also have very open rigging, ballot stuffing in several areas known to be PPP areas in Larkana. I personally witnessed them and saw ID cards being used by their voters. Now, we know that they’re voters, because outside of the polling station in Pakistan, there was a camp set up by every political party contesting, and their voters have to come to them to get a slip of paper with their voter ID number. Four cards we confiscated in the Murad Wahan polling station in Larkana were all carrying PPP slips of paper with a voter number. These were IDs that were duplicates, not originals, which are illegal. These are ID cards without photographs, which is also illegal. You know, there was one woman who I took an ID card from who was not much older than I am. She was in her early twenties, and she had a one-year-old baby, but a birth date of 1955 on her ID card.


There are also irregularities concerning the numbers. There has been an extremely low turnout across Pakistan, but notably thin because of fears of violence. And, you know, the government is claiming that 40 percent of the population voted, which is a gross exaggeration. PPP candidates are claiming wins of 80,000 and 70,000 votes. It just doesn’t add up.


AMY GOODMAN: So, Fatima Bhutto, you’re saying that your aunt’s party, Pakistan Peoples Party, the PPP, has rigged the election. They, at last count, had the most votes over Nawaz Sharif and, of course, over Musharraf, who has been roundly defeated. Now, you, for a long time, have been critical of your aunt, of Benazir Bhutto, who was assassinated in December, holding her responsible, when she was prime minister, for the death of your father, her brother, Murtaza Bhutto.


FATIMA BHUTTO: Yes, but this — you know, Benazir is not with us. This is not a question of being critical of Benazir. This is a question of being critical of a party that has a twenty-year legacy of corruption and political malfeasance. The PPP has been in government for twenty years, more or less, since 1988, at least in parts of Sindh, if not forming a national government. And, you know, where I’m speaking to you from now, Larkana, has always had PPP representation. And there are still open gutters in Larkana. There is one government hospital for a city of approximately four million people. There are ghost schools set up for girls. There are no actual government schools in the city area designated for girls’ education. It is proof of the PPP’s corruption, of their lack or reluctance in putting funds towards people and people’s empowerment or social justice initiatives. And this is what I am critical of. And having witnessed yesterday a complete disregard for the democratic process by the PPP, a party that claims to be interested in some kind of democracy, is astounding, and it’s not acceptable. And it’s not acceptable for us as Pakistani citizens to stay quiet on this front.


AMY GOODMAN: What does this mean for the people of Pakistan now, the defeat of Musharraf? And what role has the US played, just talking about the $10 billion the US has sent there in the last years?


FATIMA BHUTTO: Well, I’m really glad you brought it up, Amy. I mean, these $10 billion President — or General Musharraf’s government has claimed have been — some of it — they claim $100 million, I think, has been put towards education, which is — you know, it’s just a — it’s a joke to even consider. And the United States, and specifically through the government of George W. Bush and his neocon coterie, has actively supported the Musharraf machine. You know, this is a country where, since the war on terror, Pakistan state agencies have disappeared 5,000 to 8,000 of their own citizens. This is, of course, ignored, in the same way that, you know, Pinochet’s disappearances in the ’70s were ignored because he had American allies.


It’s an incredibly dangerous time for Pakistan, because we have — we have a military government still, in essence. We have a military president in power. And we have two other political parties who have had eleven years’ worth of time in power in Pakistan, eleven years of the PPP and PML. And they’ve produced nothing. I mean, they have a sick country, really, and their presence in government will only make it sicker.


AMY GOODMAN: Finally, Fatima Bhutto, your view of the news conference, the announcement that your cousin, your aunt’s son, and her husband, who has been imprisoned for corruption, were taking over the PPP?


FATIMA BHUTTO: Well, you know, actually, my cousin is a very young man, and I wish him only well. I wish that he has a peaceful life and plans to continue his studies. But as for Asif Zardari, I think it’s quite fair to say that he is one of the most venal figures in Pakistan. He is a man who currently has murder cases pending against him and cases of extortion, of corruption. The list is endless. And to have him in Pakistan in any position of power is a very dangerous signal for the people in this country.


AMY GOODMAN: And what are your plans? Do you plan to be a — to run for office in Pakistan?


FATIMA BHUTTO: No, Amy, I don’t. I don’t believe in dynastic politics. I don’t believe in the politics of birthright. I write. You know, I write in Pakistan. I’ve published two books. I’m a writer, and I’m political through my writings. And I am active in grassroots causes. In that sense, I am politically active, but I have no desire to sit in parliament, especially not this kind of a parliament, no.


AMY GOODMAN: Fatima Bhutto, I want to thank you very much for being with us, niece of the slain Pakistani opposition leader, Benazir Bhutto, writes a weekly column for Pakistan’s largest Urdu daily paper and its English sister paper, The News International. She’s speaking to us from Pakistan. 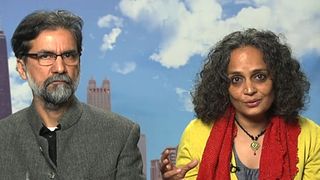 A New Intifada in Kashmir? Arundhati Roy & Sanjay Kak on the World’s Most Densely Militarized Area