Several states have announced plans to resume carrying out executions by lethal injection after a major Supreme Court ruling on Wednesday. In a seven-to-two decision, the Court upheld Kentucky’s method of execution by lethal injection. We speak with the founder of the Texas Coalition Against the Death Penalty, David Atwood. [includes rush transcript]

AMY GOODMAN: In a blow to anti-death penalty activists, the Supreme Court ruled on Wednesday that execution by lethal execution in Kentucky does not violate constitutional protections against cruel and unusual punishment. The seven-to-two decision effectively lifts a de facto moratorium on lethal injections. Several states, including Texas, Florida, Virginia, Alabama, Georgia, Mississippi and Oklahoma, have already announced plans to resume executions. The decision came one day after Amnesty International named the United States one of the top five executioners in the world, along with China, Iran, Pakistan and Saudi Arabia.

Today, we look at Texas, the execution capital of the United States. When reached for comment, the Texas Department of Criminal Justice said no executions have been scheduled as yet, but death row prisoners in the state could be put to death as early as thirty days from today.

But Houston’s Chief Prosecutor, Kenneth Magidson, said he would seek execution dates for least six death row prisoners “in due course.” Texas Governor Rick Perry applauded the Court’s decision, saying that “Texas is a law-and-order state, and I stand by the majority of Texans who support the death penalty as it is written in Texas law. It is an appropriate response for the most violent crimes against our fellow human beings.”

David Atwood is the founder of the Texas Coalition Against the Death Penalty, joining me here in Houston, Texas. Welcome to Democracy Now!


AMY GOODMAN: Can you talk about the significance of the Supreme Court ruling?


DAVID ATWOOD: Well, for Texas, it’s very significant, because we have 370 people on death row. We will probably have — between now and the end of the year, we could have twenty or twenty-five executions in this state as a result of this ruling. And so, more than any other state, the ruling will have a big impact on Texas. And, of course, we didn’t want this to happen. We would have liked any other decision other than this decision. But we think also that there will be other challenges on the lethal injection question, and there could be many other things that could be brought up with time also that really make it very clear to us that the death penalty, as being applied here in Texas, in particular, is unconstitutional.


AMY GOODMAN: Explain, though, the significance of the Supreme Court decision. What was the case that came forward in this?


DAVID ATWOOD: OK. This was a Kentucky case. It goes under the name of Baze, who is one of the prisoners who brought this case forth. And the question was the method of execution, the lethal injection process that’s used in Kentucky. And the position of the defendant was that it’s cruel and unusual punishment because of the three chemicals that are used in the lethal injection procedure. Basically, those chemicals are used in all states. We use them here in Texas. It’s — you start off with a sedative, then another chemical that paralyzes the muscles, and then a third chemical that actually stops the heart. And they tried to make the case that this could cause excruciating pain if not done properly. And the Supreme Court basically said that they didn’t make the case. And so, they lost that particular case. There are challenges in other states also, so it’s not done yet totally, but this is really significant, what happened in Kentucky, and it really has opened up the door for many more executions.


AMY GOODMAN: So, how will these prisoners die in Texas, if executed?


DAVID ATWOOD: Well, it will be lethal injection. We’ve used this method — in fact, the first lethal injection in the United States was done in Texas back in 1982. The method was created by a pharmacist in Oklahoma, actually, but Texas was the first state to use it. And since we started back up in 1982, we’ve had 405 executions in this state alone, which is — the next nearest state, I think, is Virginia, that’s had ninety-eight. So we’re way out in front when it comes to executions. And like I say, we have 370 people on death row.


AMY GOODMAN: David Atwood, how did you get involved with the death penalty?


DAVID ATWOOD: I got involved initially through my church, and then I was asked by a Catholic nun to visit some prisoners on death row. It was not Sister Helen Prejean, who is another person. And when I first went to death row, that’s what really — you know, really got me involved in this issue, because I saw the people on death row, despite what they had done as human beings, and also became aware of all the problems in the criminal justice system and realized that the death penalty was actually totally unnecessary for the protection of society, because we can keep people safe, we can keep society safe through long-term imprisonment, when necessary. And so, that goes back about almost twenty years ago, when I first started to get involved.


AMY GOODMAN: And who is involved in the anti-death penalty movement here in Houston, Texas? And why is this state called the death penalty capital of the United States?


DAVID ATWOOD: Well, the people that are involved in the anti-death penalty work come from every section of society that you can imagine. We have former military people. Believe it or not, we’re not all Democrats. We have Republicans in our organization, too. And a lot of people are just very concerned about this issue.


But we have become the death penalty capital of certainly the United States and really, in a sense, the Western world, because we have a — well, like Governor Perry said, you know, he says we’re a law-and-order state. And of course, my response to that is that all states are law-and-order states. I don’t know of a state that isn’t law-and-order. But the politicians of this state, the governor — we had Governor Bush before and now Governor Perry. Between the two of those men, we’ve had over 300 executions, just by them alone. And so, the politicians in this state really embrace the death penalty. I don’t think that the citizens of Texas have a love affair with the death penalty, although the Governor would like to say that and will make these public statements.


AMY GOODMAN: What about the stances of the presidential candidates?


DAVID ATWOOD: Well, none of them have officially come out against the death penalty. We know that McCain probably would hold fast to this having the death penalty. I’m afraid I think Hillary Clinton would, too, based on, you know, past experience, what we know about them. But Barack Obama has not really come out officially against the death penalty, but we feel that he probably would have a much more reasoned approach to it and that he probably would bring up questions about how it’s being used and if it’s really needed. And so, you know, personally — this is a personal opinion, that I think that he would be the best of the three candidates on our issue.


AMY GOODMAN: But he hasn’t come out against the death penalty?


DAVID ATWOOD: No, he has not. He did work in Illinois to make the procedures more fair, which I think was good. And, you know, a lot of the politicians think that if you come out against the death penalty, that this is the kiss of death for their political career. I don’t think that’s true, but a lot of them believe that.


AMY GOODMAN: Well, I want to thank you very much, David Atwood, for joining us. David Atwood is the founder of the Texas Coalition to Abolish the Death Penalty.

Great American Hypocrites: Glenn Greenwald on the Corporate Media’s Failures in the 2008 Race

NEXTGreat American Hypocrites: Glenn Greenwald on the Corporate Media’s Failures in the 2008 Race 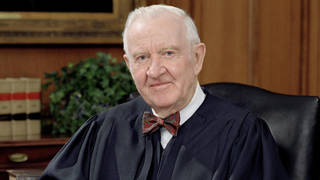