With a career spanning more than six decades, Gore Vidal is one of America’s most respected writers and thinkers. He’s authored more than twenty novels and five plays. His latest book is Point to Point Navigation: A Memoir. [includes rush transcript]

StoryMay 14, 2008Legendary Author Gore Vidal on the Bush Presidency, History and the “United States of Amnesia”

JUAN GONZALEZ: Amy Goodman is in Los Angeles today, where she’s attending BookExpo America’s annual conference. The last time she traveled to Los Angeles, she had a chance to interview Gore Vidal, considered one of America’s most respected writers and thinkers. Vidal is the author of more than twenty novels and five plays. His latest is a memoir; it’s called Point to Point Navigation. Amy sat down with him in his home in Hollywood Hills for a wide-ranging interview. We had broadcast Part One of that interview earlier this month. This is the rest of their conversation.


AMY GOODMAN: I see a photo on your wall that says, “To Gore, who made it impossible to look serious like this,” or something like that.


GORE VIDAL: Yes. We all called her Jackie. Nobody called her “Jacqueline.” And she just — she insisted, when they moved to the White House, that she be known as Jacqueline Kennedy, to which her sister-in-law Eunice Kennedy said, “Why? Because it rhymes with ‘queen’?” Oh, those girls.


AMY GOODMAN: You grew up with Jacqueline?


AMY GOODMAN: What did you think of the Kennedys?


GORE VIDAL: Which ones?


AMY GOODMAN: Of Jacqueline Kennedy and John, the President?


GORE VIDAL: Well, I never thought of them as being glued together, no. I knew Jack first. Then I saw a good bit of Jackie. And I first got interested in them when he ran for — the convention nominated Adlai Stevenson, and he wanted to be the running mate, and I knew Stevenson, so he asked me some questions. I realized he was serious.


AMY GOODMAN: What did you think of Jack Kennedy as president?


GORE VIDAL: Well, he was a pretty bad president, but —-by any standard. But he was one of the most charming men I’ve ever known and very shrewd. He wasn’t taken in by anybody or anything.


AMY GOODMAN: What do you mean he was a bad president?


GORE VIDAL: Well, I don’t think the Bay of Pigs was a good move, do you? And I don’t think quarreling with Khrushchev when he got to Vienna was a good thing to do. I can think of practically everything he did that was basically disastrous and leading us closer to war. The Gores are one of the leading antiwar families all the way back to the Civil War, which, although they were Southern, they did not want to secede from the Union. So I have a whole fix on war that he didn’t have. He thought it was romantic. He was funny about PT-109. His father made him a hero after he lost his boat. And he said, to my surprise, “I came back expecting to be court-martialed, and my father has made me a hero.” He got John Hersey to write about him in The New Yorker, I guess it was.


AMY GOODMAN: What happened with PT-109?


GORE VIDAL: Well, Jack was not a good pilot. So he ran his ship right in front of a battleship or a destroyer, I forget which, and it was cut in half. The crew was jumping around in the sea. Jack got decorated for saving the life of one of them, and that was it. From then on, it was one of the great war heroes of all time. Joe Kennedy knew how to manipulate publicity.


AMY GOODMAN: How did the shrewdness of Jack Kennedy express itself?


GORE VIDAL: Through observation, the only way it ever does with anyone. He could figure out what people were up to and what they were apt to do. Very shrewd about his own family. And it’s very easy in one of those big Irish families to romanticize them and think that, you know, not since so-and-so through Tara’s halls, you know, drifted.


GORE VIDAL: Well, I had two hit plays on Broadway. I published several novels, turned myself into an essayist. See, I couldn’t really be published properly, because the New York Times had declared war on me, and they would never -— they saw to it that I would never be reviewed.


AMY GOODMAN: Why did they declare war?


GORE VIDAL: If you don’t know this story, it’s too boring to go into.


AMY GOODMAN: But think of all the young people who are listening right now and who are watching.


GORE VIDAL: Well, I said, “Screw them,” and I went on. That’s for the young people listening. I don’t think any of the young people would be as hated by the Times as I was. It was hysteria.


GORE VIDAL: Well, work it out, work it out. Why would they be so hysterical? They got above their humble station, which is a pretty lousy establishment newspaper. And I don’t know. They got vain. They believed what they said about themselves: “all the news that’s fit to print.” Well, you know, almost nothing that was fit to print ever got in. And it’s as bad a newspaper today as it ever was.

JUAN GONZALEZ: Writer Gore Vidal, being interviewed by Amy Goodman at his home in Hollywood Hills earlier this month.

1968, 40 Years Later: Tariq Ali Looks Back on a Pivotal Year in Global Struggle for Social Justice

NEXT1968, 40 Years Later: Tariq Ali Looks Back on a Pivotal Year in Global Struggle for Social Justice 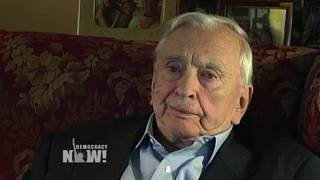 Legendary Author Gore Vidal on the Bush Presidency, History and the “United States of Amnesia”