September 11th Families for Peaceful Tomorrows Continue Advocacy for Victims of US Attacks on Iraq, Afghanistan

Nearly seven years ago, a group of family members of those killed on Sept. 11 united to advocate for a nonviolent response to the attacks on the World Trade Center and Pentagon. Since then, members of September 11th Families for Peaceful Tomorrows have traveled to Iraq, Afghanistan and other conflict areas to meet with the victims of the Bush administration’s so-called war on terror. We speak to Terry Rockefeller, who has just returned from her second trip to Iraq. Terry’s sister Laura died on 9/11 at the World Trade Center. [includes rush transcript]

AMY GOODMAN: In fact, we began on television, expanding from radio, seven years ago this week, right at the time of the September 11th attacks. We did our first TV broadcast with Manhattan Neighborhood Network, public access TV here in Manhattan. I’m Amy Goodman, here with Juan Gonzalez.


JUAN GONZALEZ: Well, nearly seven years ago, a group of family members of those killed on September 11th united to advocate for a nonviolent response to the attacks on the World Trade Center and the Pentagon. The group called themselves September 11th Families for Peaceful Tomorrows. For the past seven years, members of the organization have traveled to Iraq, Afghanistan and other conflict areas to meet with the victims of the Bush administration’s so-called war on terror.


AMY GOODMAN: Our next guest, Terry Rockefeller, has just returned from her second trip to Iraq, where she met members of a new Iraqi peace group. It’s called LaOnf, which in Arabic translates to “no violence.” Terry’s sister Laura died on September 11th.


She was at Windows on the World, the restaurant?


TERRY ROCKEFELLER: Yes. My sister was an actress, but she had a two-day part-time job helping to run a seminar on information technology. So, I really had no idea that she could possibly have been involved in the attacks. I was shocked, like everyone in the country was shocked. But it wasn’t until the end of the day seven years ago that I learned that she had been there.


And I think that just the sheer improbable nature of her death made me think and begin to appreciate the nature of random violence and the nature of war, and understanding that so many people who live in violent situations day in and day out, not as we do here in America, but as is true in so many other parts of the world, are innocent civilians. And Peaceful Tomorrows, as a group, has tried to establish citizen-to-citizen connections and learn facts on the ground that, I think, really challenge the policies that our government has pursued.


JUAN GONZALEZ: And how soon after the events of September 11th did you start getting involved in that movement?


TERRY ROCKEFELLER: I actually heard about the trip that four of the founding members of Peaceful Tomorrows made to Afghanistan, which was in January of 2002. And when I read about that on the internet, I knew I would have to get in touch with them. So, you know, the feelings were there from the beginning, just the deep fear that this violence could spread out of control, cycle out of control, and that real responses of nonviolence were called for. And when I heard about Rita and Kelly and Derrill and Eva going to Afghanistan, I knew they were people I had to meet.


JUAN GONZALEZ: I wanted to ask you, because I remember, back in early 2003, there was a CNN interview with you, as you were getting ready to go to Iraq before the US invasion.


JUAN GONZALEZ: And Miles O’Brien, the person who interviewed you from CNN, kept saying that you were being naive, or weren’t you actually helping to prop up the propaganda machine of Saddam Hussein? And looking back, remembering that interview now and all the things that have happened since then, the same CNN now that is constantly —-


TERRY ROCKEFELLER: Yeah, “naive,” “unpatriotic” -— we were called a lot of things. But I do believe that those of us who were personally affected by the 9/11 violence understood something viscerally about the nature of terrorism, which is that it feeds on itself. And you can take steps to break the cycles. And I think that continues to be a message that our administration and the entire American public needs to hear.


AMY GOODMAN: I just want to note, as we record this broadcast, stations will run it at different times through the day, this is the moment, at 8:46, when the first plane hit the first tower of the World Trade Center. There is silence through New York right now.


The feelings of Iraqis when they hear that you, Terry, lost your sister on September 11th?


TERRY ROCKEFELLER: Well, when I was in Iraq just a little over a week ago now, I was attending this meeting of a newly — well, a two-year-old now, but really rapidly growing network of peace and nonviolence activists in Iraq, I think that the first response to our telling our stories — and I was accompanied by another Peaceful Tomorrows member, Adele Welty, whose son was a firefighter and also died in the Trade Center — was that they found our choice of pursuing nonviolence surprising and improbable, but then I think it made a very, very deep bond.


You know, literally every member of this organization had a comparable story to tell us of losing a family member. And yet, they have chosen in their cities and within their society to reach out, to support dialogue rather than violence, to try to prevent the use of toy guns, which have been leading children in Iraq to be shot at by the military. They are working to build a culture of peace, and they’re doing it with a deep knowledge of their own society. So, I found that by the end of spending a week with them, we had built bonds of hope. And I — as a member of Peaceful Tomorrows, we will be — I will be working to see that as their week of nonviolence happens soon, we can spread more word about their achievements.


AMY GOODMAN: Well, Terry Rockefeller, you mentioned Rita. You were referring to Rita Lasar. She was seventy years old when she lost her brother Abe Zelmanowitz on the twenty-seventh floor of the World Trade Center. And as you pointed out, she then went to Afghanistan. She had written to President Bush, begged him not to attack —-


AMY GOODMAN: —- said, “Not in my name.” And we had a remarkable moment with her and an Afghan New Yorker in our studio, meeting, and this is what we’re going to go to first.

From One Ground Zero to Another: An Afghan American Who Lost 19 Family Members in US Bombing, and a New Yorker Whose Brother Died in the World Trade Center

NEXTFrom One Ground Zero to Another: An Afghan American Who Lost 19 Family Members in US Bombing, and a New Yorker Whose Brother Died in the World Trade Center 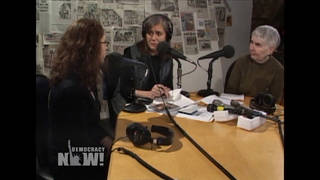