The United States is planning an enormous $15 billion military buildup on the Pacific island of Guam. The project would turn the thirty-mile-long island into a major hub for US military operations in the Pacific in what has been described as the largest military buildup in recent history. We speak with Julian Aguon, a civil rights attorney from the Chamoru nation in Guam. [includes rush transcript]

StorySep 13, 2022Julian Aguon: U.S. Militarization of Guam Is “Nothing Less Than Cataclysmic”

JUAN GONZALEZ: We turn now to the Pacific island of Guam, where the United States is planning an enormous military buildup to the tune of $15 billion. The project would turn the thirty-mile-long island into a major hub for US military operations in the Pacific. It has been described as the largest military buildup in recent history and could bring as many as 50,000 people to the tiny island.


On Capitol Hill, the conversation has been restricted to whether the jobs expected from the military construction should go to the mainland Americans, foreign workers or Guam residents. But we rarely hear the voices and concerns of the indigenous people of Guam, who constitute over a third of the island’s population.


We’re joined now by a civil rights attorney from the Chamoru nation in Guam, Julian Aguon, who is the author of three books, including The Fire this Time: Stories of Life Under US Occupation and What We Bury at Night: Disposable Humanity.


JULIAN AGUON: Thank you very much for having me.


JUAN GONZALEZ: Well, this latest buildup, how did this develop? It is now troops that are being moved from Okinawa by the United States to Guam. Could you talk a little bit about the decision in recent years on this buildup?


JULIAN AGUON: OK. The military buildup was first announced in 2005. Basically, the United States had made a bilateral agreement with the Japanese government to transfer some 7,000 US Marines from Okinawa to Guam, in large part due to Okinawan mass protest against military presence, because they shoulder roughly 70 percent of the US military presence in all of Japan in Okinawa. So, that was in 2005.


Fast-forward to 2009, we see that the US has recently announced that the number — it keeps ballooning. It’s really unbelievable, because now it’s set to include 8,000 US Marines and their 9,000 dependents, another thousand troops from South Korea, as well as an outside labor —- foreign labor workforce estimated upwards of 20,000 people. So we’re talking about a four— to five-year injection of a population increase of 20 percent in five years.


So that’s really — what we’re concerned about, the indigenous Chamoru community of Guam, is that we haven’t exercised self-determination yet. Guam remains one of only sixteen non-self-governing territories, i.e. UN-recognized colonies, of the world. We don’t even vote for the US president. We have no effective, meaningful representation in the US Congress. And the entire buildup was announced, and it was basically — any Chamoru consideration was really de facto. We’re never really at the table. We were just informed by the US that they were going to bring in outside population of these many tens of thousands of people.


And the entire population of Guam is set roughly at 171,000 only, and the Chomoru population makes up roughly 37 percent of that population. So, really, this demographic change will have irreversible consequences, and we don’t even have the infrastructure, and no money has been really — has been, in essence, promised to the government.


JUAN GONZALEZ: —- is familiar to me as an unincorporated territory, because, of course, I come from — I was born in another unincorporated territory or colony of the United States, Puerto Rico, and both of our countries were — came under US sovereignty at the same time as a result of the Spanish-American War. Could you talk a little bit about the history of Guam —-


JUAN GONZALEZ: —- and the lives of your people under US rule for the last more than a century now?


JULIAN AGUON: OK. Well, Guam is one of the longest-colonized islands in the Pacific. We were colonized by Spain for almost 300 years and then by the United States. We got ceded to the United States under the 1898 Treaty of Paris, along with Cuba, Philippines, Puerto Rico, as you know. So, since 1898 until present, with the exception of a three-year — 1941 to 1944, we were occupied by the Japanese imperial forces during World War II, which is a completely other story, which was also horrific. But we basically have been under US colonization since 1898 until the present. So we’re actually coming on 500 years of uninterrupted colonization.


And that’s sort of why being even on this program is so precious for us, because we never, ever get a word in edgewise. And basically, the US uses language all the time to disappear us. We’re often called “where America’s day begins,” a possession, even according to US court cases, “possession.” We’re essentially an instrumentality of the federal government. Or they use words like “unsinkable aircraft carrier” now or “tip of the spear.” All of this language is, you know, really — it’s really clever, and it just disappears us. And so, the outside world, including mainland United States, really they’re allowed to sort of forget that there are people there. There are only ghosts. So, that’s been our experience.


And the military buildup has been no different. We actually situate the current US military buildup as the latest in a very long line of covenant breaches on the part of the United States, because in 1946, the US placed Guam on the, you know, the UN list of non-self-governing territories and basically assumed a, quote, “sacred trust obligation” under international law, by virtue of Article 73 of the UN Charter, to guide Guam toward self-determination. And now, with the military buildup, which — it really seeks to pack the last punch. It will be decisive, because it is so large and it’s so enormous. And basically, the way I see it is, the needs of my people are buckling. We’re not going to be able to withstand so much more weight.


JUAN GONZALEZ: And in terms of the other aspect of life in Guam that most Americans don’t know about, the radiation exposure that your islands were subjected to in the World War II, post-World War II era?


JULIAN AGUON: Mm-hmm. Well, the most well known, or the most notorious, actually, is the nuclear campaign launched by the United States in our neighboring islands, because Guam is part of a region of the Pacific, the western Pacific, known as Micronesia, which includes the Federated States of Micronesia, the Republic of Palau, the Republic of the Marshall Islands, and this Commonwealth of the Northern Mariana Islands. Actually, Guam is only thirty miles long, but it really is the largest and southernmost island in its own natural archipelago, the Mariana island chain. So we were one people, up until 1898. So that’s another reason why that date is so important, because it basically politically divided us in 1898. Guam was taken by the US, and CNMI went to Germany. So, we’re in that part of the region.


Between 1946 to 1958, the US dropped more than sixty nuclear weapons on the people of the Marshall Islands. One bomb, the most notorious, Bravo, that shot — the latest estimate — I speak with senators over there, including Tony deBrum of the Marshall Islands, who’s been such a longstanding advocate in the Marshall Islands, now puts this — this is the number used. That bomb, dropped only 1,200 miles from Guam, is the equivalent of 1.6 or 1.7 Hiroshima bombs every day for twelve years. That’s its total radioactive capacity. And Guam being so close and downwind, we have downwind exposure.


And that’s yet another reason why we’re always at the Congress, you know, throwing ourselves on the funeral pyre of the US Congress, or the UN, like we were on this trip, and we went to the United Nations, as well, to basically keep articulating these rights or trying to get — at least as far as the US is concerned, trying to get compensation for radiation exposure. And there’s no real acknowledgement. It hasn’t happened yet. The Chamoru people of Guam experience such an alarmingly high rate of cancer. So that’s a legacy.


JUAN GONZALEZ: And, of course, in Congress itself, your representation is limited to one non-voting representative?


JUAN GONZALEZ: So the people of Guam are US citizens but cannot vote in any kind of federal elections at all.


JULIAN AGUON: Yes. The document that purports to be our foundational or constitution document is actually a document passed by the US Congress, or the Organic Act of 1950, passed on August 1st, 1950. Basically, by virtue of that act, we are statutory citizens. US citizenship was extended to us. However, we’re not allowed to vote for the US president, and we’re not allowed to have a voting — an effective voting representative in the US Congress.


And that’s what’s so ironic, and you hear about — I just heard about the Nobel Peace Prize being awarded to Obama, and that’s great, but for us, it’s really like the US has, you know, really justified its current war on terror, I mean, using all — employing all of the classic language of human rights and international law. And that was my specialty area in law school, international law and human rights, and for indigenous people specifically, as well as for colonized peoples.


And we don’t even have to necessarily talk about human rights in Guam; we’ll settle for civil rights. We just want to vote for president. So, I mean, even in America’s own backyard, nuclear contamination is not cleaned up. We can’t vote for president. We can’t really make changes in the US Congress. Yet, all the decisions made for us are made by people we don’t vote for. I mean, this is such a wildly deficient phenomenon today, I mean, because, really, I mean, I guess the best way to explain the Guam situation is that there’s nothing neo about our colonialism. This is such old school-styled colonialism, it’s unreal. It really is unreal. And I think that’s why the Chamoru people of late, our indignation and our moral outrage is sort of taking a new lease of life.


JUAN GONZALEZ: Well, Julian Aguon, I want to thank you for being with us, a Chamoru civil rights attorney —-


JULIAN AGUON: Thank you so much.


JUAN GONZALEZ: —- and the author of three books, including The Fire this Time: Stories of Life Under US Occupation and What We Bury at Night: Disposable Humanity. 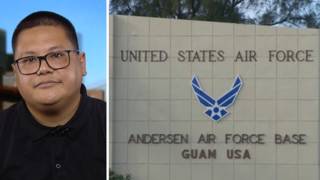