Peruvian indigenous leader Alberto Pizango has been granted asylum in Nicaragua after leading protests against oil and mining projects in the northern Peruvian Amazonian province of Bagua. Over the weekend, an estimated sixty people died after police tried to break up a blockade. We speak to actor Q’orianka Kilcher, of part Indigenous Quechua descent, who is heading to Peru to support the Amazonian protest. [includes rush transcript]

AMY GOODMAN: Peruvian indigenous leader Alberto Pizango has been granted asylum in Nicaragua after an arrest warrant was issued in his name on charges of sedition, conspiracy and rebellion following clashes between Amazonian Indians and Peruvian riot police this weekend. He had sought refuge in the Nicaraguan embassy in the Peruvian capital of Lima Tuesday.


Pizango’s organization, AIDESEP, or the Inter-Ethnic Development Association of the Peruvian Amazon, brings together Amazonian Indian interests from across the country and has fought peacefully to preserve the forests for several years. New laws pushed through by the Peruvian president, Alan Garcia, would parcel up the Amazon rainforest into blocks for commercial exploitation by oil, logging and mining interests.


Pizango’s wife, Sonia Huiñapi said on Wednesday she was nervous about what President Garcia could do to her husband.


SONIA HUIÑAPI: [translated] I am scared about what Alan Garcia is going to do with my husband. He is defending his rights, and Garcia says he’s guilty of everything. He’s not guilty of anything.

AMY GOODMAN: Another indigenous leader in Peru, Vladimiro Tapayuri Mirani, the president of the Amazon Indigenous Committee, said the struggle could only continue and called for an autonomous Amazon state.


VLADIMIRO TAPAYURI MIRANI: [translated] Alan Garcia has violated the rights of the Amazon peoples, implementing anti-Amazon laws without consulting us. Now, indigenous leaders like Alberto Pizango are being persecuted. The struggle does not end when the law is overturned, but when the Amazon is free. We want regional autonomy, an Amazon state. The people have finally realized that capitalism has been hurting our development for many years.


PRESIDENT ALAN GARCIA: [translated] These people are not first-class citizens. Forty thousand natives think they can tell 28 million Peruvians they don’t have the right to come around here? There is no way. That’s a serious mistake. And whoever thinks that way will lead us into irrationality and a backward primitive state.


The entire country is asking for order, energy and action from the government, within reasonable limits, and the authority of the law. That’s what the government is going to do. And any unfortunate incident is entirely the responsibility of these pseudo-leaders, pseudo-natives who are instigating the most poor of people to take illegal and violent action.


Well, my next guest is an outspoken advocate for indigenous rights around the world. She is also an award-winning young actress in Hollywood. She played Pocahontas in the 2005 film The New World, for which she was shortlisted for an Academy Award. Q’orianka Kilcher won the Young Hollywood Green Award this weekend and dedicated her award to Alberto Pizango and his organization AIDESEP. Q’orianka Kilcher joins me now from Los Angeles, shortly before she flies out to Peru, where her father comes from.


We welcome you to Democracy Now!, Q’orianka.


AMY GOODMAN: Why did you dedicate this award to Alberto Pizango?


Q’ORIANKA KILCHER: Well, I dedicated my award to Alberto Pizango, AIDESEP, as well as over 30,000 people in Peru that are protesting right now, peacefully protesting. I dedicated it to them to show my solidarity with them and also to shed light onto it. And I spoke about it at the awards and informed Hollywood of it. And a bunch of people were outraged. And it was appalling to see that absolutely pretty much nobody knew what is happening in Peru. And it was to inform people and to stand in solidarity with my brothers and sisters in Peru.


AMY GOODMAN: Q’orianka, your father is from the Peruvian Amazonian rainforest?


Q’ORIANKA KILCHER: Yeah. I am half-Quechua and Huachipaeri from Peru.


AMY GOODMAN: You have with you a spear. Why?


Q’ORIANKA KILCHER: It was gifted to me in 2006 when I went to Peru for the premier of my film The New World. And I started trying to highlight the over-thirty-five-year-long struggle that the Achuar community was facing with Occidental Petroleum, a Los Angeles-based company, you know, drilling there, using practices outlawed in the United States, pumping an average of 850,000 barrels of toxic waste in one day on one block alone, and dumping it into the rivers, not using reinjection. And so, I tried to highlight that. And Alberto Pizango and AIDESEP gave me this spear, as well as gave me a silver plate, and named me the voice of the indigenous peoples of AIDESEP. And, yeah.


AMY GOODMAN: Playing Pocahontas in The New World, being recognized for your talent, shortlisted for an Academy Award, what has that meant for you in terms of your work and your speaking out around the issue of globalization and indigenous rights, Q’orianka?


Q’ORIANKA KILCHER: It’s meant a lot, because we live in a day and age where we have the amazing gift and power of film and technology. We are able to point a camera and visually show people, rather than just saying. And I think, in this day and age, we’re really people of visually seeing stuff. So it’s helped so much.


And while The New World was an epic love story, it also showed the beginning of the colonizations of the Americas, which continues today, but it now has a new name, and it’s called “globalization.” And what multinational companies are doing in the Peruvian Amazon is a total disrespect to human life, as well as the environment.


AMY GOODMAN: We’re talking to Q’orianka Kilcher. She’s in Hollywood now. She’s in Los Angeles, but she’s headed to Peru. What do you plan to do there?


Q’ORIANKA KILCHER: I’m really appalled at the misinformation and the copy-and-paste media that is happening in Peru right now. And, I mean, the major media is radicalizing the stance on indigenous peoples, because they are being persuaded by government and they’re owned by multinational companies. And they are copy-and-pasting information that is not accurate. And I want to go there. I want to show both sides. I want to inform them correctly.


I mean, it’s horrible the way the Garcia regime is, in a sense, brainwashing Peruvians to think of its indigenous peoples as second-class citizens, as barbarians, as horrible people, because they are showing on the news every hour — because what happened in confrontations —-


I’ll give you a little bit of a back story. Over 600 police attacked peaceful protesters this last Friday in the Bagua region of Peru. They surrounded them around 2:00 a.m. in the morning, and then around 5:00 a.m., they opened fire on them. The ones that -— there was peaceful protesters. They surrendered. They were shot multiple times, even after being shot once. There was families. There was women. There was children. They opened fire from helicopters. They were throwing tear gas. And Alan Garcia ordered the attack and ordered this massacre on his people. And it was so appalling to see that, because for over fifty-six days, there was a peaceful protest. And then things just switched. Alan Garcia gave the order to attack, gave the order to clear out the blockades that these indigenous peoples were peacefully protesting and blocking, and named the indigenous peoples as terrorists, therefore allowing this massacre on them. And it just —- what they are doing -—


AMY GOODMAN: You’re speaking to us from the United States, though you’re headed to Peru. And I know there’s a major march in Lima tomorrow. Will you be at that march?


Q’ORIANKA KILCHER: Yes. I really do hope so. I really want to be there.


AMY GOODMAN: What would you like President Obama to do?


Q’ORIANKA KILCHER: Part of what is happening in Peru is the free trade agreement with the United States. I wish I had Obama’s cell phone number or something, because, I mean, my people are getting massacred over there, and CNN had a report that they are worried that what happened on Friday in the Bagua region is going to happen within forty-eight hours in the cities of Yurimaguas and Tarapoto. And they’re worried that this is going to happen.


And can I just say that it’s really horrible there. They are dumping bodies to hide the actual count of how many are dead. They’re dumping bodies in plastic bags from helicopters into canyons and rivers. They’re just discarding them.


And, I mean, I would love President Obama to get involved. He is, you know, the hope for the future. He’s the hope for the young people. And I just urge him to step up, because part of what is happening is the free trade agreement with the United States. This is one of the laws passed which opens up the Peruvian Amazon to extractive companies to allow easy access. And, I mean, I’m not too involved with the political side. I’m still trying to wrap my head around it myself, because it’s so much. But, yeah.


AMY GOODMAN: Well, Q’orianka Kilcher, have a safe trip to Peru, and we hope to get a report back to you on what is happening there, once you are there and see with your own eyes. Q’orianka Kilcher -—


Q’ORIANKA KILCHER: Thank you. And —


Q’ORIANKA KILCHER: Thank you. I just wanted to add one thing to everybody. Just know that we cannot eat, drink or breathe money or profit, and some things don’t have a price. They really have value, though. So, thank you so much.


AMY GOODMAN: Thanks you. Q’orianka Kilcher is a Hollywood actress, outspoken activist on indigenous Peruvian issues and indigenous issues around the world. She was shortlisted for the Academy Award for her role as Pocahontas in the 2005 film The New World. 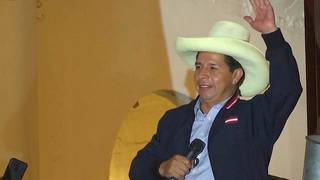