A new report in the New England Journal of Medicine reveals US, Canadian and British health and life insurance firms hold at least $4.4 billion of investments in companies whose subsidiaries manufacture cigarettes, cigars, chewing tobacco and related products. We speak with the co-author of the report, Dr. Wesley Boyd. [includes rush transcript]

JUAN GONZALEZ: Well, as we continue our discussion about healthcare, we turn now to a new report in the New England Journal of Medicine that reveals that US, Canadian and British health and life insurance firms hold at least $4.4 billion of investments in companies whose subsidiaries manufacture cigarettes, cigars, chewing tobacco and related products.


The New Jersey-based Prudential Financial, for example, is a major investor in three tobacco firms, including Philip Morris and Reynolds American. Other insurance companies named in the report include the Sun Life Financial, Northwestern Mutual, MassMutual and Standard Life.


AMY GOODMAN: We’re joined by Dr. Wesley Boyd in Boston, co-author of the report, a faculty member at Harvard Medical School, member of Physicians for a National Health Program. He first wrote about the “tobacco-insurance company connection” in 1995.


Dr. Boyd, welcome. Explain what you have exposed in the New England Journal of Medicine.


DR. WESLEY BOYD: Well, thank you, first of all, for having me.


AMY GOODMAN: So, explain. Go through the record of these insurance companies. It may well shock many people who are watching and listening and reading right now.


DR. WESLEY BOYD: Well, it is pretty shocking. And we first actually looked into this, the insurance industry investments in tobacco, back in 1995. If I could just give a little history, the reason for that initially was that I was — as a psychiatrist, I take care of a lot of patients in a public clinic, having difficulties getting care authorized by the managed care companies and the insurance companies — they were often sort of putting up roadblocks to me doing what I would like to do with my patients, see them as frequently as I need to, and so on — and came to find out back in 1995 that one of the managed care companies, Merit Behavioral, at the time was owned by the leveraged buyout firm Kohlberg Kravis Roberts, which also owned RJR at the time. And so, that’s where the sort of tobacco-insurance connection initially arose.


We looked into holdings back then and in ’95 found that insurance industry, health insurance industry, was heavily invested in tobacco; revisited the issue in 2000, same story, but less so; and then came back today — well, this past year and found, for example, that, as was reported, Prudential owns $500 million — over $500 million of Imperial Tobacco, $871 million worth of holdings in British American Tobacco. Actually, that’s Prudential out of the UK, I’m sorry. Prudential Financial here in the US, they own $69 million of Reynolds American, almost $9 million of Lorillard, and $186 million of Philip Morris tobacco.


MassMutual, which is a life insurance company here in the US, they provide long-term disability coverage for people, as well as long-term care, in general, also heavily invested in the tobacco industry. I can give you numbers if you’d like. Northwestern Mutual was another company we looked at, as well as a couple of UK companies — Prudential, I already mentioned, and Standard Life, both of which are heavily invested in the British tobacco industry. And Sun Life out of Canada, again, same thing, over a billion dollars invested in tobacco.


JUAN GONZALEZ: Dr. Boyd, how do these companies, that supposedly are insuring people in case they get sick, also justify the fact that they’re investing in companies that will make them sick or kill them?


DR. WESLEY BOYD: Well, the short answer is, they don’t try to justify it. Generally speaking, what they do is they deny that our numbers are correct, even though we’re taking it from a publicly available database. The fact is, it seems that any publicly traded company, like these insurance companies that we’re talking about, their first duty is to earn money for shareholders, not to ensure health and well-being of the people that they’re being insured by. So, I don’t exactly know how they attempt to justify it. In one case, they say, “Well, it’s not our — it’s not so much our direct investments in tobacco, as investments that we are doing on behalf of some of our clients.” And I think that’s just a way to sort of sidestep the issue.


AMY GOODMAN: You know, I don’t know if you know the answer to this question, Dr. Boyd, but with this latest news, the Senate approving a measure that would strengthen government regulation over the tobacco industry, which is very significant, senators voting 79-to-17 to give the FDA new authority in overseeing the manufacture and marketing of tobacco, where these health insurance companies stood on this?


DR. WESLEY BOYD: I really don’t know the answer to that. It would be interesting, given how heavily invested in tobacco the insurance industry is.


DR. WESLEY BOYD: Well, right before the letter was published in the New England Journal last week, there were a flurry of emails from one of the companies, essentially denying our numbers, requesting us to pull the piece, saying that we’re going to have to print a retraction, and demanding to know how we arrived at these figures.


And I’ll tell you, the New England Journal sat on our piece for quite some time before they actually published it. I had to send all of my original data sheets in to them. And they, I presume, vetted them fairly carefully. It took them several weeks to go through the numbers and then go ahead and approve publication. And also, a major news outlet, as well, which ran a story about our story, requested me to send my original data sheets to them, as well. They checked the numbers, and everything, you know, worked out fine.


AMY GOODMAN: Finally, are you a member of the AMA, Dr. Boyd?


DR. WESLEY BOYD: I am not a member of the AMA and never have been, actually.


AMY GOODMAN: Well, Physicians for a National Health Program, your organization, many members are. If the polls show that most doctors are actually for single payer, let alone a public health plan, how does the AMA work? I mean, in the American Psychological Association, we know the campaign of people, psychologists within the association, taking on the leadership around the issue of torture. On the issue with the American Medical Association of saying they’re opposed to a public plan, does that represent the majority of doctors in the AMA?


DR. WESLEY BOYD: Well, one of my colleagues, actually, at Cambridge Health Alliance surveyed a broad swath of physicians, both across the country and then across Massachusetts. I’m not sure exactly what the big survey showed, but the — in general, more than half of physicians support a single-payer health program, when you ask them what kind of means of paying for healthcare they most support. But when you ask those same physicians who support single-payer national healthcare what they feel like their colleagues would believe, the majority of them think their colleagues would be opposed to it. So there definitely is, it seems to me, a discrepancy between what most physicians believe about how we ought to, you know, go forward with healthcare reform and what they think most of their colleagues do.


What happens at the AMA, I know that there — I know there are some very good people in the AMA. I know people on the ethics panel, for example, that oversees all the ethical issues at the AMA. You know, very good people, supportive of single-payer healthcare. I don’t know what happens in the leadership such that we get these very sad, very depressing reports that come out, like we saw yesterday.


JUAN GONZALEZ: And, Mark Hannay, I’d like to ask you your expectations now over the summer, as Congress begins to take up healthcare legislation, what you’re hoping, your group is hoping, to accomplish?


MARK HANNAY: Well, I think, essentially, we — it’s going to be fast. This whole thing is going to be over, and the bills are going to be crafted in the next three or four weeks. They’re going to be to the floors and voted on by the 1st of August. Then they’re going to come back in the fall, cobble together a grand bill, hopefully pass it, and will be done by early October. So, it’s fast, fast, fast. That’s the first thing.


I think what we’re hoping to do at this point, at the very least, is to bring the voice of the grassroots, the public, the people, into the conversation, so that it’s not just a conversation between sort of all the usual institutional suspects, like insurance companies and the American Medical Association and the American Hospital Association and so forth, so that we get the perspective of what we, the public, want to see happen in healthcare reform.


AMY GOODMAN: Mark Hannay, we want to thank you for being with us, director of the Metro New York Health Care for All Campaign. And Dr. Wes Boyd, Cambridge Health Alliance and Harvard Medical School, is the leading author in the piece that just appears in the New England Journal of Medicine talking about the billions that health and life insurance industry has invested in tobacco stock. 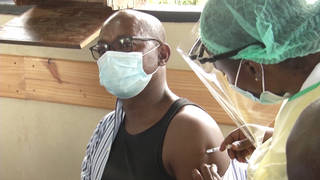