We play an excerpt from a March 2008 speech by Dr. George Tiller before the Feminist Majority Foundation. Discussing his vision for a just and more humane society, Dr. Tiller said, “We’ve given war, pestilence, hate, greed, judgment, ego, self-sufficiency a good try, and it failed. We need a new paradigm that consists of kindness, courtesy, justice, love and respect in all our relationships.” [includes rush transcript]

AMY GOODMAN: We end with the words of Dr. George Tiller. At an event organized by the Feminist Majority Foundation last year, Dr. Tiller discussed his vision for a just and more humane society.


We have given war, pestilence, hate, greed, judgment, ego, self-sufficiency a good try. And it failed. We need a new paradigm that consists of kindness, courtesy, justice, love and respect in all our relationships.


Work hard. Be a leader. Your way of life depends on it. And just look at the rest of the world. That’s the way the anti-abortion segment of our population wants the U.S.A. to be. And how do we do that? We do it the way we have always done things: we fail our way forward. We consider defeat a temporary inconvenience. And we never, ever, ever take no for an answer. Never take no for an answer. Work hard. Be a leader. The rest of your life depends on it, and the life of your sisters and brothers throughout the world depend on it. Thank you.

That was Dr. George Tiller. He was assassinated on May 31st, 2009. Thanks to Marc Bretzfelder for that videotape.


And that does it for our show, as we look at other people who have been assassinated over the years, providing abortion or supporting those who have: March 10th, 1993, Dr. David Gunn of Pensacola, Florida, fatally shot during a protest; June 29th, 1994, Dr. John Britton and James Barrett, clinic escort, were both shot to death outside a Pensacola facility; December 30th, ’94, two receptionists, Shannon Lowney and Leanne Nichols, were killed in two clinic attacks in Brookline, Massachusetts; in 1998, Robert Sanderson, off-duty police officer killed, Dr. Barnett Slepian; and Dr. George Tiller. 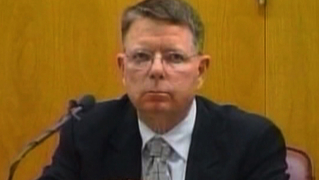