Talks between the ousted Honduran president Manuel Zelaya and the leaders of last week’s military coup began on Thursday in Costa Rica. Zelaya and the military-backed Roberto Micheletti met separately with Costa Rican President Oscar Arias, but there were no face-to-face meetings between the two sides. [includes rush transcript]


To talk about the latest developments, we’re joined by Dr. Juan Almendares in Honduras. He’s an award-winning human rights activist and president of the Honduran Peace Committee, as well as the past secretary of the Coordinating Committee of Popular Organizations. He was an opposition candidate with the Democratic Unification Party during the last presidential elections. Welcome to Democracy Now! again.

JUAN GONZALEZ: Tell us what — the latest, as a result of the talks that were not face-to-face talks, in fact.

DR. JUAN ALMENDARES: Well, we believe that it’s impossible to have a dialogue with the halcones — I don’t know how to pronounce it, the hawks, this bird who is a hunter. So we have the halcones inside Honduras, and they’re very strong supporting and talking about the militaries, who have been repressive, and also the ruling class, who is highly conservative, who have support from ultra-right-wing people from the United States, from Europe. So they feel strong in the military sense, in the repressive sense, in violation of the human rights. So they are violating the human rights of the people of Honduras, and they are talking about dialogue.


I think any dialogue is positive. And the strategy they have is a dialogue at the national level, but with the machine guns. And in the international level, they want to have a dialogue. And they are trying to win time in the process, but this is a hard line in a very repressive —- this is a racist hard line. One of the chancellors of this regime, he was making a racist statement against President Obama. Now they change him to other position, to the position of justice. So that’s a kind of a -—

AMY GOODMAN: — the man that the coup regime put in place as the foreign minister had said several times about President Obama — called him “the little black man who knows nothing about anything.”

AMY GOODMAN: So they’ve moved him into justice.

DR. JUAN ALMENDARES: Yes, now he’s a minister of justice. So, at the international community, we have to understand these are like Pinochet regime.

AMY GOODMAN: We only have a minute, but just the latest. The word is that Micheletti left after his meeting with the Nobel laureate, the President of Costa Rica, Oscar Arias, and also that Mel Zelaya, the ousted Honduran president, left and is now in the Dominican Republic? Is that right?

DR. JUAN ALMENDARES: Well, we don’t know where he was going, President Zelaya. Maybe Guatemala or Dominican Republic, but I am not sure.


But what I want to say is the resistance movements is posing the issue in a way that the problem is not only the constitutional restitution and coming back President Zelaya, the problem is people want a new constitution. People want assembly. People want more participation, more actors in the process. So, this is really very important, because they had to be in the table. They cannot be only discussions between Micheletti and Zelaya. People want to claim justice, justice and justice. 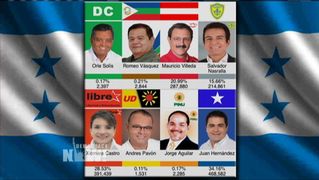