The Obama administration took major steps this week toward helping several major US defense contractors sell sophisticated US arms and nuclear technology to India. Increased US-India nuclear cooperation is stoking fears the US is escalating India’s arms race with Pakistan. We speak to Arjun Makhijani of the Institute for Energy and Environmental Research and journalist Siddharth Varadarajan of The Hindu, India’s leading English-language newspaper. [includes rush transcript]


During her visit to India, Secretary of State Hillary Clinton signed an arms deal that could prove a boon to Lockheed Martin and Boeing. Both firms are in the running to sell India 126 fighter jets at an estimated cost of $12 billion. It is the most lucrative fighter aircraft deal in fifteen years. Richard Kirkland, president for Lockheed Martin in South Asia, said, quote, “This signals an era of increased defense cooperation between the United States and India.”


Speaking in India, meanwhile, Clinton hailed the deal as an important step in US-India relations.


HILLARY CLINTON: I’m also pleased that Prime Minister Singh told me that sites for two nuclear parks for US companies have been approved by the government. These parks will advance the aims of the US-India civil nuclear agreement, facilitate billions of dollars in US reactor exports, and create jobs in both countries, as well as generate much-needed energy for the Indian people.

AMY GOODMAN: India is also moving forward on a deal for US companies to build a pair of new nuclear power reactors. The plants will likely be built by General Electric or Westinghouse Electric at a cost of $10 billion. Before any contracts are signed, the US companies are asking the Indian parliament to pass legislation limiting the liability of the companies in case of nuclear accidents.


To talk more about US-Indian relations, we’re joined by Arjun Makhijani, president of the Institute for Energy and Environmental Research. He’s author of the book Carbon-Free and Nuclear-Free: A Roadmap for US Energy Policy. He’s joining from Rocky Mountain PBS in Denver.


Arjun Makhijani, welcome. Talk about the significance of what, well, is getting almost no attention, and that is, exactly what Secretary of State Clinton is doing in India, both the arms deals and the nuclear negotiations.


ARJUN MAKHIJANI: Well, yes. It’s, I think, a very historic thing. The nuclear negotiations, of course, follow on the US-India nuclear deal, which was approved by the Nuclear Suppliers Group last year, which lays the foundation for India to buy nuclear power plants and other nuclear equipment, as well as get nuclear fuel, from abroad, as a non-member of the Non-Proliferation Treaty.


Now, the setting aside of two parks is kind of very interesting, because this means there would be no open bidding process. They’ve named two sites only for US reactor renders. It’s very curious. And I think it’s a political payback for the promotion of the US-India nuclear deal under the Bush administration.


JUAN GONZALEZ: And this issue of attempting to get changes in Indian law to limit the liability of American companies in any kind of nuclear development?


ARJUN MAKHIJANI: Well, you know, liability is severely limited, even in the United States, to about $11-odd billion, whereas the accident consequences at nuclear power plants are estimated in the hundreds of billions of dollars. I think US companies would want similar liability protections, and it remains to be seen whether the Indian parliament will give it to them.


In the case of the US-Russia negotiations on the use of Cold War plutonium, surplus plutonium from weapons in Russian reactors, and US assistance to do that, the failure to arrive at a liability agreement was a very, very big stumbling block in the completion of that deal.


AMY GOODMAN: We are going to go to India right now.


ARJUN MAKHIJANI: So it might be the same in India.


The request of the United States to exempt US companies from being responsible for any accidents — actually, yesterday on Democracy Now!, we were talking about Bhopal, as we come the twenty-fifth anniversary of the — one of the greatest industrial disasters in the world. What about this?


Siddharth, are you there?


Yes, I didn’t get the last sentence that you said, the very last thing.


AMY GOODMAN: Can you tell us about this exemption that the US is requesting for US companies being exempt from liability for any disasters or accidents?


SIDDHARTH VARADARAJAN: Right. Under current international law, the nuclear industry — or rather, state-owned nuclear enterprises, operate under sovereign limitation — limitations on sovereign liability, if you will. So, for Russian and French nuclear reactors in India, because they’re going to be set up by companies that are essentially publicly owned in their own countries, there is a in-built liability protection, which is not available to Westinghouse or General Electric, because they are completely privately owned companies.


There is a UN convention on limiting liability, the Convention on Supplementary Compensation, another Orwellian name, because its aim is essentially to deny [inaudible] compensation. The US basically wants India to sign and ratify this convention as a precondition for their companies being able to do business.
<P.And this is a topic that has not really been the subject of the domestic debate so far, because there were bigger obstacles that the government of India and the US government had to cross. But now that we are upon the threshold of actual — we’re seeing the entry of American reactor vendors on Indian soil, I suspect that this issue of liability protection is bound to be politically quite sensitive.


JUAN GONZALEZ: I’d like to ask you, in terms of press coverage of Secretary Clinton’s visit in India — here in the United States, there was virtually no attention on these huge deals that apparently she was also trying to negotiate. What kind of attention did either the nuclear deal or the aircraft deal get in the Indian press?


SIDDHARTH VARADARAJAN: Well, her visit received wall-to-wall coverage from start to finish, pretty much. The defense agreement, in other words, getting India to sign an end-user monitoring agreement, and the announcement for reactor parks was, of course, top of the American agenda, and that’s something that she kept insisting on. And that was given fair coverage, although we still don’t know the details. I mean, the government — the text of the defense agreement has not been made public, and I don’t think it will be made public in its full form. Nor do we know, as of now, the specific sites where these two nuclear reactor parks are going to be located. So, you know — but I think in terms of media coverage, yes, I mean, these were obviously considered very important by all of us in the media, even if we don’t have full information right now on what exactly has been agreed.


AMY GOODMAN: Arjun Makhijani, the significance of these billion-dollar deals, on a couple levels — one is the escalation of the arms race and the nuclear arms race with Pakistan. You have, this week, Pakistani officials calling for drones, criticizing the escalation of war in Afghanistan, saying they cannot deal with the militants coming over the border in Pakistan as a result, because their troops are on the border with India.


ARJUN MAKHIJANI: Well, this is going to aggravate Indian-Pakistani tension, certainly, because India is now seen as a long-term strategic partner, whereas Pakistan is an ally, the role is really limited to fighting terrorism. And I think Pakistanis are afraid that once those objectives are accomplished or the US has done whatever it needs to do in Afghanistan, that they won’t matter much anymore, as happened at the end of the Soviet occupation of Afghanistan in 1989. So I think this strategic cooperation with India has the potential to aggravate relations with Pakistan.


Already, the nuclear deal — Pakistan wanted a similar nuclear deal, and the United States said, “No, you have A.Q. Khan. You’re a proliferant country.” And Pakistan turned to China. And the acquisition of the planes really isn’t much to do with Pakistan or China, because India cannot fight a war with China or Pakistan, because both are nuclear-armed states. India wants to stride on the world stage as a major power and has seen its road to that stage as acquiring more and more sophisticated military equipment, a blue water navy, a triad for its nuclear weapons, missiles based in the ocean that are capable of delivering nuclear weapons, and so on — all the hallmarks of what I would say is a twentieth-century power.


JUAN GONZALEZ: I’d like to ask Siddharth Varadarajan, the issue of a natural gas pipeline that India was negotiating with Iran, that was one issue that apparently the Obama administration is concerned about. To what extent was that discussed? And what’s been the reaction among the Indian public to that issue?


ARJUN MAKHIJANI: Yeah, well, you know, the United States very much opposed what was called at the time the peace pipeline a few years ago, because it would go from Iran to Pakistan to India. At the time the US nuclear deal was being negotiated, India had to pass through some hoops in order to get there with the United States. One of those hoops was voting with the United States on sanctions against Iran. India never really agreed to abandon the pipeline, but those votes in the IAEA really did slow them down, and this pipeline has not come to fruition. There’s an Iran-Pakistan agreement to build a pipeline, but the Indian negotiations have dragged on, and it doesn’t seem there’s going to be an end to the negotiations as we’re discussing this today. It seems like a moribund project, if not dead.


AMY GOODMAN: Arjun Makhijani, we want to thank you for being with us, president of the Institute for Energy and Environmental Research — his book, Carbon-Free and Nuclear-Free — speaking to us from Rocky Mountain PBS. And also, special thanks to Siddharth Varadarajan, who was speaking to us from India. He is the national bureau chief at The Hindu newspaper, India’s leading English-language newspaper. 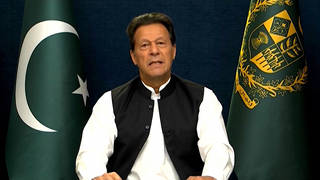