A young Afghan prisoner has returned to Afghanistan following his release from Guantanamo Bay. Mohamed Jawad arrived in Kabul on Monday. He was ordered freed last month after more than six years at Guantanamo. He was as young as twelve at the time of his capture and was tortured and threatened into confessing to throwing a grenade at a US soldier. [includes rush transcript]

SHARIF ABDEL KOUDDOUS: In Afghanistan, election authorities are preparing to publish the first partial results from last week’s presidential election, but the small sample of ten percent may do little to resolve a dispute over the outcome.


The August 20th election was marred by fraud, intimidation, violence and low turnout in many areas. The campaigns of President Hamid Karzai, who is seeking a second five-year term, and his nearest challenger, former foreign minister Abdullah Abdullah, have both claimed victory and accused the other of fraud.


The Electoral Complaints Commission says it’s looking into at least 250 allegations of misconduct. Meanwhile, the government says at least twenty-six Afghan security forces and civilians were killed on Election Day.


AMY GOODMAN: We go now to Afghanistan, where we’re joined by Jonathan Landay, the national security and intelligence correspondent for McClatchy Newspapers. He’s joining us from the capital, Kabul.


Jonathan, welcome to Democracy Now! First, could you talk about the return of the Guantanamo prisoner?


JONATHAN LANDAY: Sure. He returned — Mohamed Jawad returned yesterday, or at least as best we can tell, because, of course, the exact return times were kept secret by the Pentagon, including from his own attorney, his own Marine Corps attorney, who had to fly to Afghanistan on money that was provided by a couple of non-governmental organizations in order to ensure that his client was not slapped into an Afghan prison as soon as he got here. So, as near as we can tell, he arrived very late or very early yesterday morning, was processed at Bagram Air Force Base, which is the main US base here in Afghanistan, about an hour’s drive out of Kabul, and then he was helicoptered into the city.


Now, he was supposed to be taken to the maximum-security prison outside of Kabul called Pul-e-Charkhi, but apparently, due to the intercession of his American attorney, the Afghan authorities agreed to fly him downtown, where he was — he spent time with their attorney general. Last night, he went to see President Hamid Karzai. And then, late last night, he was released into the custody of his uncle.


SHARIF ABDEL KOUDDOUS: We want to turn to Jawad in his own words. He, as you explained, just returned home yesterday, and he explained some of the — his almost six years at Guantanamo and the ordeal that he spent in prison. This is Mohamed Jawad.


MOHAMED JAWAD: [translated] There was a lot of oppression when I was in Guantanamo. And this inhuman action was not for one day, one week or one month; I was oppressed for all the time I was there until I was released. They humiliated all the prisoners very badly. They would insult our religion and our Holy Koran. They were insulting to us and behaving in quite an inhuman way. They tortured prisoners very badly and did not allow prisoners to sleep and did not give us enough food. A lot of prisoners got sick. The treatment was very inhuman, which is against the law of all countries, and that they knew that I was underage, and they didn’t care about my age, either.

SHARIF ABDEL KOUDDOUS: That’s Mohamed Jawad talking about his ordeal at Guantanamo. Jonathan Landay, you just spoke to him. Can you talk more about his mental state?


JONATHAN LANDAY: Yeah, he seems — I spent time with him last night. I was there when he got home, and I spent some time with him this morning. And he seems thoroughly withdrawn. He complains of headaches. He speaks in a very low, soft voice.


I don’t think he really wanted to do interviews today. I think a lot of people were pressing to be able to speak to him, and so he was made available. But, you know, it was my impression from last night and again from this morning that he really is somewhat withdrawn. He’s very quiet, and I think he just wants to be left alone.


AMY GOODMAN: Jonathan, can you talk about his lawyer, Marine Major Eric Montalvo? He flew with him to Afghanistan?


JONATHAN LANDAY: No, he did not. In fact, he was refused permission by the Pentagon to fly with him to Afghanistan. In fact, Mr. Montalvo told me that he had to basically guess when his client was going to reach Afghanistan. He showed me an email from the Pentagon that was telling him that Jawad’s — Mr. Jawad’s arrival here was classified. And he was quite indignant about that. He was quite upset about that.


Also, he had asked the Pentagon to provide him with the airfare to come here and ensure that his client was not immediately put into jail here in Afghanistan and that indeed the Afghan government upheld its agreement not to re-jail him once he got here. They refused to pay his airfare. They refused to pay the airfare of other — two other members of his legal team, his military legal team, that he wanted to bring along. He and his translator flew basically for thirty-six hours straight to get here.


AMY GOODMAN: So, Major Montalvo, it looks like, may well have prevented Jawad from being put in an Afghan prison.


JONATHAN LANDAY: Well, actually, under the Afghan process for Guantanamo detainees who are released, they are generally taken straight to Pul-e-Charkhi prison. There’s a special place where they are — special block where they are put, they are processed out of the system and then released. But that usually takes some time.


We were expecting — I spent some time with the prison head, the director of the prison, yesterday waiting for Mr. Jawad to come back, and he was expecting Mr. Jawad to be brought directly to the prison. And he was expecting then to release him immediately and then put him in a car and send him downtown to the attorney general’s office. And, in fact, he never actually made it out to the prison, and it’s very likely that it was Mr. Montalvo’s intercession with the attorney general that prevented him from being taken out to the prison. 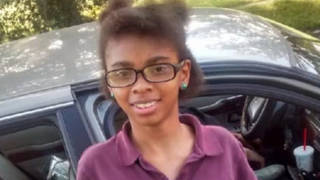