Two veteran Democratic senators, Christopher Dodd of Connecticut and Byron Dorgan of North Dakota, announced this week they would not seek re-election in November. While many consumer groups criticized Dodd’s close ties to the banking and real estate industry, they are even more concerned about Tim Johnson, his likely successor as chair of the Senate Banking Committee, who was the only Democrat to oppose legislation tightening regulations of the credit card industry. [includes rush transcript]

AMY GOODMAN: We move now to national politics in the United States. Juan?


JUAN GONZALEZ: Well, two veteran Democratic senators, Christopher Dodd of Connecticut and Byron Dorgan of North Dakota, announced this week that they would not seek reelection in November, increasing the chance Democrats will lose their supermajority in the Senate after the midterm elections. Chris Dodd made his announcement official on Wednesday.


SEN. CHRIS DODD: I love my job as your senator. I always have. Still do. However, this past year has raised some challenges that insisted I take stock of my life. Over the past twelve months, I’ve managed four major pieces of legislation through the United States Congress, served as chair and acting chair of two major Senate committees, placing me at the center of the two most important issues of our time: healthcare and reform of financial services. I lost a beloved sister in July, and in August, Ted Kennedy. I battled cancer over the summer and, in the midst of all of this, found myself in the toughest political shape of my career.

JUAN GONZALEZ: Many pollsters had predicted Christopher Dodd was likely to lose his seat in November against Republican frontrunner Rob Simmons. Hours after Dodd spoke, Connecticut’s popular attorney general, Richard Blumenthal, a Democrat, said he would run for Dodd’s seat.

Dodd’s approval ratings have fallen following disclosures that he had received discounted loans from the subprime mortgage lender Countrywide and that he helped pave the way for employees of the bailed-out insurance giant AIG to receive $400 million in bonuses.

While many consumer groups criticized Dodd’s close ties to the banking and real estate industry, they’re even more concerned about Tim Johnson, his likely successor as chair of the Senate Banking Committee. Last year, Johnson was the only Democrat to oppose legislation tightening regulations of the credit card industry. Johnson is also the largest recipient in the Senate of campaign donations from payday lenders.


And before we talk about the second surprising announcement — Byron Dorgan — on the issue of Christopher Dodd, Ryan Grim, talk about the significance of the Connecticut senator saying he won’t run again. What do you think is happening here?


RYAN GRIM: This is really terrific news for Wall Street. Intuitively, you might think that because Christopher Dodd is retiring, that kind of frees him to follow his, you know, best, most progressive instincts, and he’ll be tough on Wall Street, and he’ll really craft the reform, an aggressive reform that he’s been working on over the last year and a half or so. But, in fact, it’s kind of the opposite.


Chris Dodd is an example of democracy actually working. The lower he went in the polls, the more populous he had to be, the more aggressive he had to be against the banks and against Wall Street. And so, there was real hope that in order to save his own skin, that he was going to pass some really strong financial regulatory reform. With him retiring, he no longer has that incentive. In fact, his most likely employers are going to be the people that he’s working to regulate at this point.


And there’s also a Senate dynamic that you need to think about. A chairman is powerful because of the threats and the punishment that he can dole out or the promises that he can make in the future. If he’s not going to be around in 2011, then people aren’t going to be as afraid of him, and they’re not going to want anything from him, because he won’t be there to deliver it. So that makes him, you know, a much weaker chairman shepherding this legislation through.


AMY GOODMAN: And the significance of Tim Johnson, his likely successor to be chair of the Senate Banking Committee?


He’s from South Dakota, which is — you know, there’s this thing called the South Dakota loophole. South Dakota is a state that is one of those couple of states — South Dakota, Delaware — that attracts financial firms by telling them that they basically don’t have to follow any laws. All they have to do is set up shop in their state and employ a couple of people in their state, and they’ll let them just run wild.


AMY GOODMAN: Ryan Grim, we’re going to ask you to stay with us, but we have to break right now. Ryan Grim is senior congressional correspondent for the Huffington Post. We’re talking about Christopher Dodd, Tim Johnson possibly replacing him — or is it Jack Reed? — and we’re going to talk about Byron Dorgan, the significance of his announcement that he will not seek reelection. Stay with us.


JUAN GONZALEZ: Ryan, I wanted to ask you, is there another possible scenario on this thing with Dodd’s resignation, that now that he is basically not going to run for reelection, that he is free, basically, in crafting banking legislation, he won’t have to worry as much about the power and the influence of the banking industry?


RYAN GRIM: You know, I mean, that’s what you would think, and that’s certainly what you’d hope. And the New York Times this morning, editorial board, is calling for him, saying, you know, now that you’re free, you know, go left, young man. But, you know, it’s probably not going to work out like that, because the freedom that he now has is to do whatever he wants and whatever is in his own best interest, and what’s in his own best interest is probably to work with the companies that are going to put him on their boards and make them their advisers when the two-year — when the two-year ban is up, you know, then he can start lobbying Congress, as well.


As long as he was worried about reelection, he had to move left. He had to work with consumer advocates, he had to work with progressives, and he had to be tough on Wall Street, in order to get Connecticut voters to send him back to Washington. What he’s also freed from, it’s not just the banks; it’s from Connecticut voters. And so, you know, it’s definitely possible that his inner lefty angel will come out, and he’ll become a Wall Street warrior, and it’s also possible, and I think more likely, that he won’t. But time will tell, and this is something that we’ll be watching really closely.


AMY GOODMAN: While Dodd’s announcement was not surprising, Byron Dorgan’s decision to retire from the Senate stunned many in Washington. The New York Times reported he had been frustrated by the actions of the Democratic Party over the past year for not working hard enough on economic recovery. Dorgan has been a leading opponent of media consolidation and US trade policy. He titled his 2006 book Take This Job and Ship It: How Corporate Greed and Brain-Dead Politics Are Selling Out America.


There’s been some speculation that Dorgan will take a job promoting the coal industry. In his official statement announcing his retirement, Dorgan wrote, quote, “I would like to do some teaching and would also like to work on energy policy in the private sector.”


I wanted to ask you, Ryan Grim, for one quick comment on the significance of Byron Dorgan leaving.


RYAN GRIM: Right. With all my pessimism about Dodd leaving, what that means legislatively, it also means that Democrats are going to maintain that Senate seat in Connecticut. As far as Dorgan is concerned, that means that they’re going to lose a guy who — it’s probably too much to call on the conscience of the Senate, but he was quite a — you know, quite a liberal senator and from a right-wing state, and he’s going to be replaced, most likely, with a Republican. So that is an electoral problem that is going to face the Democrats in 2010, is his departure.


AMY GOODMAN: Ryan Grim, we want to thank you for being with us, senior correspondent for the Huffington Post.

A Look at the Future of TV: Media Consolidation Opponent Byron Dorgan to Retire, Comcast Takeover of NBC Under Review

NEXTA Look at the Future of TV: Media Consolidation Opponent Byron Dorgan to Retire, Comcast Takeover of NBC Under Review 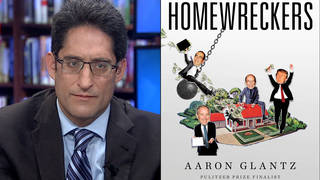