Less than two weeks before the midterms elections, the NAACP has published a new report that exposes what it calls links between various Tea Party organizations and racist hate groups in the United States. The report, 'Tea Party Nationalism,' analyzes each of the six most active Tea Party organizations in the country and describes links between Tea Party factions and various white supremacist groups, anti-immigrant organizations and militias. We speak with Benjamin Todd Jealous, the president and CEO of the NAACP; and one of the authors of the report, Leonard Zeskind, the president of the Institute for Research and Education on Human Rights. [includes rush transcript]

AMY GOODMAN: Less than two weeks before the midterms elections, the NAACP has published a new report that exposes what it calls links between various Tea Party organizations and racist hate groups here in the US. The ninety-four-page report was written by the Institute for Research and Education on Human Rights. It analyzes each of the six most active Tea Party organizations in the country and describes links between Tea Party factions and various white supremacist groups, anti-immigrant organizations and militias. The reports says, quote, “Tea Party organizations have given platforms to anti-Semites, racists and bigots. Further, hard-core white nationalists have been attracted to these protests, looking for potential recruits and hoping to push these (white) protestors toward a more self-conscious and ideological white supremacy.”

In July, the NAACP created a firestorm when the group’s delegates passed a resolution at their national convention condemning racism within the Tea Party movement. The NAACP board of directors ratified the resolution last week.

The new report being released today is called “Tea Party Nationalism: A Critical Examination of the Tea Party Movement and the Size, Scope, and Focus of Its National Factions.”

Ben Jealous is the president and CEO of the NAACP. He’s joining us from Washington, DC. And we’re also joined by Leonard Zeskind, president of the Institute for Research and Education on Human Rights and one of the authors of the report. He’s also author of the book Blood and Politics: The History of White Nationalism from the Margins to the Mainstream.

We welcome you both to Democracy Now! Ben Jealous, let’s start with you. Lay out the scope of this report. These are very incendiary charges, especially right before the midterm elections.

BENJAMIN TODD JEALOUS: We are — this report is here to affirm basic values of civility in this country. This report shouldn’t be controversial. What we’re saying is that there’s no room in the politics of this country, in the discourse in our great town square, for people to stand up and spew racism and xenophobia and call for violence towards minority groups. We have never called the Tea Party racist. We’re not attacking the Tea Party. We’re simply asking them to continue to deal responsibly with the racists in their ranks, as they’ve started to in a very small way.

You know, this summer, we put a small light on them with that resolution, and they responded by throwing out Mark Williams, who had for months had made very racist comments. But after that call, about a week after, they threw him out. Then they followed up with Mr. Ravndal, who appeared on his Facebook page to call for death to gay people, and they threw him out as leader of Big Sky Tea Party. And we’re saying, “Good. Those are good first steps. Keep on going. You’ve got to clean house. If you do so, you won’t just make this country better, you’ll make your own Tea Party better.”

AMY GOODMAN: Leonard Zeskind, with the Institute for Research and Education on Human Rights, talk about the six groups that you analyzed.

LEONARD ZESKIND: We looked first at the core of the movement, which includes Tea Party Express, which is a PAC and doesn’t have any membership on the ground, although it has significant contributors that they float money to candidates with.

The next one in size, actually the second from the smallest, is the one that everybody knows, which is FreedomWorks Tea Party, headquartered here in the DC area. Chair is Dick Armey and is well known and quoted often in the media, but does not have much of a real following.

There’s a Tea Party Nation, which was headquartered in Tennessee, and they’re the ones that had the convention earlier in the year with Sarah Palin. And they’ve got something of a membership.

AMY GOODMAN: And where does white supremacy come into this?

LEONARD ZESKIND: And so, what — well, what you see is at several points. You see white nationalists moving into the Tea Parties. We’ve talked about that for — since the July meeting. We found people from the Stormfront website. We found people from the Council of Conservative Citizens in the Tea Parties. We found some — a board member of the council leading a Tea Party in Florida. So we know that the councils are actually in the leadership of the Tea Party in some local areas.

And then, when we looked at the actual talk of these Tea Parties amongst themselves, for example, we found a number of them where they’re fearful of, you know, the demographic transformation of our democracy, as if that’s going to have something to do with one person, one vote.

AMY GOODMAN: One of the very close races in the country is in Colorado, the Senate race between Democrat Michael Bennet and the Tea Party favorite, Republican Ken Buck. They were on Meet the Press on NBC, and Ken Buck was asked by host David Gregory about the NAACP report.

DAVID GREGORY: There are some serious charges that I want you to respond to. The result of this study contravenes many of the Tea Party’s self-invented myths, particularly their supposedly sole concentration on budget deficits, taxes and the power of the federal government. Instead, this report found the Tea Party ranks to be permeated with concerns about race and national identity and their so-called social issues. Tea Party organizations have given platforms to anti-Semites, racists and bigots. Further, hard-core white nationalists have been attracted to these protests looking for potential recruits and hoping to push these white protesters toward a more self-conscious and ideological white supremacy. If you’re senator, do you think these elements in the Tea Party need to be dealt with and need to be rebuffed?

KEN BUCK: Absolutely. First of all, I haven’t seen it. I’ve been to over 800 events in Colorado in the last twenty months. I have not seen that. And I find it offensive that folks would try to label the Tea Party in that way. It’s just not true in Colorado. I don’t know if it’s true in other states; I haven’t been to the other states. But I can tell you that if there are people that hold those views, they are quickly asked to leave meetings. I have not seen them in meetings.

BENJAMIN TODD JEALOUS: Sure. You know, the whole point of this report is so that people can’t say that they don’t know. And we saw that same sort of response this summer. It was the first response, when we released our resolution calling for them to repudiate racists in their ranks, was to deny. Then they lied and said that we called them racist, which we haven’t called the Tea Party racist. We just said, “Look, you’ve got some racist groups in here. You’ve got some racist leaders in here. You have to deal with them.” And then, within days, they threw out Mark Williams for making racist comments. That’s why you shine a light, because when things are kept in darkness, people often don’t see what’s right in front of them. And so, we’re putting this big light. We’re laying out the facts. We’re showing the links, so people can’t keep their head in the sand and say, “I don’t see it. I don’t see it.” Get your head out of the sand, come into the light. Here’s the report. Now you know. Do something about it.

AMY GOODMAN: What do you want them to do? And what would you say to those like Ken Buck, who say, you know, “I would decry anyone who comes to these groups”? The idea of who they attract — are they responsible for this?

BENJAMIN TODD JEALOUS: Well, first of all, you know, we would say thank you, you know? Just like we said thank you when Tea Party Federation kicked out Mark Williams and when Big Sky Tea Patriots kicked out Mr. Ravndal a few weeks later and when Tea Party Nation issued a statement condemning racism. We’re even glad to see Dick Armey, you know, come out there and try to push more black speakers at Tea Party events. All of those are good signs.

You know, we’re not in this to attack the Tea Party. We are in this to stand up for basic values of inclusion, basic values of civil discourse. We’re in this because we’ve seen in too many Tea Party events, like those ones in Florida where the actual factions are led by members of the Council of Conservative Citizens, the lineal descendant of the White Citizens’ Council. The Council of Conservative Citizens says that black people are not genetically equipped for democracy. And there simply should be no way for one of their board members to affiliate themselves as a leader in the Tea Party, as happened there, as has happened in Missouri. We want the Tea Party, again, quite frankly, to create a better Tea Party, help us create a better country, by continuing to affirm those leaders who have stood up to people like Mark Williams and to keep going further, because there are many other Mark Williams in leadership posts throughout this country in the Tea Party.

AMY GOODMAN: Leonard Zeskind, we only have thirty seconds. What were you most surprised by in the research you did for this report?

LEONARD ZESKIND: I was surprised that five out of the six national Tea Party factions had people in leadership positions or gave voice to the people that said that President Obama is not a natural-born American. The fact that these “birthers” are in the leadership of these Tea Parties, including the Tea Party Nation, the fact that Mr. Buck missed the rhetoric of Tom Tancredo, who bashes immigrants all the time, and he doesn’t think that is racist, that’s a problem.

AMY GOODMAN: We’re going to have to leave it there. Leonard Zeskind and Ben Jealous, thanks so much for being with us. 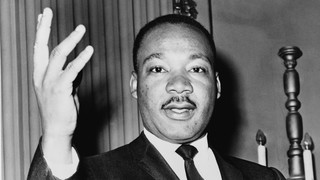