After Thwarted Bomb Plot, US Military Operations in Yemen Could Intensify

After the discovery of two parcel bombs from Yemen in Chicago-bound air cargo last week, the Obama administration is reportedly considering sending elite hunter-killer teams into Yemen to assassinate militants. One plan being considered would see US special forces units sent into Yemen under CIA control, which would give the US greater leeway to strike without the explicit blessing of the Yemeni government. We speak to Wired magazine senior reporter Spencer Ackerman. [includes rush transcript]

AMY GOODMAN: We turn now to the fallout from the discovery of two parcel bombs from Yemen in Chicago-bound air cargo last week. The US, Canada, France and the Netherlands have all suspended cargo flights from Yemen. Britain has banned cargo freight from both Yemen and Somalia, while Germany extended its ban on cargo aircraft from Yemen to include passenger flights. The bombs were hidden in computer printers and discovered at a British airport and a cargo terminal in Dubai on Friday.

The plot was thwarted after a tip from a former al-Qaeda fighter in Yemen who surrendered to Saudi authorities last month. A major military and intelligence operation is underway in Yemen as authorities attempt to track down an alleged Saudi bomb maker who’s a key suspect in the case. Yemen also put Anwar al-Awlaki, a US-born Islamic cleric, on trial in absentia Tuesday, accusing him and two others of plotting to kill foreigners. The charges against al-Awlaki came as part of a separate trial involving the killing of a Frenchman in October.

According to the Wall Street Journal, the Obama administration is considering sending elite hunter-killer teams into Yemen to assassinate militants believed to be connected to al-Qaeda. One plan being considered would see US special forces units from the Joint Special Operations Command being sent into Yemen under CIA control, which would give the US greater leeway to strike without the explicit blessing of the Yemeni government. The White House is reportedly considering adding armed CIA drones to the arsenal against militants in Yemen.

Well, for Yemenis who live in the areas targeted by drones, the attacks threaten everyone, civilians and militants alike.

HASSAN MABKHOUT JABIR: [translated] Most of the people are concerned. The aircraft is crossing the sky day and night, and we don’t know what is behind this. The man in his house is scared. The farmer on his farm is scared. And the student in his school is scared and doesn’t know when he will be struck.

MABKHOUT AL-ERADAH: [translated] People are worried. They fear they will colonized like Iraq and Afghanistan.

AMY GOODMAN: Some voices from Yemen.

Welcome to Democracy Now!, Spencer. What should we understand about what has happened and what the United States government is doing about it?

SPENCER ACKERMAN: The most salient fact right now coming out of the plot appears to be that the bombs may have been designed to go off in mid-air, as opposed to at the Chicago destinations where the parcels were addressed. Apparently, the actual addresses, originally reported to be Jewish community centers, were poor addresses or out-of-date addresses. It looked like they were just trying to get the bombs on board the aircraft in order to detonate them. It’s still not clear why they detonated. In terms of the fallout —

AMY GOODMAN: Why they didn’t detonate.

SPENCER ACKERMAN: — as you reported — exactly, why they didn’t detonate. In terms of the fallout, what you just reported about the CIA and the Joint Special Operations Command operating deeper into Yemen, raises the prospect that perhaps at least an ancillary part of the intention behind the bomb plot was to draw the United States deeper into Yemen. Already, the US is preparing a military aid package worth a reported $1.2 billion to the Yemeni government. It seems like the White House’s counterterrorism adviser John Brennan is on the phone with President Saleh of Yemen nearly, you know, every other week or so. And it’s worth asking whether part of the point of this plot was to get the United States drawn into a third conflict.

AMY GOODMAN: And what about what the US is doing, the Wall Street Journal reporting, you know, the increased drone attacks, and as we hear voices from Yemen, people deeply concerned about being targeted themselves, that, you know, in any war the overwhelming number of people who die are innocent civilians?

SPENCER ACKERMAN: That’s right. And it raises the question of, you know, where will the drones be based? Will the Yemeni government, on claims of plausible deniability, like the Pakistani government does, allow the CIA to fly drones armed with Hellfire missiles from its own territory? What sort of raids will we be seeing? What sort of leeway will the United States have to go after militant targets? And what will happen when, as you point out and as is often in these cases, innocent civilians get caught up in the crossfire?

AMY GOODMAN: And what about the increased CIA role in Yemen? And what will this mean in the region?

The degree to which these agencies will become joined at the hip is still yet to be determined, but while the CIA operates in Yemen, we would also expect to see a greater amount of contractors operating in Yemen, as well. The CIA’s manpower is such that you really wonder if it can rely on just its own operatives or whether it, you know, will require some contract personnel, as well, what the rules for those operatives will be, if they’ll just be logistical support, if they’ll be on tactical intelligence, if they’ll be on the operations side, and how this will all relate with the military, which operates under different rules for engaging in sensitive actions.

You know, hearing that the Joint Special Operations Command will be placed, in some cases, under CIA authority is interesting. It’ll be curious to know if the new Congress will hold hearings on any of this, and if they do, if any of that information will become public about just what the new rules of engagement are for the CIA and for the military in Yemen.

AMY GOODMAN: The New York Times reported on October 31st, American officials said evidence mounting that the top leadership of al-Qaeda in the Arabian Peninsula, including al-Awlaki, was behind the attempted attacks. And then, two days later, they report American and Yemeni officials still have little hard evidence who was involved in the thwarted attack. As for who was behind the plot, evidence remains elusive. Spencer Ackerman?

SPENCER ACKERMAN: That’s right. There’s been no attribution or claim of responsibility. There’s been a lot of intimation that al-Qaeda in the Arabian Peninsula is behind the attack. It’s not hard to see why they would be. The rhetoric that’s come out of AQAP, as it’s called, has been particularly inflammatory. Its involvement in the Christmas Day plot last year demonstrated its desire to attack the United States. The explosive PETN, which is a plastic explosive, was used in this plot, as well as in the Christmas Day plot. But hard evidence hasn’t emerged. It’s curious to see that al-Qaeda in the Arabian Peninsula — maybe it requires a couple days; sometimes it doesn’t happen as rapidly as one expects — would take responsibility for this plot. But right now we’re still sort of waiting to know. One of the people who’s come into the US’s crosshairs, beyond the US citizen and extremist preacher Anwar al-Awlaki, is al-Qaeda in the Arabian Peninsula’s bomb maker Ibrahim Hassan al-Asiri. And reports over the last couple days have indicated that US and Saudi and Yemeni intelligence officials are targeting him as the one who actually planted the bombs — or constructed the bombs, I should say.

AMY GOODMAN: Spencer Ackerman, you’ve written — and we only have like fifteen seconds — “If that sounds like Pakistan 2.0, it should.”

SPENCER ACKERMAN: That’s correct. What we’re seeing right now from some of the reporting that’s come out is a greater increase in very deadly capabilities that are moving into Yemen with very little public debate, like happened in Pakistan.

AMY GOODMAN: Spencer Ackerman, senior reporter at Wired.com, we’ll link to your reports there. Thank you so much for being with us. 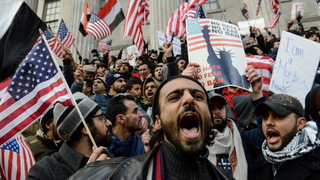