StoryJun 11, 2021“Julian Is Suffering”: Family of WikiLeaks Founder Assange in U.S. to Demand His Release from Prison

AMY GOODMAN: So, Juan, there are major indictments that have come down in a case that you really broke wide open in your pieces is in the New York Daily News.

JUAN GONZALEZ: Yeah, well, yesterday morning, the U.S. attorney for the Southern District announced the arrest of several people. Four of them were former contractors, computer contractors for the City of New York on a huge project that the City of New York has been involved in of automating its payroll system, a whole new new-age computer system to keep time and pay several hundred — 130,000 city workers. And they arrested not only the four computer consultants, but several family members, for a complex scam that involved basically stealing over $80 million in public moneys.

The key — the alleged ringleader of the plot, Mark Mazer, someone who I started writing about back in last December, when I started reporting on the huge salaries that he was making, over $400,000 a year, as a consultant for the city, but over the last year, I kept on reporting on what’s called the CityTime project. And basically, it started out as a $60 million project more than 10 years ago and has ballooned to over $700 million. It could eventually reach a billion dollars by the time it’s finished.

But it’s also — there are key questions about what the Bloomberg administration — this is the biggest scandal of Michael Bloomberg’s era as mayor of New York City. And there are key issues what his — some of his top deputies were doing while all the stealing was going on around them by these computer consultants, especially since Bloomberg prides himself — he made his money in information systems, and he prides himself on his ability to computerize government operations and reduce workers. And here you had a system that was supposed to eliminate waste and fraud in government becoming itself a nexus for waste, fraud and money laundering, because according to the federal complaint, these computer consultants were using a series of shell companies, wiring money to banks, corrupt banks in Latvia and other parts of the world, and then wiring it back to themselves. And so, it is really — governments all around the country are doing the same thing, trying to computerize their operations with these hugely costly computer consultant companies that come in and promise you the moon and the stars and then end up stealing your — getting into the government’s pocket.

AMY GOODMAN: Now, this is especially significant, Juan, because of Mayor Bloomberg’s — the discussion of his possible bid for presidency in 2012.

JUAN GONZALEZ: Yes. And, of course, one of his big — the mantra of Bloomberg is he’s going to bring business-type efficiencies and practices into government operations. And this has become a big stain on the administration. We have to see now whether any other indictments follow. Because this is a criminal complaint, the U.S. attorney has 30 days in which to issue an actual indictment. There’s always a possibility that some of those who are arrested may turn information and agree to cooperate to turn in others who may have been involved in the conspiracy.

JUAN GONZALEZ: No, he didn’t personally know the consultants himself. But some of his top deputies obviously brought them in and then gave them free rein to basically loot the public — the taxpayers’ dollars. 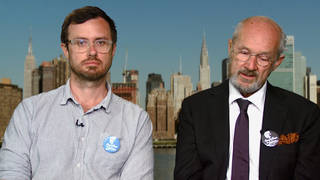 “Julian Is Suffering”: Family of WikiLeaks Founder Assange in U.S. to Demand His Release from Prison