Encouraged by the Obama administration, efforts to expand the number of charter schools are being organized around the country. But concerns are being raised about the system. We speak to UCLA’s Civil Rights Project co-director Gary Orfield about a new study that suggests charter school growth is increasing classroom segregation. [includes rush transcript]

JUAN GONZALEZ: Efforts to expand the number of charter schools are being organized around the country. In Virginia, Republican Governor Robert McDonnell outlined a plan on Wednesday to increase the state’s cap on the publicly funded, privately run schools. In Mississippi, the state Senate passed a bill Tuesday to clear the way for charter schools. Here in New York City, the city’s Panel for Educational Policy recently approved closing nineteen public schools at a time when Mayor Mike Bloomberg was pushing state legislators to lift the cap on charter schools.


Part of the push for the new charter schools has come from the Obama administration. Under a new program called “Race to the Top,” states are competing for $4.3 billion in federal grants for reforming schools. States submitted applications for the money in January. The money will be doled out by Education Secretary Arne Duncan, a strong supporter of charter schools.


Gary Orfield joins us now on the telephone. He’s co-director of the Civil Rights Project at UCLA, author of many books including School Resegregation: Must the South Turn Back? and Dismantling Desegregation: The Quiet Reversal of Brown v. Board of Education.


Gary Orfield, welcome to Democracy Now! Explain the results of your study.


GARY ORFIELD: Very good to be with you.


This study, which was conducted by Erica Frankenberg and Genevieve Siegel-Hawley and Jia Wang, uses a number of different federal data sets with data from all over the country to see how segregated charter schools are and to compare them with public schools and to look at them in a variety of ways.


Basically, what we find is that although public schools have become much more segregated since the Supreme Court changed the law in the 1990s, charter schools are vastly more segregated than that; and that it’s segregation not just by race, but also by poverty; and that there are not only segregated black schools and some segregated Latino schools, but there’s also segregated white schools that overrepresent whites in some states, including California, and some of which have no — appear to have no free lunch facility. So, basically, the system of choice that’s used here doesn’t have the civil rights protections that good magnet schools have, for example. And the Bush administration, as it pushed the growth of these policies, really stopped trying to enforce civil rights in this movement.


So what we’re saying is, these issues really need to be looked at. If we’re going to require or put very heavy pressure on states to increase the number of charters — and most states have relatively few; thirty-five states have just small numbers of students in charters — we’ve got to make sure that there are civil rights provisions attached to them.


JUAN GONZALEZ: Well, Gary Orfield, wouldn’t critics of your study say that because the effort at improving schools through charters have been concentrated in the lowest-performing districts, largely minority districts, that that would tend to lead to higher percentages, let’s say, of African Americans or Latinos in these schools?


GARY ORFIELD: Well, charter schools are actually in many kinds of districts and many kinds of communities, some of which are virtually all non-minority. And for black students, particularly in the East and the Middle West, there is a heavy concentration in central cities, but the charters are even more segregated than the public schools there. And charters aren’t limited by district boundaries the way public schools are. They could draw students from across city-suburban boundary lines, for example.


JUAN GONZALEZ: And what about the issue of Hispanic students, in particular? One of the things that we’ve been seeing here in New York City is that while achievement levels are very low in both the — in many African American communities and Latino communities, that the bulk of the student population for most of the charters is African American, and not Latino, because many of the charters apparently are not addressing the issue of limited-English-speaking students in their population.


GARY ORFIELD: Well, we see some very serious questions about the access of Latino students. Latino students, of course, are the largest minority group in the United States. They’re about 21 percent of the students in the American public schools. They tend to be underrepresented in charter schools, even though they certainly have a need and desire to escape from failing public schools in a good many neighborhoods and communities. And here in California, for example, there’s a significant underrepresentation of Latinos, who are by far the largest ethnic group in the state, and an overrepresentation, a substantial overrepresentation, of whites in charter schools.


One of the problems is English language learners appear to be underrepresented in these schools. We see that pretty clearly in some of our work and in another independent report that was recently issued by a research center at the University of Colorado. We find that we can’t even get good data about how many English language learners are in these schools, because federal government obviously hasn’t been requiring the submission of it. When we looked for the data on California, where, you know, about 30-some percent of the kids who start school here are English language learners, we found that only seven were reported in the whole charter system in California, which is a vast system that has four percent of all the students in the state in it.


So there’s worrisome issues about whether or not the appropriate provisions are being made for these students. Charter schools are public schools receiving public funds, and they are accountable for exactly the same kind of civil rights responsibilities as other public schools. That includes educating English language learners and special education kids. But they appear to be underrepresenting both of these populations.


AMY GOODMAN: What most surprised you, Gary Orfield, about your study?


GARY ORFIELD: Well, I was really surprised by the underrepresentation of Latino students, and I was surprised by the emergence of what appear to be white flight schools. You know, there was a Supreme Court decision back in the 1960s that said if you create a new school district and it increases segregation, it violates the Constitution. Charter schools, depending on the state, are often considered independent, their own school system basically, so we’re creating new schools, new school organizations, that are even more segregated than the existing ones and not doing really anything to try to make sure that doesn’t happen and that students who make these kinds of choices have diversity and all the values that it gives you in terms of academic preparation and preparation for life.


AMY GOODMAN: Well, Gary Orfield, we want to thank you for joining us, co-director of the Civil Rights Project at UCLA, which just issued their report, “Charter Schools’ Political Success is a Civil Rights Failure.” 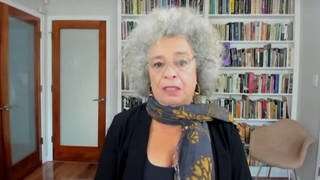