A new investigation from ColorLines Magazine supported by the Nation Institute’s Investigative Fund shows that some poor families are forced to sell their food stamps on the black market for cash in order to survive this prolonged recession. We speak to journalist Seth Wessler, whose investigation focuses on the impact of both the recession and welfare reform in Hartford, Connecticut, a state which has the shortest welfare time limit in the United States. We’re also joined by Luz Santana, a veteran community organizer and welfare rights activist who heads the advocacy group Vecinos Unidos. [includes rush transcript]

JUAN GONZALEZ: The number of Americans receiving food stamps is at an all-time high. Earlier this year, the Agricultural Department said one in eight Americans — nearly 38 million people — received food stamps last October. The New York Times reported that about six million Americans receive food stamps, saying they have no other income.

A new investigation from ColorLines Magazine, supported by the Nation Institute’s Investigative Fund, shows that some poor families are forced to sell their food stamps on the black market for cash in order to survive this prolonged recession.

When Congress overhauled welfare in 1996, it created the Temporary Aid to Needy Families, or TANF, program, which placed time limits on aid and made cash assistance contingent on finding a job.


AMY GOODMAN: Well, TANF is up for reauthorization this fall, and journalist Seth Wessler’s investigation focuses on the impact of both the recession and welfare reform in Hartford, Connecticut, a state which has the shortest welfare time limit in the country, just twenty-one months. Seth Wessler is a senior research associate at Applied Research Center, a think tank on race, and a staff writer for ColorLines Magazine. His article, “Selling Food Stamps for Kid’s Shoes,” is available online at colorlines.com.


We welcome you to Democracy Now! Explain what’s happening in Hartford.


SETH WESSLER: Well, this really is a story about what happens when the Great Recession meets welfare reform from 1996. It’s a story about what happens when people are pushed off of cash assistance by a welfare program that’s intent is to push people off of cash assistance, families trying to raise their children; what people do now that even those low-wage poverty jobs, that families have been stuck in for now a decade and a half, aren’t available.


And so, I spent the winter reporting from Hartford, Connecticut, a city that’s long been hit by the disappearance of manufacturing jobs and is struggling economically to figure out what families are doing now that the recession has hit and there really is no substantive safety net for poor families. And what I found was that people are forced to make very difficult decisions and are forced to trade their food assistance at bodegas for pennies on the dollar in order to make some cash to pay their bills, to pay rent, to buy, in the case of one woman I spent time with — who we’re calling Eva in this story; she asked her name be changed — to buy children’s shoes for her kids. So, people are forced to, in the end, break the law to get by. And what I see this as is a story about poor families innovating to survive in a horribly difficult economy after years of a stripped safety net.


Eva, the woman I spent three months with, talking to, was cut off of cash assistance last March. She’s in the state, Connecticut, with the shortest time limit in the country. After welfare reform, states were given vast amount of power to determine how long people could stay on cash assistance, how generous the program would be. And the state set the shortest time limit of any state of the country. She was cut off of cash assistance in the middle of the worst job crisis in a generation and has been searching for work endlessly without any luck. She’s a woman who’s been working low-wage poverty jobs for the greater part of a decade and now can’t even find one of those. She’s precipitously close to the edge now of becoming homeless, of not being able to feed her kids. And she’s forced to sell her food stamps, like many women who I talked to in Connecticut, in order to get by.


JUAN GONZALEZ: Well, Connecticut obviously also — Hartford is the insurance capital of the United States. It’s one of the states — one of the wealthiest states in the Union. But you have these cities — Hartford, Bridgeport and New Haven — which have desperately poor communities in the central cities. How has Connecticut been dealing, in terms of its food stamp allotment? What does it give to a family? Because, I mean, the selling of food stamps has been in existence for — actually for quite a while in many communities. Has it increased in recent years?


SETH WESSLER: Yeah, I mean, a lot of women I talked to have said that in times when they are out of work, they can’t find a job, and there’s no income coming in, after being cut off, pushed off of the cash assistance rolls, that they have had to sell their food assistance to get by, to trade it at a bodega, to sell it for cash. And it’s become very clear that that trend has increased. It’s become a real way of feeding and paying for rent and clothing families at this point. So it’s definitely on the increase.


I mean, Eva receives $520-something a month in food stamps a month. She’s selling — she’s buying her food with that money. She’s using that money to pay off her debt at the bodega. She has, at the end of every month, about $100 in debt. She’s been — and then she trades in the rest for cash, in order to pay for her basics. And about ten other women in Connecticut said that they had to do the same thing.


I mean, we’re in a situation in which, almost fifteen years ago, the federal government basically decimated the cash assistance program, after another decade and a half of highly racialized attacks against the program that demonized the program, stigmatized the problem deeply. And at the same time, consecutive administrations, Republican and Democratic administrations, have de-stigmatized the Food Stamp Program. And we’re seeing now that that program is on the rise, that there’s more access to that program. So people are leaning more heavily now on that program.


AMY GOODMAN: I wanted to bring Luz Santana into the conversation, longtime community organizer, welfare rights activist in Hartford, Connecticut, director of the advocacy group Vecinos Unidos. This issue of selling food stamps for shoes for the kids, are you concerned that exposing this, Luz, will simply mean they’re going to crack down on selling food stamps, as opposed to dealing with the problem?


LUZ SANTANA: Most certainly, yes, that’s one of the biggest concern, myself and people, because it’s going to be harder for people, you know, because the government, instead of working with us, with community organizations, to try and alleviate the problems that people have and so they don’t have to resort to illegal activities, what they do is make it harder and harder, so people — I’m very concerned that that’s what they will do. Hopefully not, but that’s what the concern is.


JUAN GONZALEZ: And Luz, can you talk about the impact in your city of both the recession and the mortgage crisis, in terms of how more desperate people are becoming?


LUZ SANTANA: Yes, it’s getting — you know, with the — because of what happened, the crash in the economy, it means that a lot more people had to depend on public, on public assistance, had to depend on the government, that — you know, for making ends meet. We had, in organization — in our organization, we have seen a bigger increase of families that used to own a home before, but they no longer own it, because they lost it, you know, due to foreclosure. And, you know, the stories are on and on and on. And so many people, they got really hit so bad, because they were at the edge to begin with. You know, they were at the edge of — they had difficulties before, and now they’ve got bigger, bigger problems. And the problem — the bigger problem we have, that because of the crisis that’s hitting the state, the state resorting to cut programs that are needed for families to survive and to take care of their families and their children.


AMY GOODMAN: Luz Santana, we’re going to have to leave it there on this issue of survival, but we’ll certainly continue to cover it. And Seth Wessler, I want to thank you very much for being with us, of ColorLines Magazine. 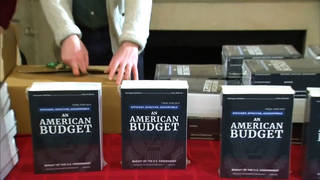