“Schools Chancellor Joel Klein often lauds a small group of Harlem charter schools founded by former City Councilwoman Eva Moskowitz,” writes Democracy Now! co-host Juan Gonzalez in the New York Daily News. “But few New Yorkers are aware of the access Moskowitz has to the chancellor or the special support he has bestowed on her program, whose four schools enroll just 1,300 of the city’s more than 1 million public school students.” [includes rush transcript]

AMY GOODMAN: Juan, following up on our debate on charter schools, you had a very interesting piece in the New York Daily News today.


JUAN GONZALEZ: Yes. Well, my column in the paper today — you know, there was a hearing yesterday in Washington of the Education Committee of the House of Representatives over reauthorization of No Child Left Behind, and the Obama administration wants to double the amount of money being spent across the country on new charter schools. And my column actually dealt with one of the people who testified at that hearing yesterday, the lead person testifying at the hearing, Eva Moskowitz, who runs the Harlem Success Academies, a group of about four or five schools in Harlem.


And I’ve been fighting now for months to get the email correspondence between her and the chancellor of the New York City public school system, Joel Klein. And the Department fought me for eight months. We needed a legal ruling. Our newspaper had to appeal to the State Committee on Open Government to get a legal ruling to force them to turn over the material. They finally did. And we actually published not only an article, my column in today’s Daily News, but on our website you can actually get the entire three-year email correspondence between these two figures.


And what it shows is an enormous amount of direct support by the top person in the public school system to these charter schools, in terms of raising money for them, overruling lower-level officials who were insisting that certain policies don’t allow them to do certain things. A very close relationship between the top chancellor of the New York City school system and this very small charter network leader in Harlem.


And, of course, Harlem has become the ground zero for the battle over charter schools, because there are about twenty-five charter schools in Harlem right now. Hundreds of parents are turning out in meetings. There are battles between pro-charter parents and anti-charter parents. It’s creating enormous divisions not only in New York City but throughout the country, as the government fails to improve the public schools but urges parents to continue to go into charters. So it’s a major issue across the country, and the Obama administration, of course, is coming out on the side of more and more charters and not dealing with some of the fundamental problems for how we improve our public schools.


AMY GOODMAN: Well, we’ll link to that at democracynow.org. 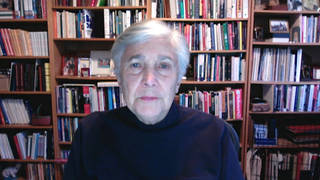