In 1976, Chile, Argentina and Uruguay were engaged in a program of repression, code-named Operation Condor, that targeted their political opponents around the world. The State Department drafted a plan to deliver a stern message to the three governments not to engage in such murders. But the declassified document released Saturday by the National Security Archive shows Kissinger rejected a proposed warning to the government of Uruguay about Condor operations. In a set of instructions cabled to his top Latin American deputy on September 16th, 1976, Kissinger ordered that, quote, “no further action be taken on this matter” by the State Department.


AMY GOODMAN: Five days later, the Chilean exile Orlando Letelier and a colleague were killed in a car bombing later tied to Chilean secret police working through the Condor network.


For more on the document and the history it reveals, we’re joined now by Peter Kornbluh, senior analyst at the National Security Archive and director of its Chile and Cuba Documentation Projects. He’s the author of The Pinochet File: A Declassified Dossier on Atrocity and Accountability.

Explain exactly what you found.


PETER KORNBLUH: Well, we found the missing link in the history of Operation Condor and what the State Department and the US government did after learning about Operation Condor. The documents have dribbled out over the years, and we have had an incomplete picture, until now.


But basically, the key document is a September 16th cable, that Juan just mentioned, where Kissinger rescinds his own instructions, essentially, from three weeks earlier, that a demarche, a diplomatic denunciation, be presented to the key countries involved in what the CIA had learned was going to be plotting international assassinations around the world. Two of our ambassadors had been resistant to delivering this demarche, including our ambassador in Chile and our ambassador in Uruguay. And we can talk about that. But the key document is Kissinger now saying, take no further steps on this matter, and no further steps were taken. And five days later, the most infamous Condor attack carried out in the history of Operation Condor took place right on the streets of Washington, DC.


AMY GOODMAN: And explain what happened.


PETER KORNBLUH: Well, agents of the Chilean secret police, DINA, had come to the United States. They had planted a bomb under the car of a former Chilean ambassador, Orlando Letelier. He was the leading critic and the most effective opponent of the Pinochet regime in Washington, indeed around the world. He was going to work that morning with two colleagues, two young colleagues at the Institute for Policy Studies, Michael Moffitt, who was Orlando Letelier’s assistant, and Michael’s wife, twenty-six-year-old wife, Ronni Karpen Moffitt. The bomb was detonated in Sheridan Circle, right across the street from the residency of the Chilean ambassador. And Orlando Letelier was killed, and Ronni Moffitt was killed, as well.


It was the most egregious act of international terrorism ever to take place in our nation’s capital before 9/11. And just for that matter alone, being an act of international terrorism in our nation’s capital, you would think that, by now, thirty-four years later, we would have the entire declassified record of what actually happened. And now we know that this was a situation where the United States government, Kissinger’s aides, tried to present a demarche that might have deterred this attack, but Kissinger stepped in and kept it from being delivered in the end.


PETER KORNBLUH: Well, I have laid out a chronology of what the CIA learned and when over the years in my book The Pinochet File. John Dinges, in his book The Condor Years, has a very comprehensive account, as well. I’d urge everybody interested to read these.


But basically, Operation Condor was established by Chile, by Pinochet’s Chile, in November of 1975. The head of the Chilean secret police called together all the kind of heads of secret police services from the Southern Cone to Santiago. That was the first meeting, in November of 1975, and then the second meeting, in June of 1976, they came together again and started talking about international assassination, not just rendition, not just collaboration surveilling leftists around the world, but taking steps to actually eliminate people like Orlando Letelier, who had gone into exile beyond, you know, the Southern Cone.


And the CIA learned about these plans right after the June 1976 meeting. And it took them until the end of July to actually tell the State Department to tell Kissinger’s office about this. So Kissinger’s office learned at the end of July, and Kissinger himself is presented with a briefing paper on August 3rd, 1976. And by August 23rd, his aides have pushed him to authorize this demarche that was sent down to Uruguay, Paraguay, Brazil and others, but really focused on Uruguay, Argentina and Chile.


Then you have the US ambassador in Chile basically saying, “Well, Pinochet’s feelings will be hurt, and he’ll be insulted if I tell him, you know, that we think he’s involved in international assassinations. I think that that’s not a very good idea. Give me further instructions.” And you had our ambassador — this is some other documents that we’ve recently obtained through the Freedom of Information Act — our ambassador in Uruguay, Ernest Siracusa, writes back and says, “I’m worried that my life will be in danger if I actually raise this subject here. Why don’t you take the security risks in Washington?”


And so, this is what is presented to Kissinger, and on September 16th he basically writes back and says, “Don’t tell our ambassador in Uruguay to proceed. And frankly, I don’t want any further steps on this matter.” And on September 20th, his deputy —-


PETER KORNBLUH: Well, just on September 20th, Amy, his deputy, Harry Shlaudeman, passes on that exact language to all the ambassadors: “take no further steps on this matter,” because we have had no intelligence that a Condor scheme has been activated. And the bomb in Washington sent off the next morning.


AMY GOODMAN: Do you think that Henry Kissinger knew about the planned assassination of Orlando Letelier?


PETER KORNBLUH: Absolutely not. I don’t believe that there was any conspiracy to help with the assassination of Orlando Letelier. I think this was a cruel coincidence, as Ken Maxwell at Foreign Affairs wrote. But I do think that if Kissinger had understood the importance of following through on this, and had the demarche been delivered when it was supposed to be delivered in late August to Pinochet, I don’t think -— I think Pinochet would have interpreted it as the United States knowing that the Letelier operation was in motion and saying, in a somewhat indirect way to Chile, “We don’t think you should do this, and we’re going to hold you accountable if you do.” And I don’t think Pinochet would have had any other choice but to call off that assassination plan in the heart of Washington, DC, if the demarche had been delivered when it was supposed to be.


AMY GOODMAN: Peter Kornbluh, we’re going to leave it there. We will link to the demarche, and we’ll link to the evidence that you’ve just released at the National Security [Archive]. Peter Kornbluh is a senior analyst there at the National Security [Archive], a public-interest documentation center in Washington, DC. He directs the Archive’s Cuba and Chile Documentation Projects. 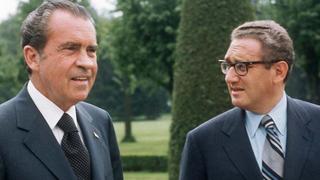