“Massey Disaster Not Just Tragic, but Criminal.” By Amy Goodman Massey Energy runs the Upper Big Branch (UBB) mine in Montcoal, W.Va., where 29 miners were killed last week. The loss of life is tragic, but the UBB explosion is more than tragic; it is criminal. When corporations are guilty of crimes, however, they don’t go to prison, they don’t forfeit their freedom—they just get fined, which often amounts to a slap on the wrist, the cost of doing business. No one makes this clearer than the CEO of Massey Energy, Don Blankenship. He has been the bane of climate-change activists and mine safety advocates for years. This latest mine disaster, if nothing else, will surely bring needed attention to this poster boy for malevolent big business trampling on communities, the environment and workers’ rights.

Days after the Massey explosion, Blankenship admitted in a radio interview: “Violations are, you know, unfortunately, a normal part of the mining process … there are violations at every coal mine in America. And UBB was a mine that had violations.” The Charleston (W.Va.) Gazette has consistently reported critically on Massey Energy and Blankenship, prompting him to attack its editors in a November 2008 speech, saying: “It is as great a pleasure to me to be criticized by the communists and the atheists of the Gazette … would we be upset if Osama bin Laden were to be critical of us? I don’t think so.”

Initial speculation on the cause of the explosion is methane in the mine. The Massey UBB mine has received thousands of citations for violations, including many for failing to remove the methane with ventilation. Another cause may be the mine’s proximity to Massey mountaintop removal operations. Mountaintop removal involves the massive blasting away of mountaintops, providing access to seams of coal, but causing widespread destruction of the environment. The Wall Street Journal reported Monday that a West Virginia state investigation into the explosion will include possible impact of nearby mountaintop mining operations. Environmental Protection Agency Administrator Lisa Jackson issued new rules restricting mountaintop removal on April 1, just days before the Massey explosion. Massey is the principal target of a growing grass-roots campaign against mountaintop removal. Among those arrested at protests have been renowned climate scientist James Hansen, director of the NASA Goddard Institute for Space Studies, and actress Daryl Hannah.

Sixteen miners died in Massey mines between the years 2000 and 2007. Elvis Hatfield, 46, and Don Bragg, 33, were killed in January 2006 in the Aracoma mine fire. Their widows sued Massey Energy and Blankenship. At the trial, their lawyers presented a memo written by Blankenship months before the fatal fire, instructing his deep-mine superintendents to focus on extracting coal over safety projects: “If any of you have been asked by your group presidents, your supervisors, engineers or anyone else to do anything other than run coal (i.e. build overcasts, do construction jobs, or whatever), you need to ignore them and run coal. This memo is necessary only because we seem not to understand that the coal pays the bills.”

Coal pays the bills. And pays Blankenship’s salary, which, estimated by The Associated Press at $19.7 million, is the highest in the coal industry. Blankenship, who is a board member of the U.S. Chamber of Commerce, is a fierce opponent of organized labor, a relentless denier of climate change and a staunch opponent of regulation. He said of government regulators, last Labor Day at an anti-union rally, “The very idea that they care more about coal-miner safety than we do is as silly as global warming.”

Blankenship poured $3 million into the election campaign of a candidate for the West Virginia Supreme Court, in order to replace a sitting judge who he feared would rule against Massey in an appeal against a $50 million judgment. The candidate he backed, Brent Benjamin, won the seat and voted to overturn the judgment. (The U.S. Supreme Court overturned that decision, citing Blankenship’s funding of the election, and the case served as the basis of John Grisham’s 2008 legal thriller, “The Appeal.”)

Pension funds and other large institutional investors are demanding that Massey fire Blankenship. The last of the 29 bodies of the miners killed in the Massey mine have been recovered. Their deaths should not be counted by Don Blankenship as the cost of doing business, but, rather, should top his criminal indictment.

StoryNov 03, 2021Kumi Naidoo at COP26: Will Rich Countries Deliver Pledged Billions for South Africa to Get Off Coal? 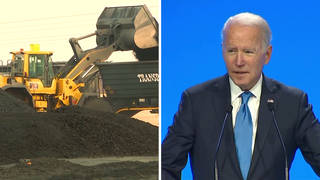