Democracy Now! broadcasts from Detroit, where demolition crews have begun tearing town 3,000 buildings that the city has deemed dangerous as part of an estimated 10,000 buildings set to be demolished over the next four years. City officials claim the demolitions are taking place in abandoned neighborhoods and that they will be replaced with farmland. While the Mayor’s urban renewal plan has high-level backing, many have condemned it as a form of land grabbing. [includes rush transcript]

AMY GOODMAN: We begin today with a look at Detroit’s plans for the Motor City at a time when its population is reeling from the recession and the collapse of two-thirds of the auto industry.


On Thursday, demolition crews began tearing down 3,000 buildings that the city has deemed dangerous. The city plans to use federal grants to demolish all 3,000 structures by the end of the year and tear down an estimated 10,000 buildings over the next four years.


Detroit Mayor Dave Bing announced his plan to downsize Detroit at his first State of the City address last week.

MAYOR DAVE BING: Tonight I am unveiling a plan to demolish 3,000 dangerous residential structures this year and setting a goal of 10,000 by the end of this term. The Obama administration has already committed $20 million through the Neighborhood Stabilization Program to fund this effort, and we are making our case for additional support. We are also going after owners and developers who neglect their property because they think it’s the city’s job to clean up their mess through board-ups or demolitions.

AMY GOODMAN: The city of Detroit claims the demolitions are taking place in abandoned neighborhoods and that they will be replaced with farmland. Mayor Bing says his plan to, quote, “right-size” Detroit will, quote, “attack blight, improve public safety, and make Detroit a more attractive city to live in.”


While the Mayor’s urban renewal plan has high-level backing, many have condemned it as a form of land grabbing. I’m joined now by a vocal critic of the proposed downsizing of Detroit. Sharon “Shea” Howell is an activist and professor of communication and journalism at Oakland University. She writes a weekly column here for the Michigan Citizen.


We welcome you to Democracy Now!, Shea.

AMY GOODMAN: Talk about Detroit. Give us the lay of the land, this what looks like the epicenter of the recession and unemployment in America.

SHARON “SHEA” HOWELL: Well, Detroit is the epicenter, not only of the recession and unemployment, but really the end of major cities that were created by industrial production. Detroit has been the first post-industrial city to face the question of how do we reinvent ourselves now that the large-scale mass production that made us no longer exists anywhere in the United States?

AMY GOODMAN: Talk about what’s happening now and what the Mayor has announced. We’re talking about, at this point, the demolition of a portion of Detroit.

SHARON “SHEA” HOWELL: Yes. In some ways, what the Mayor is talking about is nothing new. Every mayor since 1958 has tried to demolish abandoned structures in the city, because since 1950 our population has been shrinking, not growing. Since 1950, we have gone from nearly two million people to less than a million. So we do have a problem of abandoned structures. No one is saying he should not knock down abandoned buildings. What we’re saying is he should not use eminent domain to demand that people leave their homes that they’ve preserved through all of this shrinking, and we’re saying he should not turn this land over for industrial farm use or any other unknown purpose that he has yet to articulate.

AMY GOODMAN: Who determines what areas get bulldozed and what remain?

SHARON “SHEA” HOWELL: Well, currently, it appears that the Mayor is determining that, although he has not shared with anyone, neither the citizens nor the city council, what criteria he is using to demolish any of these structures. And if you look at previous demolition efforts, those have been driven by concerns for public safety and by concerns for school locations to protect schoolchildren from walking around abandoned houses. But the Mayor’s criteria has not been shared with anyone. And most housing surveys say that 95 percent of the housing stock is still in fair to good condition, so some of what he’s demolishing are really houses people could live in.


AMY GOODMAN: Can you talk about the role of philanthropists here in Detroit?


SHARON “SHEA” HOWELL: Well, a year ago, I would have probably had a better view of philanthropists than I do now. But what we’re facing now is that the major philanthropic organizations, who have absolutely no public accountability, are pouring money behind both the demolition efforts and to target some neighborhoods that they will develop and other neighborhoods that they will let fall. So our philanthropic organizations, without public accountability or any public discussion, are reshaping the face of the city on a vision they have not even bothered to share with the citizens.

SHARON “SHEA” HOWELL: Well, some of it is Skillman, Kresge, Kellogg, and there are a couple of — they say there are fifteen, all together, so I don’t know all of them, but those are the three big ones.

SHARON “SHEA” HOWELL: Well, there are a number of community leaders, and there are probably ten meetings a night going on now. Among them, of course, are Grace Boggs and the Boggs Center for Nurturing Community Leadership. We also have school leaders who are coming forward. We have students who are coming forward, parents, and a huge urban gardening network of small urban gardens that are being threatened by this shift to industrial farming.

AMY GOODMAN: You are one of the founders of Detroit Summer.

AMY GOODMAN: Explain what that is.

SHARON “SHEA” HOWELL: Well, most of the people who left were white, and most of the people who remain are African American. Eighty-six percent of our population is African American. Sixty-six percent of them receive public assistance. The single most important characteristic of Detroit, I think, is to remember that it is a city without resources. Most of our people earn less than $15,000 a year.

AMY GOODMAN: And the unemployment rate right now, and the industry that’s left, where people are being employed in Detroit?

SHARON “SHEA” HOWELL: Well, unemployment is above 20 percent overall officially. Most people think it’s closer to 40 to 50 percent when you look at the actual people who’ve dropped out of the count. And when you talk about groups like young African American men, you’re talking unemployment of upwards to 70 percent.

AMY GOODMAN: Final words for people who are watching this broadcast, listening to the broadcast, perhaps reading it somewhere in the world, in understanding where Detroit is and where you would like to see it be?

SHARON “SHEA” HOWELL: Well, Detroit has the opportunity to really reinvent what cities of the future could look like, in the most visionary and broad sense. And that re-imagining of cities is actually happening in neighborhoods where people are raising their own food, where people are beginning to look after creating small businesses. The real question for Detroit is if we had foundation resources directed at stimulating the imagination and creativity of people in neighborhoods, we could demonstrate that cities of the future could not only be livable, but would be places that inspired all sorts of people about how happy life could be.

SHARON “SHEA” HOWELL: Shea, I want to thank you very much for being with us. Sharon Howell is an activist and professor at Oakland University, a weekly columnist for the Michigan Citizen. We’re broadcasting from Detroit, Michigan. 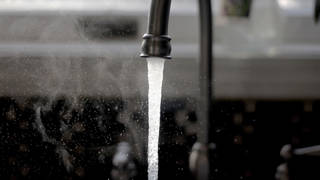