Indigenous leader Art Manuel, former Chief of the Neskonlith Band in British Columbia and spokesperson for the Indigenous Network on Economies and Trade, joins us to talk about the struggle for indigenous rights and sovereignty in the context of the G20 summit. [includes rush transcript]

StoryFeb 13, 2020The Wet’suwet’en Fight Against New Pipeline Spreads Across Canada with Blockades & Occupations

AMY GOODMAN: I’m joined here in Toronto by Arthur Manuel. He is the former chief of the Neskonlith Band in British Columbia and spokesperson for the Indigenous Network on Economies and Trade.


Why are indigenous people coming out into the streets here in Toronto, Art?


ARTHUR MANUEL: Because basically indigenous people are the first ones that are impacted by the major sort of resource extraction-type industries that these big conferences actually, you know, engender in their strategies, you know? And so, we have to let — you know, we are part of the whole process, you know, in the sense that we’re the people that are hurt at the community level, in terms of hunting and fishing and food gathering that we depend on. It doesn’t matter if it’s just North America, but it could be anywhere, in Central, South America, in Asia, you know, all around the world. There’s like 370 million indigenous people globally, you know?


The United Nations on the — passed a declaration called the UN Declaration on the Rights of Indigenous People. A hundred and forty-one nations voted in favor of it; four voted against it: you know, Canada, the United States, Australia and New Zealand. And those are very key players in the G8/G20 equation. And those are the people that indigenous people come to the streets to let the government know that you need to deal with indigenous issues, too, in your global plans, because it’s indigenous people that actually are the ones that fight against a lot of these big dams, you know, the tar sands. All these big issues that are happening out there is indigenous people. You know, in Canada, we’ve been to court constantly, you know, the Supreme Court, fighting against these things, big developments, more so than even some of the environmental groups, because our people really depend on the ecological biodiversity that is damaged by these kind of things. And we don’t want the G8 and the G20 to circumvent the rights that we’ve gotten recognized, like in the UN, you know, and through the colonial — I mean, the Convention on Biological Diversity.


AMY GOODMAN: Art Manuel, talk about your case against the WTO. When did it happen, and what happened?


ARTHUR MANUEL: Well, in our case, there was a dispute between Canada and the United States on Canada softwood lumber dispute, they called it. Canada exports about $10 billion worth of two-by-fours to the United States. And the small mill owners in the United States felt that Canada wasn’t charging fair market stumpage on timber being exported, so they initiated an action which resulted in the US Department of Commerce imposing a 27 percent countervailing duty on Canada two-by-fours. And Canada brought it to the World Trade Organization.


And so, we interceded with an amicus curiae submission. And our submission basically said, under WTO subsidy law, that the Canadian policy of not recognizing judicially recognized, constitutionally protected aboriginal treaty rights is a cash subsidy to the Canadian forest industry, and the World Trade Organization accepted it, you know? And so, basically it’s saying that indigenous people are subsidizing the Canadian economy through our rights not being recognized.


And we also had the same thing happen with regard to the North American Free Trade Agreement. Canada went there. We put in a submission. And Canada actually hired lawyers in Washington, DC to argue against us, and we won. The submissions were accepted, which basically means Canada, as a country, you know, has aboriginal treaty rights that have been recognized by the courts, protected by the Constitution, but they will not recognize it politically, and which makes indigenous people poorer, because our rights as indigenous people are not recognized in decision making with regard to access and benefit sharing with regard to our natural resources in this country, which means that that’s what’s being talked about here at G8, G20, is actually the land and the resources of indigenous people. But we’re totally left totally out of the picture at this level.


AMY GOODMAN: Given this is a global summit, G8/G20, are you having global meetings with other indigenous leaders and activists from around the world? And have they come here?


ARTHUR MANUEL: We have had — we do have meetings constantly, you know, like in terms of indigenous peoples’ caucuses and forums at the global level. We do have — annually, the United Nations has the Permanent Forum on Indigenous Issues in New York City, and the indigenous people do get together in the form of a global indigenous peoples’ caucus, and we do talk about these kinds of issues. The next big session that we’ll probably — well, that we will be having is in Nagoya in October, when the Convention on Biological Diversity will be happening. We will be having our global caucus there again. You know, so we do meet. 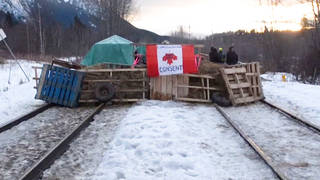