The US State Department is calling on the Rwandan government to release attorney Peter Erlinder, the past president of the National Lawyers Guild. Erlinder has been imprisoned for the past week after being charged with denying the Rwandan genocide. The Rwandan government has been accused of using laws barring genocide denial to silence opposition critics. [includes rush transcript]

AMY GOODMAN: We move now to the US State Department calling on the Rwandan government to release attorney Peter Erlinder, the past president of the National Lawyers Guild. Erlinder has been in prison for the past week, after being charged with denying the Rwandan genocide. The Minnesota-based attorney was arrested shortly after arriving in Rwanda to help with the legal defense of opposition presidential candidate Victoire Ingabire, who has been accused of promoting genocidal ideology. The Rwandan government has been accused of using laws barring genocide denial to silence opposition critics. Peter Erlinder was interviewed May 23rd, shortly before he arrived in Rwanda.


PETER ERLINDER: My first obligation, of course, is to meet with my client, Victoire Ingabire, and to discuss the situation in which she finds herself. I understand she’s under house arrest or limited travel circumstances and that her passport has been seized. But, of course, the first order of business is to see to her condition.


REPORTER: Many analysts say that this is a political trial, this is going to be a political trial. And your name has been mentioned by the newspapers in Kigali, by the prosecutor, as one of the lawyers who are abusing of their position and their scholarship to promote genocidal ideology. How do you think you’re going to be welcomed in Kigali?


PETER ERLINDER: Well, if Kigali is a country that respects the rule of law and concepts of freedom of expression and freedom of speech, I should be treated as any other professional would be. Of course, how I’m treated will tell us a lot about the nature of the government and the nature of the prosecution against Madame Ingabire.

AMY GOODMAN: That is Peter Erlinder just as he was arriving in Rwanda.


We’re joined in Washington now by two guests. Scott Erlinder is the brother of Peter Erlinder and a professor of law at DePaul University. David Gespass is president of the National Lawyers Guild.


David Gespass, let’s begin with you. Explain why Peter Erlinder is being held and what’s being done to release him.


DAVID GESPASS: Well, from our point of view, he’s being held because he was acting as a vigorous, conscientious advocate for his clients. Virtually everything he has said has been in the context of representation of clients before the International Criminal Tribunal in Rwanda and the presidential candidate. We have, in the Guild, asked people right now to call members of Congress to keep pressure. The State Department initially was kind of hands-off in their response to us. They said, “All we can do is provide consular services.” They seem to be much more aggressively now approaching the issue and doing what they can to secure Peter’s quick release. And what we are asking people to do is really ask Congress to make sure that the spotlight be placed on this.


I think Peter, in the interview, stated very well what the situation is. Either the Kagame government is willing to allow the allegations that Peter’s making and the claims he’s making to be heard in a open, fair, public, transparent trial, or it’s not. And if it’s not, I think that says a lot about the government.


AMY GOODMAN: Scott Erlinder, you’re Peter’s brother, also a professor of law at DePaul University. We have heard reports that your brother, that Peter Erlinder attempted suicide in jail. Can you explain what you understand?


SCOTT ERLINDER: Yeah, but first let me clarify: I’m not a professor of law; I’m a cinematographer and teach film and video production.


What I understand about this whole suicide issue was that somehow Peter overdosed on medicine. I can’t really imagine him being of the mindset to do something like this, which has, you know, made the family very, very worried, because it’s just so illogical. And I think that, you know, our feeling is, no matter what has happened politically, that at this point, you know, the best thing to do is to get him home, because our contact with him has been very limited, and we’re all just horribly concerned about this. And I just can’t imagine that the government would do what they did, knowing the fact that my brother has — may not have said things that they liked, but that he has just —-


AMY GOODMAN: What is the State Department doing? Have they communicated with you?


SCOTT ERLINDER: Yeah. Most of the contact has been making sure that he’s OK. They’ve brought him a nurse to make sure that he’s being looked at by sort of the American perspective. And, you know, we’ve been getting some fairly decent reports, not only from State, but also from some local lawyers that are there from Uganda. But still, it’s very sketchy information, and, you know, we’re hoping for more. We had a meeting with State yesterday, and we really pushed them to get in there and give us more information and give us a background to what happened.


AMY GOODMAN: David Gespass, President Kagame receives hundreds of millions of dollars from the United States. What leverage does the US have here?


DAVID GESPASS: Well, they can obviously withhold all that money. The United States, of course, is engaged in diplomacy, and they are, I think, less concerned about Peter’s fate than they are about the other issues that are -— they have to address vis-à-vis the Rwandan government. That being said, I think at this point they’re quite concerned about Peter’s fate. And we were told that they have conveyed their concern to every level of the Rwandan government. Certainly —


AMY GOODMAN: David Gespass, we’ll have to leave it there, president of the National Lawyers Guild. Scott Erlinder, brother of Peter Erlinder, a professor at DePaul University. 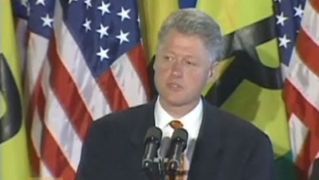