Graphic footage of a man being tortured by police has sparked widespread public outrage in the Philippines and a government probe. The graphic cell phone video shows a man lying naked and bloody on the floor of an alleged police precinct in Manila. A plainclothes police officer is seen whipping him and tugging at a rope tied to the victim’s genitals while screams are heard. Over the past decade, torture, forced disappearance, political killings and imprisonment without trial have become commonplace in the Philippines. We speak to Melissa Roxas, a Filipina American who was abducted and tortured last year in the Philippines. [includes rush transcript]

StoryApr 03, 2020As Virus Spreads in Philippines, So Does Authoritarianism: Duterte Threatens Violence Amid Lockdown

JUAN GONZALEZ: We go now to the Philippines, where extremely graphic footage of a man being tortured by police has sparked widespread public outrage. The Philippine government has begun the process of investigating the incident after it was broadcast on national television. The country’s police chief has suspended an entire police precinct in the capital city of Manila. The Philippines Commission on Human Rights is conducting its own investigation, and Amnesty International urged that the police officers be brought to justice.


The graphic cell phone video shows a man lying naked and bloody on the floor of an alleged police precinct in Manila. A plainclothes police officer is seen whipping him and tugging at a rope tied to the victim’s genitals while screams are heard. Other men are in the backdrop, some of them in police uniform. The Filipino television network ABS-CBN, which first aired the footage Tuesday, indicated that the source of the video is now in hiding. It’s unclear when the footage is from, but the man being tortured was allegedly suspected of being a thief.


AMY GOODMAN: The brutal video surfaces less than two months after the newly elected president, Benigno Aquino III, was sworn into office. Over the past decade, torture, forced disappearance, political killings and imprisonment without trial have become commonplace in the Philippines. Three years ago, Philip Alston, the UN special rapporteur on extrajudicial, summary or arbitrary executions, warned that political killings of dissidents had become, quote, “part of a state policy” on the part of the government and armed forces of the Philippines.


Well, today we’re going to turn to a Filipina American victim of torture. Melissa Roxas is an activist from Los Angeles who was doing volunteer health work in the Philippines last year. On May 19th, 2009, she was abducted at gunpoint from a village north of Manila, held against her will for six days, allegedly subject to physical and psychological torture by military officials. Roxas had previously helped coordinate an American fact-finding delegation to the Philippines focusing on human rights abuses under the former president Gloria Arroyo. Melissa Roxas joins us now from Burbank, California.


We welcome you to Democracy Now! Can you talk about this latest footage and, well, how it relates to what happened to you?


MELISSA ROXAS: Well, of course, it’s very shocking to see video like that, very disturbing. But it only shows what has long been a policy of the police and the military to torture people that are held in their precincts or people that they have abducted. And torture is a regular policy of interrogation in the Philippines. And ever since Gloria Macapagal-Arroyo took the presidency in 2001, a counterinsurgency program called Oplan Bantay Laya has been the campaign in the Philippines that has caused many, many human rights violations to occur. And so, this issue coming to light —-


AMY GOODMAN: Can you talk about what happened to you -—


MELISSA ROXAS: — with the videos, the police videos, is a recorded incident, but there are many, many more that were not captured on video.


AMY GOODMAN: Melissa, talk about what happened to you.


MELISSA ROXAS: Well, what happened to me was I had been doing volunteer work in the Philippines as a human rights activist and also doing health work in the Philippines for more than a couple years. And on May 19th, 2009, when I was in the Philippines conducting surveys for a future health mission in La Paz, Tarlac, me — I was abducted along with two of my companions, Juanito Carabeo and John Edward Handoc, in La Paz, Tarlac. We were abducted at gunpoint at a house where we were resting, and we were forced into a van and brought to a place that is strongly believed to be the Fort Magsaysay, which is the headquarters of the Seventh Infantry Battalion of the Philippine military. And I was held there for six days. During that time, during the first couple of days, I wasn’t fed. I was — the whole time I was blindfolded and handcuffed, and I was subject to beatings and torture, both physical torture and psychological torture during that time. And so were my companions. But we were separated, and I was held in solitary confinement for most of those six days.


AMY GOODMAN: And then what happened?


MELISSA ROXAS: And then what happened is, after I had been disappeared, I was surfaced on May 25th, 2009, and I was dropped off near my uncle’s house in the Philippines. And even after that, the military still kept — they called me and threatened me. They were threatening to kill my family and — if I said anything. And one of the things that they didn’t want me to do, even during the interrogation, was to talk about what happened, to talk about my ordeal, and not to talk to any human rights groups, particularly Karapatan. When I was being interrogated, one of the things that they were forcing me to do was to admit that I was part of a armed rebel — part of the New People’s Army, which of course I denied. I kept asking for — and I refused to admit it, because it wasn’t true. I was an activist there, and I had been working on a health mission while I was there. And I kept repeating my name and saying that I wanted access to a lawyer. And what they kept saying was that “you’re going to die without seeing a lawyer.” And so, I was deprived of my rights to counsel, held incommunicado, and no one knew where I was for those six days, until I was — until I was surfaced.


JUAN GONZALEZ: Melissa Roxas, you mentioned that they were initially alleging that you were part of the New People’s Army. For our viewers and listeners who don’t know of the group, how extensive is the insurgency in the Philippines, and what’s the context of this continuing army repression against other activists in the Philippines?


MELISSA ROXAS: Well, I mentioned earlier that there is a counterinsurgency program. After President Bush declared a war on terror in 2001, Philippines was declared the second front on the war on terrorism. And what has happened since then is that Gloria Macapagal-Arroyo, the president at that time until just recently, 2010, implemented the most brutal campaign called Oplan Bantay Laya, or Operation Freedom Watch in English. But what it has done is that it doesn’t draw a line between armed insurgents and unarmed people, like political activists, people that are critical of Arroyo’s government and policies. And so, what in fact this Oplan Bantay Laya has targeted are mostly what they call leftist or progressive groups in the Philippines. And the over 1,000 cases of extrajudicial killings and over 200 cases of disappearances in the Philippines, not to mention over 1,000 cases of torture, have resulted from this policy that has been implemented in the Philippines. And they are saying — the government is saying that it is supposed to target, to stop the communist rebels, the New People’s Army, in the Philippines, a civil war in the Philippines that has been going on since the '70s. But what, in fact, is really happening is that it is targeting people from legal, progressive, democratic organizations, people's groups, progressive party list members.


AMY GOODMAN: Melissa, we’re going to have to leave it there. We thank you for being with us. You’re very brave to speak out. Melissa Roxas, Filipina American. 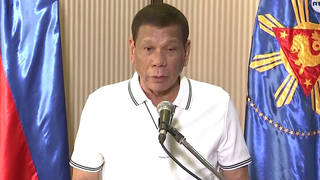