Since the food crisis of 2008, food justice activists have warned that governments in concert with multinational corporations have accelerated a worldwide “land grab” to buy up vast swaths of arable land in poor countries. According to The Economist magazine, between 37 to 49 million acres of farmland were put up for sale in deals involving foreign nationals between 2006 and mid-2009. [includes rush transcript]

AMY GOODMAN: From threats to food safety in the US, we move now to threats to food security and sovereignty worldwide. Since the food crisis of 2008, food justice activists have warned that governments, in concert with multinational corporations, have accelerated a worldwide “land grab” to buy up vast swaths of arable land in poor countries. According to The Economist magazine, between 37 to 49 million acres of farmland were put up for sale in deals involving foreign nationals between 2006 and mid-2009. The purchases are often made in the name of development, but critics see a new means to deprive local populations, especially in Africa and Asia, of their land and their chance at food sovereignty.


Joining us now by Demcoracy Now!

video stream in Burlington, Vermont, is Anuradha Mittal, executive director of the Oakland Institute, a public policy think tank that’s been closely tracking this issue. In a recent report on the land grabs, the Oakland Institute concludes, quote, “Investors are targeting countries with weak laws, buying arable land on the cheap, and failing to deliver on promises of jobs and investments.”


Anuradha, welcome to Democracy Now! We just have a few minutes. As you listened to this description of corporate farming in this country, how has it gone global?


ANURADHA MITTAL: Well, Amy, what David Kirby was talking about is a failed agricultural system. As we know, it’s totally upside down and backwards. And instead of fixing it, we are now sending it overseas, creating these large-scale corporate plantations, all in the name of development and improving food security in poor countries. But instead we are exporting a failed model, and that is causing great threats to food security internationally.


AMY GOODMAN: What do you mean by “food security”?


ANURADHA MITTAL: Well, we have a situation, especially since 2008, that over a billion people, one-sixth of humanity, is estimated to be going hungry. And a majority of them are small-scale farmers. And instead of improving their livelihoods, instead of ensuring their rights to seeds, to water and to land, we have this trend, what you described as “land grabs,” which is rich, wealthier countries, which are food insecure, buying up huge amounts of land in poor nations. Even investors, such as Goldman Sachs, for instance, and hedge funds and sovereign wealth funds, looking for new soft commodities market to invest in, and they’re buying up land instead of ensuring agrarian reform and land reform in poor nations so people have land to grow food for their families and communities.


AMY GOODMAN: What do you mean, Goldman Sachs, for example? How is it involved?


ANURADHA MITTAL: Well, what has happened with the crash of the housing market is that investors have looked for new opportunities in the soft commodities market to invest. And with the price increase of food in 2008 — it was almost 83 percent increased between 2005 and 2008 — they have decided that agriculture is the next hot commodity. So you have hedge funds, you have sovereign wealth funds, which are buying up and leasing land. And we’re talking about unbelievable deals. These are, you know, not just a few hundred acres. We’re talking about thousands and thousands of hectares being bought up for ninety-nine years, leases, for one dollar per year lease. In some cases, you know, 70 percent of the financing has been provided by the host country. No taxes have to be paid, and nothing has to be paid for the first four years. So if you look at some of the prospectus of these hedge funds, they’re promising 15, 20 percent returns, some are promising 30 percent returns, whereas agricultural land in the United States has usually returned of five to six percent.


AMY GOODMAN: Can you talk about the example of Haiti? Over time, before and after the earthquake, when there’s a crisis, how local agriculture is undermined, and also then how it’s strengthened?


ANURADHA MITTAL: Definitely, Amy. I mean, we have a situation, in the name of promoting food security, we have dumped in third world countries, forgetting that the majority of the people in third world nations are employed in agriculture. And when there is hunger in a place like Haiti or in a place elsewhere, say in Africa, it is because the farmers are too poor to buy food. And instead of creating markets, we have dumped subsidized foods. And what David was talking about, this whole farm bill in the United States, which subsidizes huge, big corporate giants, such as Cargill, they can go sell below the cost of production. They can take over markets in poor countries, as was done in Haiti in the case of rice. And when a calamity strikes, instead of building up markets again for the local population, we again send more food aid, destroying the capacity of people to be able to grow for themselves, destroying the markets for the local farmers, and they become dependent on food aid. In fact, they become cheap labor for the US corporations, maquila factories and maquiladoras that might be placed in those countries then.


AMY GOODMAN: Anuradha Mittal, the foreword to the Oakland Institute report “(Mis)Investment in Agriculture: The Role of the International Finance Corporation in the Global Land Grab” is by the farmer and philanthropist Howard Buffett, son of the billionaire Warren Buffett. Howard Buffett writes the following, of land grabbing in Africa, he says, “These deals will make the rich richer and the poor poorer, creating clear winners who benefit, while the losers are denied their livelihoods…[Africa] does not need policies that enable foreign investors to grow and export food for their own people to the detriment of the local population. I’ll be even bolder — such policies will hurt Africa, fueling conflict over land and water…Africa is not a commodity. It must not be labeled 'open for business.'” Your response?


ANURADHA MITTAL: Well, I think Howard could not have said it any better, because what we are seeing is a shocking trend where international financial institutions, including the World Bank, Food and Agriculture Organization, are claiming that agricultural land and sale and lease of agricultural land is a development opportunity for third world countries; it’s a win-win situation; food insecure countries will have access to land to grow food, whereas cash-strapped countries like Ethiopia, Sudan will have cash. The problem is that it is going to increase inequities, that the local benefits and the benefits do not accrue to the local population. And that is why we have been forced to call it a new form of colonization. We have to look at plantations in Latin America that did not bring development to these countries. They created banana republics. And now this trend is spreading across the globe in the name of development, and it needs to be challenged. There are no good case studies of how this foreign direct investment in agriculture can promote development in third world countries. In fact, we have to fight back and ensure land reform is back on the agenda and people have access and control over their land, water and seeds, which is the basis of food security and food sovereignty of any country, any community, and of all peoples.


AMY GOODMAN: What is the most important movement, would you say, to take note of in the world now in fighting back?


ANURADHA MITTAL: Well, Amy, the beauty of it is, the struggle that’s happening at the grassroots level. I’ve been in India, wherein POSCO — the local communities in Orissa, villages in Orissa are fighting back against the South Korean steel company POSCO, which has been trying to take over forest land, denying communities who depend on the forest products for their livelihoods. We know in Madagascar, it was the grassroots revolt which toppled the government, which was selling off half of the country’s arable land to a South Korean company, Daewoo. So, on one hand, we have to support these grassroots struggles, which might not be known internationally, but which are fighting back, because it is a matter of life and death. It is about livelihoods. It is about centuries of doing things of agriculture that they have practiced. At the same time, we have to challenge institutions such as the World Bank, that are once again coming forward with a paradigm, which is going to promote development, which we know is a completely false model and in fact will create these huge, big plantations with small-holder farmers who will become sharecroppers. 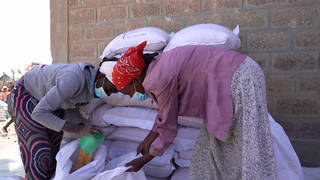