“Security for Everyone, Not Just Settlers and Occupiers”–Ali Abunimah on Opening of US-Brokered Mideast Peace Talks

US-brokered talks between Israel and the Palestinian Authority begin today in Washington. Both sides agreed to sit down last month after the US successfully pressured Palestinian leaders to drop their precondition of an Israeli settlement freeze. On the eve of the summit, Palestinian militants killed four Israeli settlers in the occupied West Bank. We speak with Ali Abunimah, co-founder of The Electronic Intifada. [includes rush transcript]

SHARIF ABDEL KOUDDOUS: US-sponsored talks between Israeli and Palestinian Authority leaders are scheduled to begin in Washington today after nearly two years of stalled negotiations. The talks are expected to be particularly tense in the aftermath of Tuesday night’s attacks near the West Bank city of Hebron that killed four Israeli settlers driving in the area of the Jewish settlement of Kiryat Arba. The dead include two men and two women, one of whom was reportedly pregnant.


PRIME MINISTER BENJAMIN NETANYAHU: We witnessed today a savage murder of four innocent Israelis. There are seven new orphans who were added to the circle of grief in Israel. We will not let the blood of Israeli citizens go unpunished. We will find the murderers. We will punish their dispatchers. We will not let terror decide where Israelis live or the configuration of our final borders.


SECRETARY OF STATE HILLARY CLINTON: This kind of savage brutality has no place in any country under any circumstances. Forces of terror and destruction cannot be allowed to continue. It is one of the reasons why the Prime Minister is here today, to engage in direct negotiations with those Palestinians who themselves have rejected a path of violence in favor of a path of peace.

SHARIF ABDEL KOUDDOUS: The Palestinian Authority, which is participating in the talks, has condemned the attack. This is senior Fatah official Nabil Shaath.


NABIL SHAATH: We have adopted a policy of nonviolence, and we are against the killing of civilians anywhere, Palestinians or Israelis. And I hope that this was not timed to make it even more difficult for us here.

SHARIF ABDEL KOUDDOUS: Hamas spokesperson Sami Abu Zuhri praised the shooting attack, which has been claimed by its military wing, the Al Qassam Brigades. But he denied any link to the timing of the scheduled negotiations in Washington, which Hamas strongly opposes.

SHARIF ABDEL KOUDDOUS: Well, for more on this story, I’m joined right now via Democracy Now! video stream by author and activist Ali Abunimah. He’s the co-founder of The Electronic Intifada and author of One Country: A Bold Proposal to End the Israeli-Palestinian Impasse. His latest op-ed in the New York Times is titled “Hamas, the IRA and Us.”


Welcome to Democracy Now!, Ali Abunimah. Can you just begin by talking about these latest attacks in the West Bank and how they’ll impact these talks in Washington?


Well, the attack on the settlers yesterday in the West Bank was, I think, a gruesome reminder that when there is no serious and credible political process to end Israel’s occupation and apartheid, violence of this kind will fill the void. And we should recall that since the beginning of 2008, a total of sixty Israelis, many of them soldiers, have been killed in conflict-related violence. In the same period, more than 2,000 Palestinians, the vast majority of them civilians, have been killed by the Israeli army and settlers in the West Bank and Gaza Strip. And every one of these deaths, Palestinian or Israeli, is one too many.


You know, when Secretary of State Clinton speaks about savage brutality, I think she should include the recent steep escalation in other forms of violence, including daily attacks by settlers on Palestinians, a sharp increase in home demolitions by Israel, especially in Jerusalem. And, you know, in July alone, according to Human Rights Watch, 146 Palestinian homes and businesses in the West Bank were destroyed by Israel, the highest level since 2005, as well as the entire Bedouin village of El-Araqib in the Negev, which is actually in Israel. So what you see is that Israel’s violence targets Palestinians everywhere, not just in the Occupied Territories.


So this reality of systematic violence, I think, can only breed more of the same, until there is an end to Israeli occupation and the human and political rights of all the people in the country are respected. So, when we talk about security and saving lives, we have to talk about security for everyone, not just for the settlers and occupiers. And we have to have a real political process aimed at ending Israel’s occupation and colonization, not simply creating a fictional Palestinian state in order to disguise them, as the current US-sponsored peace process seems designed to do.


SHARIF ABDEL KOUDDOUS: And Ali Abunimah, your piece in the New York Times is called “Hamas, the IRA and Us,” and in that you draw a parallel between the peace talks that George Mitchell helped broker that eventually brought an end to what’s been called the “troubles” in Ireland. Could you lay out that argument in this last minute that you have and how it — how it paints a picture of what’s not happening right now in these peace talks?


ALI ABUNIMAH: Well, it’s very apt. You know, between Sinn Fein and the IRA, there were some people who supported a ceasefire and entering a political process and others who opposed it. And the same is very much true with Hamas. The military and political leaderships are separate. We don’t know yet enough about who ordered this attack. But it’s very clear that in the case of the IRA, George Mitchell and the United States understood that they had to respond to political overtures from Sinn Fein and the IRA in order to bring them into an inclusive political process. We’ve seen over the past few years many political initiatives from Hamas, including offers of long-term ceasefires to Israel and willingness to take part in a peace process. And the door has been slammed in the face of all those overtures. And what we may be seeing now is the assertion by those who believe in a more violent course. And it will be a tragedy if we see this sort of bloodshed escalate. You know, more than 2,000 Palestinians killed and sixty Israelis in the past three years is enough violence. And I think as long as these one-sided policies continue, it’s going to be very difficult to break this pattern.


SHARIF ABDEL KOUDDOUS: We’re going to have to leave it there. Ali Abunimah is the co-founder of The Electronic Infitada and author of One Country: A Bold Proposal to End the Israeli-Palestinian Impasse. 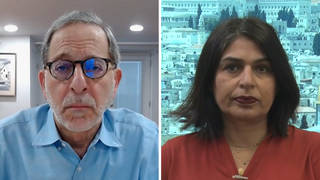