Guitarist Tom Morello, whose great uncle was Kenya’s first prime minister, Jomo Kenyatta, talks about the similarities between his background and President Obama’s. “Other than the fact that we’re devastatingly handsome, half-black dudes with Kenyan fathers, white American mothers, from Illinois, who both went to Harvard, there’s very little in common between us.” [includes rush transcript]

AMY GOODMAN: I also spoke with another star not normally associated with Kenyan independence. In fact, his great uncle was Kenya’s founding prime minister, Jomo Kenyatta. I’m talking about the guitarist Tom Morello of Rage Against the Machine. His newest band with Boots Riley is called Street Sweeper Social Club. I interviewed them both recently in our studio. Tom Morello talked about his own connection with Kenyan anti-colonialism.


TOM MORELLO: My father is Kenyan. My parents met in East Africa. My great uncle is Jomo Kenyatta, who was Kenya’s first president. And my mom went there to teach. You know, they have these — my mom’s from a tiny coal-mining town in central Illinois and somehow got the impetus to travel the world on her own and visited, you know, Germany, China, but ended up in Kenya, where she became part of the — Kenya’s independence struggle, met my father there. And my dad was part of Kenya’s first United Nations delegation. That’s why I was born in the United States.


AMY GOODMAN: So there are some similarities between you and President Obama.


TOM MORELLO: Well, other than the fact that we’re, you know, devastatingly handsome, half-black dudes with Kenyan fathers, white American mothers, from Illinois, who both went to Harvard, no, there’s very little in common between us.


AMY GOODMAN: What do you think about that?


TOM MORELLO: Well, you know, I thought I was the only guy. You know, like when he gave his breakout speech to the world at the Democratic convention, you know, I guess eight — six years ago now, I really couldn’t believe it, because he was basically reading my bio. I’m like, “You’ve got to be kidding me!” And now he’s been on the cover of Rolling Stone more times than I have, so there’s some envy in it.


AMY GOODMAN: So, what has been Kenyatta’s influence on you?


TOM MORELLO: Well, I mean, it was — I grew up in Libertyville when I was a very — I literally integrated the town. I was the first person of color to reside within its borders. And it’s a very — it’s a district where Democrats don’t even run. I mean, that’s how conservative it is. But within that very, you know, at the time, exclusively white, conservative, narrow conservative bastion, you know, we had pictures of Kenyatta on the wall. We had, you know, Kwame Nkrumah’s books. There was, you know, Che Guevara’s Guerrilla Warfare manual. It was one of the things just sort of laying that I was flipping through as a child. So the politics of my home were very, very different than the politics of the community, which I think, when I got to the sort of the age of — the teenage age of rebellion, really helped hone my politics in a way that might not have happened in other circumstances.

AMY GOODMAN: Guitarist Tom Morello. His new band with Boots Riley is called Street Sweeper Social Club, and we will broadcast that full interview in the coming days on Democracy Now! As well, we will post online our interview with Ng?g? wa Thiong’o, and we’ll play it on Democracy Now! 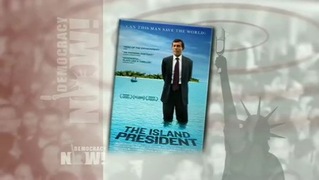