AMY GOODMAN: We continue to broadcast from Bonn, Germany, where the thirtieth anniversary of the Right Livelihood Awards is being held. The Right Livelihood Award was established in 1980 and has become widely known as the “Alternative Nobel Prize.” Some eighty Right Livelihood Award laureates are gathered here in Bonn this week to discuss the world’s most urgent problems, from human rights abuses to climate change, environmental degradation to the fight for global justice. This is a sampling of some of the voices from the conference.


SULAK SIVARAKSA: Sulak Sivaraksa from Bangkok, Siam. I never refer to that country as Thailand, because the word is racism, because the country has many other ethnic people, so that it doesn’t only belong to the Thai. And I work on this issue, I want people to be aware, rise of minorities. And right now in my country, there’s a lot of trouble going on. You know the so-called Red Shirts are working against the Yellow Shirts. The Red Shirts claim that they are the people, and the Yellow Shirts claim that they are — belong to the establishment. In fact, on the 19th, there’s going to be a big issue. That day may be even bloody.


So my role is to try to do something nonviolently to pacify the issues. And I also work on other deep education. My background, of course, is using Buddhist philosophy, cultivating peace within and trying to bring peace to thew world. People should, number one, know oneself. Western education is stressing too much on the head. We want to develop the heart, synchronize the head and the heart, in order that, one, people are mindful, people learn to be respectable, people learn to be humble, people learn that we are all interrelated. Without the trees, we cannot exist. That’s how we have to honor the trees, honor the earth, and honor everyone. In my country, I suppose it’s like elsewhere, but in the poorer countries, much more so — the society doesn’t admit the truth. The society is very much controlled by what people call globalization. But in fact it’s neoliberalism. It’s all capitalism and consumerism. I try to alert people, conscientize people, that this is wrong, greed is wrong, anger is wrong, illusion is wrong, and try to make people understand the whole structural violence.


VESNA TERSELIC: My name is Vesna Terselic. I come from Croatia. It is one of post-Yugoslav countries. And I work on peace building, but in particular on documenting what happened to people who had been either killed or are still missing, have been disappeared, as a consequence of war crimes. And it’s that — what we really want is actually note down a name and family name of each individual. I think that really matters, because it is very important to remember and make a face of somebody who have died or is still missing visible and to remember and to know about circumstances of his or her death or disappearance. And that’s a first step. It’s first step of acknowledgment. So we actually document human losses.


I work for DOCUMENTA, which is a center for dealing with the past. We also record personal memories. And I believe that eventually each victim or family of victim has a right to truth and a right to fair legal procedure. We believe that, in addition, there is also need for regional truth commission, and we are just advocating for now for it, because in our region, in post-Yugoslav countries, more than 120,000 people have been killed and more than 15,000 are still missing. Their families are still searching to any information about what happened to them. And it’s that actually we would like to support this commission to be established by governments, so that it actually can establish facts which have not yet been established and also offer to look on causes and reasons and motivation for violence of the '90s.


GUILLAUME HARUSHIMANA: My name is Guillaume Harushimana. I'm traveling from Burundi. And in my country, I’m working with Centre Jeunes Kamenge, which is a youth center working with young people from sixteen to thirteen years. We began with that project in the northern area of Bujumbura in Burundi. It was just to bring young people to learn how to live together, to learn to them how they can respect — a respect, mutual respect. And it was also to bring people from the different ethnic groups to live together so that to — in order to see how to improve their life. In Burundi, there was a civil war crisis since 1993, and that crisis bring people to be separated because of this ethnical difference. But some of the guys, some of the young people, have make choice, and then they begin to learn how to live together, even they were different — I mean, political differences, ethnic differences, religious differences, things like that.

Johan Galtung on the Wars in Iraq and Afghanistan, Mideast Peace Talks, and Why Obama Is Losing His Base

NEXTJohan Galtung on the Wars in Iraq and Afghanistan, Mideast Peace Talks, and Why Obama Is Losing His Base 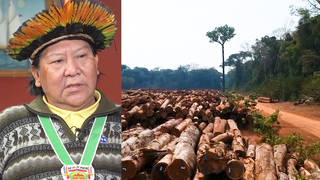