Over 100 people were arrested outside the White House on Monday in a protest calling for the abolition of mountaintop removal coal mining. The rally was part of Appalachia Rising, a multi-day event organized by residents of Appalachian communities impacted by mountaintop removal. The protesters were detained after refusing to leave the sidewalk outside the White House fence. The NASA climatologist James Hansen was among those arrested. We speak to journalist and cultural historian Jeff Biggers. [includes rush transcript]

AMY GOODMAN: Over a hundred people were arrested outside the White House Monday in a protest calling for the abolition of mountaintop removal coal mining. The rally was part of Appalachia Rising, a multi-day event organized by residents of Appalachian communities impacted by mountaintop removal. The protesters were detained after refusing to leave the sidewalk outside the White House fence. The NASA climatologist James Hansen was among those arrested.


In another major action, a group calling itself Black Cross Alliance erected black crosses at coal mining sites in southern Illinois. The group says the crosses symbolize the sacrificing of entire communities for the sake of mining coal.


The actions come as the Environmental Protection Agency is set to decide on whether to cancel a controversial mining project in West Virginia. If approved, the Spruce Number One Mine would be one of the biggest strip-mining projects in all the Appalachian states, impacting more than 2,200 acres of forest and seven miles of streams.


Well, Jeff Biggers is a journalist and cultural historian who has extensively covered mining in the Appalachian region. He comes from a family of coal miners. He has authored a number of books, including The United States of Appalachia and the latest, Reckoning at Eagle Creek: The Secret Legacy of Coal in the Heartland


Jeff, we have about a minute to speak with you. Jeff is talking to us from Peoria, Illinois. Tell us about the protests, from where you are to Washington.


JEFF BIGGERS: You know, I think across the nation, the coal fields really are having a watershed event for the progressive community, Amy. Appalachia Rising made a very compelling point that mountaintop removal only provides eight percent of our national coal production, and so they’re really taking the struggle now to Washington and asking President Obama, to say, “If you can’t even stand up to Big Coal and follow your rule of science,” — you know, the EPA has told us that in fact mountaintop removal creates irreversible damage to our headwater streams — “that if you can’t even stand up to Big Coal and stop one of the most egregious human rights and environmental violations, how can we even begin to discuss comprehensive energy and environmental and healthcare legislation?” So I think Appalachia Rising, like so many coal field communities from Alaska to Alabama to southern Illinois, are really leading the way for the progressive community now to really hold the Obama administration accountable.


AMY GOODMAN: Why yesterday? Why were these mass protests across the country scheduled for yesterday?


JEFF BIGGERS: It’d been actually in the works for months. Of course, I think something very important for Appalachia is this was the anniversary of the march on King’s Mountain, which goes all the way back to the American Revolution, when we were at the verge of losing the American Revolution, and it was mountain people who once again had been threatened with the destruction of their mountains by the British forces, and the mountain people came down and turned the tide of the American Revolution. Once again, it’s Appalachian people. It’s people who are living on the front lines of the extraction industry, anywhere from natural gas drilling to the oil drilling to the coal fields, who actually are saying, “Hey, we have to move forward and really take his battle to Washington to go forward.”


AMY GOODMAN: In thirty seconds, Jeff, what is wrong with mountaintop removal?


JEFF BIGGERS: Mountaintop removal not only is a healthcare crisis, but it creates irreversible damage. It destroys our mountains. We’ve actually destroyed 1.5 million acres of hardwood forest in the carbon sink of America. We have created communities that are completely besieged. It has led to the largest forced removal of American citizens since the mid-nineteenth century.


Today, Amy, at 4:00 this afternoon, when you flick on your light switch and your computers and your radio and your TV, for thousands of Americans in the coal fields, they will be living with flyrock, dangerous silica dust and toxic coal dust. Their water has been contaminated by coal slurry. We really have created these natural sacrifice zones that should no longer exist in the Obama America.


AMY GOODMAN: Jeff Biggers, thanks for being with us, journalist who’s been long covering mining issues — his book, Reckoning at Eagle Creek: The Secret Legacy of Coal in the Heartland — speaking to us from Peoria, Illinois. 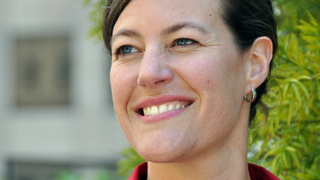