StoryDec 07, 2021As Noam Chomsky Turns 93, He Urges Young People to Create a “Much Better World” Through Activism

AMY GOODMAN: The U.S. Navy says it’s investigating newly disclosed videos showing the now-commander of the nuclear-powered aircraft carrier making homophobic slurs, yelling expletives, mimicking masturbation, and displaying other lewd behavior. In videos that he made for the entire crew in 2006 and 2007, shown to the crew members of the Norfolk-based USS Enterprise during a deployment in the Middle East, the videos feature Captain Owen Honors, who was then the ship’s second in charge, now its top commander. In one clip, Honors makes a homophobic slur while acknowledging some crew members’ complaints about previous videos. Through an editing technique, he appears on the screen playing three different characters.

CAPT. OWEN HONORS: As usual, the admiral and the captain have no idea about the contents of the video or movie this evening, and they should not be held accountable in any judicial setting.

Over the years, I’ve gotten several complaints about inappropriate material during these videos — never to me personally, but gutlessly through other channels. This evening, all of you bleeding hearts — and you, fag SWO boy — why don’t you just go ahead and hug yourselves for the next 20 minutes or so, because there is a really good chance you’re going to be offended tonight.

AMY GOODMAN: The videos’ release comes just weeks before the Enterprise is set to begin a new deployment under Commander Honors’ command. Well, we’re joined now by the reporter who broke this story. She’s Corinne Reilly of The Virginian-Pilot. She’s joining us on the telephone from Norfolk, Virginia. And we’re joined in Washington, D.C. by Eugene Fidell. He is an attorney in private practice, a lecturer at Yale Law School, and president of the National Institute of Military Justice.

But Corinne Reilly, let’s go to you first. How did you obtain these videotapes?

CORINNE REILLY: They were provided to the newspaper by a source who had access to them. I think that’s as specific as I can get at this point. The first time we saw them was Thursday.

AMY GOODMAN: Now, these are not, you know, someone on their cell phone filming a private conversation with now-Commander Honors, though this was made when he was a second-in-command, or one of the top in 2006, 2007. He made these. They have plots. They have — the editing is excellent on these. They’re actual little films that he played for the entire ship.

CORINNE REILLY: That’s right. You know, all aircraft carriers and most Navy ships have public affairs offices that are meant to document and publicize the good work that the Navy is doing while they’re deployed. So our understanding, from speaking with sailors who were on the ship at the time, is that that’s how he was making these videos. He was using the equipment in the public affairs office and sailors who work in the public affairs office with know-how in these kinds of things. But we are told that he was the one who was kind of, you know, masterminding it, coming up with the ideas, coming up with the scripts, and then kind of bringing in help from folks who had that video expertise.

AMY GOODMAN: Corinne Reilly, if you would, describe for us some of these videos that he played week after week for the crew. And explain where they were when these films were being played.

CORINNE REILLY: Well, our understanding is that they were played on closed-circuit ship-wide television. So, basically, anyone who was in front of a television on the ship at the time could have viewed them. There are ships in, you know, wardrooms — or, I’m sorry, there’s TVs in wardrooms and state rooms on the ship, as well as in dining halls. So, you know, around dinner time, if all the sailors are in the mess hall having a meal, this is our understanding of when it was played. We understand that he made at least a few dozen, though we’re told that not all of them contain the kind of material like the ones that we posted on our website, things like anti-gay remarks, lots of sexual jokes. The one that we put up on our website had, you know, sailors in the shower, though it didn’t show nudity, and you could kind of tell that they knew they were being filmed, they were pretending this was part of a skit. But still, there’s definitely a lot of sexual inferences, sexual jokes.

AMY GOODMAN: There are at least two other instances of homophobic slurs. Now-Commander Honors insults a character he also plays, a surface warfare office, or SWO, I think, S-W-O, SWO —

AMY GOODMAN: — and then introduces a video showing two women in the same shower. Let’s play this.

CAPT. OWEN HONORS: Well, I guess we won’t be showing this to the kids at home, will we [bleep] gay SWO boy? See? It’s timeless. Finally, let’s get to my favorite topic, and something foreign to the gay kid over there: chicks in the shower. This is certainly the most popular video of any of the XO movie videos. It’s also the one that’s landed me with the most complaints. This evening, we’ve got some different chicks in the shower in a clip that was previously too sensitive to show. However, we have protected their identities.

AMY GOODMAN: Honors’ video also features a montage of him saying the F-word. This is a clip of that montage.

AMY GOODMAN: This is — who you’re watching now or listening to, though we had to beep it all the way through — is the now-commander of the USS Enterprise that is scheduled to leave — well, Eugene Fidell, attorney, lecturer at Yale Law School, president of the National Institute of Military Justice, scheduled to leave when? And the significance of these videos?

EUGENE FIDELL: Well, I’m not sure when it’s scheduled to leave, but I don’t think Captain Owens — Captain Honors is going to be on board when she does sail. These videos are really a nightmare from the standpoint of the Navy management. An aircraft carrier is not a fraternity house, and the kind of non-leadership displayed in the making of these videos is pretty startling, I must say. Officers have gotten fired for a lot less than this.

AMY GOODMAN: Now, let’s talk about the chain of command, because he wasn’t in charge of the ship, this nuclear-powered aircraft carrier, but they were playing this on the entire closed-circuit system, week after week in 2006, 2007, until a higher-up, who has now been promoted, put an end to it, but did not throw him out. Obviously he, too, has been promoted, Captain Honors, to the position he has now. He’s the head of the ship.

EUGENE FIDELL: Right, Captain Honors was the executive officer, which is the number-two person on a Naval ship. The executive officer is the commanding officer’s alter ego, would naturally stand in for the commanding officer when the CO was ashore or away for any reason. And Captain Honors was a captain at the time. He’s wearing a captain’s rank insignia. So, you can’t palm this off entirely on the management. Captain Honors has got to take responsibility for this. So he will wind up taking responsibility for this.

Now, with respect to the person who was commanding officer during the time these videos were made in 2006 and 2007, I’m sure the Navy is going to investigate this, too, fairly well to find out what that officer knew or should have known about what was going on in the public affairs office and on the ship’s closed-circuit television system. And that officer, I understand, is now a rear admiral. There is an even more senior officer in the picture, and what that officer knew or should have known will also be a matter of official inquiry, I’m sure.

AMY GOODMAN: Rear Admiral Raymond Spicer and Vice Admiral Daniel Holloway, commander of the Enterprise Carrier Strike Group during Honors’ time as XO, they couldn’t be reached for Corinne Reilly’s piece, but I wanted to read the Navy statement about the videos on Friday. They said, “The videos created onboard USS Enterprise in 2006-2007 were not created with the intent to offend anyone. The videos were intended to be humorous skits focusing the crew’s attention on specific issues such as port visits, traffic safety, water conservation, ship cleanliness, etc.

“When the Enterprise Carrier Strike Group leadership noted inappropriate content in the videos, _Enterprise_’s leadership was directed to ensure that any future videos produced conveyed the proper tone and were appropriate for all viewers.

“Production of videos, like the ones produced four to five years ago and now being written about in The Virginian-Pilot, ended immediately after being addressed by Navy leadership.

“It is unfortunate that copies of these videos remained accessible to crewmembers, especially after leadership took action approximately four years ago to ensure any future videos reflected the proper tone.”

Two seconds, Eugene Fidell, your response to this?

EUGENE FIDELL: My response is that the Navy takes this kind of thing very humorlessly. It is a humorless organization on one level. On another level, it is a fact that you need to have —

AMY GOODMAN: We have to leave it there. We’ve only got a second. I want to thank you for joining us.

As Noam Chomsky Turns 93, He Urges Young People to Create a “Much Better World” Through Activism 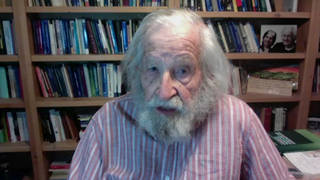 As Noam Chomsky Turns 93, He Urges Young People to Create a “Much Better World” Through Activism