As protests continue against Wall Street and the nation’s biggest banks, we speak to British journalist Ed Vulliamy, author of “Amexica: War Along the Borderline.” Vulliamy exposes how one bank, Wachovia, made millions in the Mexican drug war. At the time, Wachovia was the nation’s fourth-largest bank. It has since been taken over by Wells Fargo. “You can’t drive around Mexico with hundreds of billions of dollars in cash in a semi-artic truck. It has to be banked,” Vulliamy said. “What I found was that it is coming into the United States, into the banking system.” [includes rush transcript]

AMY GOODMAN: We turn now to Mexico, where drug-related violence has surged since President Felipe Calderón sent in the army to fight the cartels when he took office December 2006. The New York Times reported this week U.S. law enforcement agencies have secretly built up networks of Mexican informants that have allowed them to secretly infiltrate some of that country’s most powerful criminal organizations. Typically, Mexico is kept in the dark about the U.S. actions inside Mexico with its most secret informants. The U.S. informants have reportedly helped Mexican authorities capture or kill about two dozen high-ranking and mid-level drug traffickers. In addition, the informants have sometimes given U.S. counter-narcotics agents access to the top leaders of the cartels they’re trying to dismantle.

For more about U.S. involvement in the drug wars in Mexico, we’re joined by Ed Vulliamy, author of Amexica: War Along the Borderline. He’s a writer for The Guardian and The Observer in Britain, and headed back there this week.

Ed, it’s good to have you with us.

AMY GOODMAN: We only have a few minutes.

AMY GOODMAN: So lay out what you have found since the hardcover has come out, and now you’ve released the paperback, Amexica.

ED VULLIAMY: Well, you get a second bite with the paperback. And the original book was a report from the ground, from the rehab clinics, from the streets of Tamaulipas, Juárez and so on. But, you know, the burning question across the board was: what happens to the money? You can’t drive around Mexico with hundreds of billions of dollars in cash in a semi-artic truck. It has to be banked. And what I found was that it is coming into the United States, into the banking system. Now, we have to be careful here, legally. I mean, Wachovia is the bank concerned in this instance. It is in the clear, because there was a deferred prosecution in March. They were clear.

AMY GOODMAN: Explain what you mean. What was Wachovia’s involvement?

ED VULLIAMY: OK, what happened was various signals, various red flags went up regarding inconsistencies. My contact—they were coming through London, traveler’s checks, serially numbered, strangely signed, coming through, and irregularities spotted. And my contact’s name is Woods, put up the alarm. Rather than be sort of thanked for his vigilance, he was basically sort of told to shut up, originally, and then spat out, frankly.

There was a prosecution. There was a settlement in the district court of Miami. And the settlement said—and it was a deferred prosecution, which means no one goes to jail, constructively, and you have to sort of behave for a year, and if you do so, the whole thing is dropped. And we have to say, it has been dropped. Wachovia has since been bought by Wells Fargo, who have cooperated with the investigation. It’s nothing against Wells Fargo.

But what was found was that $110 million—small change—was directly connected to four drug deals in Mexico involving the Sinaloa Cartel, but that the staggering figure of $378 billion—that’s a lot of money—was insufficiently monitored. Now, we don’t know how much of that was connected to drug deals. It could be anything between naught and $378 billion. But it gives us a glimpse of the size, of the volume, the quantity of the money involved. These were coming through things called casas de cambio, holes in the wall, basically, exchange houses, not even a proper banking system. So we have a medium-sized bank, that kind of money.

Then, I thought, well, let’s set this in context. Talked to a man called Antonio Maria Costa, who’s the head of the U.N. Office on Drugs and Crime in Vienna. He’s not there any longer. He posits that the volumes of money coming in from Mexico, from—and obviously his speciality was Europe, Russia, you know, similar operations—laundering of vast quantities of the profits of drugs and, of course, the calamitous violence that is the scourge of Mexico, is basically propping up the banking system. It is a major pillar of the banking system. Without it, it would have collapsed long ago. Well, we know that the other pillar propping it up is tax dollars.

AMY GOODMAN: We’re going to leave it there, but we’re going to do a post-show interview, and we’re going to post it online at democracynow.org. We’ve been speaking with Ed Vulliamy. He is a writer for The Guardian and The Observer, headed back to London. His book is called Amexica: War Along the Borderline, and he’s written the cover story of Harper’s, which we’re going to talk about post-show, which is called “Broken Britain.” 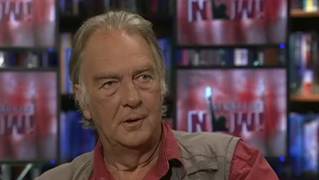