NATO ended its bombing campaign in Libya on Monday. Over the past seven months, NATO aircraft conducted more than 26,500 sorties, including 9,700 strike missions. NATO said it bombed 5,900 military targets inside the country. While NATO Secretary General Anders Fogh Rasmussen hailed the campaign as a success, many analysts say NATO’s intensive bombing campaign violated its U.N. mandate. “The role that NATO played in Libya has been a very, very problematic one, a very troubled one, and ultimately is going to have a very long-term, deleterious impact on Libya’s future,” says Phyllis Bennis of the Institute for Policy Studies. “The notion that the NATO bombings somehow was to do nothing but protect civilians is simply not the case.” Bennis says the Libyan revolution began as part of the Arab Spring, but the NATO intervention turned it into a “Western assault on another North African, Middle Eastern, Arab country.” She also expresses alarm over the rising U.S. military presence in Africa. “Despite efforts to claim that AFRICOM [U.S. Africa Command] is really about healthcare and AIDS education and women’s rights, to be carried out by the U.S. military, we have a very serious reality that Africa now provides more oil to the United States than the entire Middle East.” [includes rush transcript]

StorySep 27, 2011Video Report from Libya: “I Never Expected We Would Be Free”

AMY GOODMAN: NATO Secretary General Anders Fogh Rasmussen was in Tripoli yesterday to mark the end of the military seven-month campaign in Libya. Speaking to Al Jazeera English, he said the mission had been a great success.

SECRETARY GENERAL ANDERS FOGH RASMUSSEN: Our military assessment is very clear. A significant threat against civilian population doesn’t exist any longer. This is a reason why we can now bring Operation Unified Protector to a close. We have fulfilled the United Nations mandate. We have prevented a massacre on the Libyan people. We have saved countless lives. A great success.

AMY GOODMAN: Phyllis Bennis, with the Institute for Policy Studies, your assessment of NATO’s involvement in Libya and what it means for the rest of Africa?

PHYLLIS BENNIS: I think that the role that NATO played in Libya has been a very, very problematic one, a very troubled one, and ultimately is going to have a very long-term, deleterious impact on Libya’s future.

The notion that the NATO bombings somehow was to do nothing but protect civilians is simply not the case. In the last several weeks of the bombing campaign, it was actually escalating against the city of Sirte, which had been a longstanding—it was Gaddafi’s hometown. It included many people in the population who were supporters of Gaddafi, but by far not all of them. And yet, the bombing of that town had been ferocious. There were huge numbers of civilian casualties, many of them caused by the Libyan bombing. I don’t think we have anything close to accurate numbers yet. But the notion that the people of Sirte, the civilians of Sirte, were being protected is simply specious. It’s simply false. The civilians of Sirte were a target of NATO, not being protected by them. So that’s one example.

I think the broader question of the role of NATO was that by bringing in the U.S. and NATO forces, it transformed what had begun as part of the Arab Spring, the overthrowing of a dictator, in the context of the Arab Spring popping up all over the region, and turned that into a Western invasion, a Western assault on another North African, Middle Eastern, Arab country, also an African country, and leaving behind the absolute dependence militarily. You had NATO emerging essentially as the air force of the National Transitional Council, the NTC, that was the self-appointed leadership of the uprising. You have a situation now where the militias that fought against Gaddafi have made clear that they don’t believe the NTC speaks for them. They don’t believe the NTC is their legitimate leadership. They don’t feel accountable to them. So, you have a country that is thoroughly glutted with arms, without accountability, dependent in the past on a NATO-U.S. military presence and military action. And where it goes now is very unclear.

There have been statements by the earlier leadership that they would, quote, “remember” who their friends were, and they would make sure that they were treated well in a post-Gaddafi Libya. That was widely interpreted to mean that the countries that had provided military support to the anti-Gaddafi forces would gain a privileged position regarding Libyan oil contracts, etc. The irony, of course, here, Amy, is that this was not a war for oil in the classic sense, where there was a need to overthrow a dictator in order to claim the access to Libyan oil. Libyan oil was very much in the pockets of the NATO countries—Europe, the United States. Relations with Gaddafi were as friendly and chummy as could be—the pictures all over the world of Gaddafi arm in arm with presidents and kings and heads of state, most memorably perhaps with Condoleezza Rice, but also with President Bush, with President Obama, as recently as just weeks before the attacks, the NATO attacks, on Libya began.

So the future for Libya is going to be a very, very difficult one to reclaim some level of independence. The new leadership that is emerging, that includes both forces close to the U.S., close to the CIA for many years, as well as Islamist forces of a wide variety of sorts, as well as Libyan more secular forces that have wanted to challenge the political repression that characterized the Gaddafi regime, despite widespread well-being in terms of economic and social rights. So there’s a very complicated and, I think, very difficult place. Libya is going to be very vulnerable to Western pressure for a long time.

Further afield, further in the rest of Africa, you have a situation where the rising role of NATO looks very dangerous. We saw just in the last 24 hours or so, with Kenyan troops moving massively into Somalia, claiming to be going after the Shabab militia, but in the process, there were bombings, significant bombings, of a refugee camp with a number of people killed, dozens injured, not going after the militias, but going after the refugees, internally displaced Somalis who are fleeing the violence. There is now, we hear, a call from both Kenya and the government, such as it is, in Mogadishu that controls just part of the capital, really—no other part of the country—asking for NATO engagement again, asking for the U.S. and Europe, with NATO, to engage militarily. They’re asking first for a blockade of the port of Kismayo along the Somali coast, which is supposedly a place where there is great influence of the Shabab militia, which has carried out terrible atrocities against Somalis—there’s no doubt about that. But bringing in outside forces, bringing in more military forces, more men with guns, inevitably leads to more civilian casualties, not fewer. So the prospect of escalating the war in Somalia still further by bringing in NATO is a very bad example.

It’s an example, potentially, of the look of NATO expanding its own self-defined mandate from being initially to defend its own members—the North Atlantic Treaty Organization, it was called, of course. It was a Cold War creature. It was created by and during the Cold War to go after the Soviet Union. That’s what it was all about. With the end of the Cold War, instead of saying, “We’ve finished that job,” they have now expanded beyond that mandate, first to take up all the various questions and engagements and military involvement in Bosnia, in Kosovo, and now we’re seeing the involvement of NATO first in Libya and perhaps elsewhere in Africa.

You see at the same time, in parallel to a rising NATO role, you see the role of AFRICOM, the U.S. Africa Command, which, at least at the beginning of the NATO engagement, was in command of U.S. forces in NATO. And despite efforts to claim that AFRICOM is really about healthcare and AIDS education and women’s rights, to be carried out by the U.S. military, we have a very serious reality that Africa now provides more oil to the United States than the entire Middle East. So, the notion that this is somehow a humanitarian goal, which just coincidentally is going to be carried out by the U.S. military in the name of Africa Command, simply boggles the imagination. This is the expansion of U.S. military control of Africa. And we’re seeing, if we look at NATO as a whole and who are the powerful military forces within NATO, these are the former colonial powers in Africa. And I think that this is something that the African Union is going to be very much on guard against, and I think people across Africa are going to be seeing it that way.

We have a history where no African state, except for the president of Liberia, who just won the U.N.—sorry, who just won the Nobel Peace Prize this year—Ellen Johnson Sirleaf is the only African head of state who offered to host Africa Command. The Africa Command turned it down, because they believe that the situation in Liberia, the infrastructure, was not sufficient. But no other African country was prepared to welcome this U.S. military base on their soil. Whether that will change with the fall of Gaddafi, the emergence of a new government in Libya, presumably very dependent on, friendly towards the United States and NATO, whether Libya, for example, could emerge as a host of the Africa Command, remains to be seen. But it means a very dangerous period underway for Africa.

AMY GOODMAN: Phyllis Bennis, I want to thank you very much for being with us, fellow at the Institute for Policy Studies. Among her books, Challenging Empire: How People, Governments, and the UN Defy US Power. When we come back, we’ll take a look at Afghanistan. Stay with us.

Jonathan Steele on Afghanistan: “The War is Unwinnable. It is a Stalemate. There is No Military Victory”

NEXTJonathan Steele on Afghanistan: “The War is Unwinnable. It is a Stalemate. There is No Military Victory” 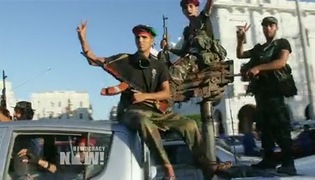 Video Report from Libya: “I Never Expected We Would Be Free”