Advocates for labor, women’s and immigration rights are celebrating a number of key victories in Tuesday’s state elections. In Ohio, voters defeated Republican Gov. John Kasich’s controversial limits on the collective bargaining rights of state employees. In Arizona, Russell Pearce, the architect of the state’s controversial anti-immigration law has lost his state senate seat in an unprecedented recall vote. Meanwhile, in Maine, voters have defeated a Republican measure that barred same-day voter registration on election day. For analysis, we’re joined from Ohio by reporter John Nichols of The Nation magazine. “There were many political consultants, political insiders, who said, 'Oh, don't pick this fight.’ You’ll note that President Obama and the Washington Democrats stayed clear of this battle in Ohio,” Nichols says. “But in Ohio on the ground, this grassroots movement, which put literally thousands and thousands of people, tens of thousands of people, at the doors, turned back a national conservative agenda. That’s a big deal.” [includes rush transcript]

NERMEEN SHAIKH: Advocates for labor, women’s and immigration rights are celebrating a number of key victories in Tuesday’s state elections. In Ohio, voters defeated legislation that would ratify Republican Governor John Kasich’s controversial limits to the collective bargaining rights of state employees. The issue was placed on the ballot after Kasich’s law was passed this spring, when a group that was created as a result gathered 1.3 million signatures to oppose the measure. The law was repealed by an overwhelming 61 percent of voters. Also in Ohio, a constitutional amendment barring an individual mandate to buy health insurance easily passed. It was widely seen as a statewide referendum on the federal healthcare law.

AMY GOODMAN: Meanwhile, in Arizona, the architect of the state’s controversial anti-immigration law has lost a major recall election. State Senator Russell Pearce was challenged by fellow Republican Jerry Lewis. Pearce wrote Senate Bill 1070, which requires police to investigate the immigration status of people they have lawfully detained. Pearce is the first Arizona legislator ever to lose a recall election. He’ll be required to step down immediately.

And in Philadelphia, there’s a new sheriff in town, but it’s not the longtime anti-poverty activist who ran for the so-called “People’s Sheriff,” Cheri Honkala, a member of the Green Party. She lost to Democrat Jewell Williams. Honkala had run on a platform promising to oppose foreclosures and refuse to evict people out of their homes.

NERMEEN SHAIKH: Meanwhile, Democrats claimed victories in a number of races Tuesday. In Kentucky, which voted for John McCain in 2008 and Rand Paul in 2010, Democratic Governor Steve Beshear was re-elected by a 21-point margin. In New Jersey, voters expanded Democratic control of the legislative chamber.

A couple of states have lightning-rod questions on the ballot this year. In Mississippi, voters cast ballots on a far-reaching and stringent anti-abortion initiative known as the “personhood” amendment. The so-called “personhood” initiative was rejected by more than 55 percent of voters, falling far short of the threshold needed for it to be enacted.

Well, for more, we’re joined in Columbus, Ohio, by John Nichols. He’s the Washington correspondent for The Nation magazine and maintains the blog “The Beat” at thenation.com. He recently wrote an article called “Occupy the Polls: Tuesday’s Critical Tests of Political Power.”

John Nichols, welcome to Democracy Now! Can you talk about the significance of the results of these elections.

JOHN NICHOLS: Yeah. The results are very significant. The truth of the matter is that on mornings like this, in many years, progressives have to look around for, you know, a thin ray of hope. But as you look across the country today, what you find is that in state after state, and in many unexpected places, there really were quite remarkable wins for progressive politics. And I think the important thing to take away from all of those results is that where the people led, where progressive forces led, and the Democratic Party had to fall in behind—you know, kind of join the movement, as happened clearly in Ohio, where labor led, and also, frankly, in Maine, where progressives got out in front on the same-day registration bill, where they overturned a Republican attempt to shut down or suppress the vote—the progressive ideas won, and also they won big.

The Ohio result was almost a two-to-one victory for a clear pro-labor stand. Similarly in Maine, an overwhelming victory. And then take a look at this Mississippi result. To have a 58-to-42 victory for women’s rights in a state where many leading Democrats actually took the wrong stand—they sided with the Republicans against women’s rights—that’s a powerful lesson that grassroots activists, that the people themselves, are a lot more progressive than the politicians. And it ought to be something, one would hope, that people right up to the White House would take note of.

AMY GOODMAN: John, you’re in Columbus, Ohio. You’re generally in Wisconsin. Talk more about how people organized and what this means for the conservative Republican governor, John Kasich, who used to be a congressman, then he was a commentator on Fox News for a long time; what this bill that was defeated means; and then what this means for Wisconsin and the country.

JOHN NICHOLS: Well, you put the two pieces together very, very well. Amy, you and I were in the State Capitol in Wisconsin back in February, when we saw tens of thousands of people out in the streets, hundreds of thousands on some days. That wasn’t just in Madison, Wisconsin, though. It was also in Lansing, Michigan, in Columbus, Ohio, and in other states, where new Republican governors set out not only to take away collective bargaining rights from public employees—and that’s what both the Wisconsin and the Ohio law did—but also to undermine public sector unions for the purely political purpose of making them dysfunctional at election time in 2012 and beyond. This was a very coordinated effort by conservative forces, many of them aligned with the American Legislative Exchange Council, a kind of shadowy group that brings together corporate interests and conservative legislators. So they really pushed this initiative through in a number of states. In Wisconsin, you saw some pushback over the summer with recalls of Republican state senators. But in Ohio, they have a wonderful law. I think it’s one of the best laws in the country. It allows the people to veto legislation that is passed by their legislature and signed by their governor. And so, Ohioans went out last spring, and they collected 1.3 million signatures—they only needed about 300,000, so an incredible number of signatures collected—turned them in, and forced what is referred to as a veto referendum. And that’s what they took to the polls.

Now, the really important thing to take away from this is that, from the start, labor and progressive forces were out in front. There were many political consultants, political insiders, who said, “Oh, don’t pick this fight.” You’ll note that President Obama and [inaudible] the Washington Democrats stayed clear of this battle in Ohio. But in Ohio on the ground, this grassroots movement, which put literally thousands and thousands of people, tens of thousands yesterday, at the doors, turned back a national conservative agenda. That’s a big deal. And now, in a week from yesterday, next Tuesday, in Wisconsin, a similar effort will begin. It’ll be an effort to recall Governor Scott Walker. And they have to gather 540,000 signatures, but already more than 8,000 people have been trained as petition gatherers, and more than 200,000 people have said that they are ready to sign those petitions. I think what we’re starting to see, Amy, across the country is a new kind of grassroots politics that refuses to accept the limits placed on our options by political consultants and political insiders, and says, “No, we’re going to force referendums, we’re going to force recalls, when they need to be held.” And I think it’s a very exciting moment. The Ohio result is an encouragement for that kind of politics. So, too, is the Maine result on same-day registration. Again, that’s a place where people went out, petitioned and forced a referendum on a law they didn’t like. I think if we take this politics across the country, we’ve got some real opportunities to change the dynamic in some positive ways.

JOHN NICHOLS: Yeah, it’s a very good question, Amy. Kasich is a much more old-school politician. He’s been around a lot longer. He probably agrees—I would say it’s fair to say he agrees with Scott Walker on most of the issues, but he may be a little bit more nuanced. Scott Walker has dug in his heels. He has refused to compromise. And it’s going to be very interesting to see how Walker responds to the Ohio result. He can’t help but notice this powerful message coming out of Ohio. And as somebody who’s facing a recall, I suspect you’ll see him try to scramble back to the center a little bit. But it’s fair to say that Kasich also tried, during this campaign, to present himself as a more moderate figure, and the voters just didn’t buy it. So, I suspect that no matter what these Republican governors do, the signal has been sent that they set out to take down labor rights, take down public employees, and frankly, there’s a very strong indication from across the country that voters don’t like that, and they’re willing to push back hard against Republican or Democratic politicians who assault labor rights.

AMY GOODMAN: John Nichols, we want to thank you for being with us, Washington correspondent for The Nation magazine, maintains the blog “The Beat” at thenation.com, speaking to us from Columbus, Ohio.

This is Democracy Now!, democracynow.org, The War and Peace Report. When we come back, we look at fetal personhood, a constitutional amendment that would recognize a fertilized human egg as a person. It was defeated in Mississippi. That’s where we’ll go. Stay with us. 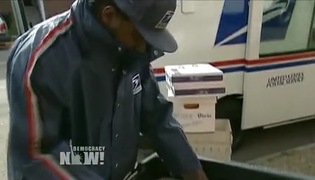