In a video statement released to coincide with the 30th anniversary of Mumia Abu-Jamal’s incarceration, the former South African Archbishop Desmond Tutu urges Abu-Jamal’s immediate freedom. Mumia “has faced years of prosecutorial and police misconduct and judicial bias,” Tutu says. “Now that it is clear that Mumia should never have been on death row, justice will not be served by relegating him to prison for the rest of his life—yet another form of death sentence. Based on even a minimal following of international human rights standards, Mumia should be released.” [includes rush transcript]

AMY GOODMAN: I want to turn now, as we wrap up this segment, to a video statement from former South African Archbishop Desmond Tutu, who’s joined Amnesty International and many others in calling for Mumia Abu-Jamal’s release. Tutu recorded this before Abu-Jamal’s death sentence was dropped, to mark the 30th year of his incarceration this week.

DESMOND TUTU: When the South African Constitutional Court was set up after the end of the apartheid regime, one of its first acts was to abolish the death penalty. Some of us have long argued that to take a life where a life has been lost does not serve justice and is often shallow revenge. It was therefore with some relief that we received the news of some small concession in the case of U.S. journalist and former Black Panther Mumia Abu-Jamal. On October the 11th, 2011, the Supreme Court of the United States upheld a lower court decision that Mumia, who has been on death row in Pennsylvania for 30 years, should never have been sentenced to death.

For three decades, Mumia has been held in a windowless, bathroom-sized cell and denied any physical contact with his family or with members of his community. This is in violation of the U.S.'s own Constitution. Juan E. Méndez, the United Nations special rapporteur on torture and cruel, inhuman and degrading treatment, recently presented a written report on solitary confinement to the United Nations General Assembly's Human Rights Committee. He confirmed what many of us have long believed, that any regime where an inmate is held in isolation from others for anything beyond 15 days must be defined as having engaged in torture.

In addition, Amnesty International, in a 2001 report, noted that Mumia’s original trial did not meet the minimal standards of international law. Mumia’s guilty verdict must be considered more than flawed. It is unacceptable. He has been denied the right to a new trial based on racial bias in jury selection, has faced years of prosecutorial and police misconduct and judicial bias.

Now that it is clear that Mumia should never have been on death row, justice will not be served by relegating him to prison for the rest of his life—yet another form of death sentence. Based on even a minimal following of international human rights standards, Mumia should be released. I therefore join the call and ask others to follow, asking District Attorney Seth Williams to rise to the challenge of reconciliation, human rights and justice. Drop this case now and allow Mumia Abu-Jamal to be released immediately, with full time served. With thoughts of the biblical call of Isaiah to set free those who are bound, I wish you all peace. God bless you.

AMY GOODMAN: That was former South African Archbishop Desmond Tutu, speaking about the case of Mumia Abu-Jamal. Again, Philadelphia prosecutors have decided not to pursue the death penalty, but to—but Mumia Abu-Jamal will now spend the rest of his life in prison without possibility of parole. That video that we have played exclusively will be shown tomorrow night in Philadelphia at Constitutional Hall and will also be streamed online. This is Democracy Now!, democracynow.org, The War and Peace Report. Archbishop Desmond Tutu also spoke here in Durban, just before the COP 17, the Conference of Parties, began almost two weeks ago, speaking for people all over Africa and around the world about the concern around climate change.

This is Democracy Now!, democracynow.org, The War and Peace Report. When we come back, we’ll be speaking with a local Durban climate activist, Patrick Bond, and the former Bolivian climate negotiator and U.N. ambassador from Bolivia, Pablo Solón. You’ll also hear from Wanjira Maathai, the daughter of the late Nobel Peace Prize winner Wangari Maathai, as well as the head of the Africa Group. We’re broadcasting live from Durban, South Africa. Back in a minute. 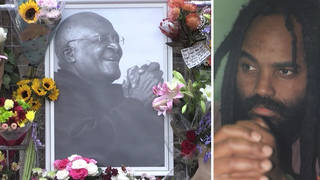