Report from Sendai: Fears of Radioactivity Are Hampering Relief Efforts

The official death toll from the earthquake and tsunami has risen to 5,000, and at least 9,400 people are missing. Some 850,000 households have no power, and 1.5 million houses lack running water. Food and gas supplies have been nearly exhausted. We speak with video journalist Tetsuo Jimbo, who is in Sendai, Japan, one of the worst-hit areas. He describes the destruction of Rikuzen-Takata, a city formerly home to around 20,000 residents, half of whom are now missing. Jimbo says fears of radioactivity are hampering relief efforts. “The government is overwhelmed. They don’t have enough personnel to devote to respond to the relief effort or the rescue effort.” [includes rush transcript]

JUAN GONZALEZ: We go now to Japan to a photojournalist there, Tetsuo Jimbo, who’s been working in Miyagi Prefecture, one of the areas hardest hit by the tsunami.

Tetsuo Jimbo, can you hear me?

TETSUO JIMBO: Yes, I can hear you.

JUAN GONZALEZ: Can you tell us what you’re seeing in the areas that you’ve been covering the past few days?

TETSUO JIMBO: OK, I was up at Rikuzen-Takata city and Kesennuma city, both in northern Japan, north of Miyagi Prefecture. And basically, what I saw was just a total, total destruction, especially the Rikuzen-Takata city. That’s a city with a population of about 20,000. But the whole city is basically wiped out. There’s hardly any houses left. And still about half the population of the city is still missing.

JUAN GONZALEZ: And what kind of efforts — has the government been able to reach the population that is now homeless with sufficient supplies? What kind of government presence do you find there?

JUAN GONZALEZ: And how has what’s been going on in the nuclear power plants, the disaster there, affected the ability of the government to provide sufficient assistance in the emergency to the population that’s been affected by the tsunami?

TETSUO JIMBO: Well, that’s very clear. The government is overwhelmed to respond to what’s happening, you know, to the series of unexpected events surrounding the nuclear reactor. So, they don’t have enough personnel to devote to respond to the, you know, relief effort or the rescue effort. And also, media attention is more focused on the nuclear reactor than the tsunami disaster. So, I think it is hampering the government’s ability and the public, say, attention to the issue of the tsunami and the people affected by it.

JUAN GONZALEZ: Have any of the basic services — electricity, water — been restored in any part of the areas that you’ve been in?

TETSUO JIMBO: Not yet. Right after the earthquake, sort of the majority of the northern Japan was out of power for some time. And most of the major cities have recovered power. But the area I’ve been to, Kesennuma and Rikuzen-Takata, are still completely out of power, out of water, and almost the entire population is spending in the refugee camp right now.

JUAN GONZALEZ: And the conditions in the shelters for the homeless and the refugee camps, how are they?

TETSUO JIMBO: Still very severe. You know, they’re mostly put in the gymnasiums of junior high school and high schools and elementary schools. In one shelter, there were about 500 people sleeping on the floor of the gymnasium. There’s only two very small gasoline stoves to heat up the room. So, the room was very cold. They have — at least they have water now, but the only food they have access to is some bread and rice balls. And they’ve been eating the same food in the past five, six days. And most of the people there are elders, so it is getting very tough on them, on their health.

We’re also joined by Steven Leeper. He’s the chairperson of the Peace Culture Foundation, which manages the Hiroshima Peace Memorial Museum in Hiroshima.

JUAN GONZALEZ: Could you tell us, from your perspective in Hiroshima, how the population there is dealing with or trying to assist their fellow countrymen in other parts of the nation who have been affected by the tsunami, as well as by the catastrophe at the nuclear power plant?

STEVEN LEEPER: Yeah, I think Hiroshima — in Hiroshima, we are pretty sensitive to radiation issues, and we’re very sensitive to disaster issues. And, you know, this thing happened on a Friday. By Saturday, we had already sent up a helicopter and a bunch of trucks and all of the blankets in our emergency location. And several trucks of water, we also sent. We actually, at the museum, we have a process that we’re supposed to go through in order to be able to put out donation boxes for something, but we were practically forced by the people to forget that process and just put the boxes out. So we put the boxes out — you know, they were out by Saturday, and people have been donating thousands of dollars trying to do whatever they can to help.

I think — oh, one other thing is that we are known as a place that knows about radiation. We have a team of doctors. I think they left yesterday to go up into that area with their equipment to try and figure out exactly what kind of radiation is up there. This is the big complaint that we have. You know, our doctors — one of our lead doctors, Dr. Hoshi, was on television the other day, and he was complaining that the government doesn’t explain what is in the air right now. And they’re talking about millisieverts, this and that, but it’s meaningless unless you know exactly what the isotopes are that are getting out. So, they’re going up to find out what that is.

We’ve also prepared a lot of apartments and a lot of — well, the hospitals are making preparations to receive radiation victims, you know, people who are suffering from radiation poisoning or need treatment in some way. And so far, as far as I know, we haven’t had any.

STEVEN LEEPER: We have had some refugees from up there coming down here to get away from that area, come to stay with friends and relatives in Hiroshima. But as far as I know, we haven’t had anybody suffering from radiation poisoning here.

JUAN GONZALEZ: Well, Steve Leeper, I’d also like to ask you — the Japanese public has been very supportive in the past of nuclear — peaceful nuclear energy uses, despite the enormous history of the use of atomic weapons in Japan. What do you think is going to be the result of this catastrophe now in terms of public opinion in Japan about nuclear energy?

STEVEN LEEPER: I have the feeling that we are witnessing the end of the nuclear renaissance. There were the — I can’t remember if it was the governor of Fukushima or a mayor of one of the local towns, but some official got on, and he was very angry. He said, you know, “They’ve been telling us all these years that this is impossible, but it’s now happening.” There is general anger.

I know, here in Hiroshima, the anti-nuclear people went down to the local power company, which is trying to build a nuclear power plant in Kaminoseki, which is about 60 kilometers south of here, and they delivered a statement demanding that all work stop immediately on Kaminoseki. And the word I’ve gotten is that the power company is not going to have the money to build that. They’re going to be putting their money into trying to recover from what happened up north. So, the feeling around here that I get from — even from people who are, you know, not your average anti-nuclear power person —- just the average person is saying, “No, this is the end of nuclear power.” Although, you know, we are very committed to it. The nuclear industry in Japan is one of the most powerful nuclear industries in the world. And they won’t lie down without a fight, I don’t think. And we are dependent here -—

JUAN GONZALEZ: I want to thank you, Steven Leeper, the chairperson of the Peace Culture Foundation, which manages the Hiroshima Peace Memorial Museum in Hiroshima, and also to Tetsuo Jimbo, video journalist working in the Miyagi Prefecture, one of the areas hardest hit. 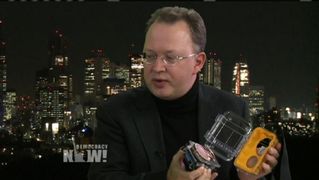