Former presidential candidate and longtime consumer advocate and nuclear critic Ralph Nader strongly advocates phasing out nuclear power in the United States by calling for public hearings on the status of every single nuclear power plant. “What we’re seeing here is 110 or so operating nuclear plants in the United States, many of them aging, many of them infected with corrosion, faulty pipes, leaky pumps and combustible materials… Why are we playing Russian roulette with the American people for nuclear plants whose principal objective is simply to boil water and produce steam? … This is institutional insanity, and I urge the people in this country to wake up before they experience what is now going on in northern Japan.” [includes rush transcript]

JUAN GONZALEZ: We’re discussing the continuing nuclear crisis in Japan, and we’re joined by Philip White from the Citizens’ Nuclear Information Center in Tokyo, Dr. Ira Helfand from Physicians for Social Responsibility, and Ralph Nader joins us from Washington, longtime consumer advocate, corporate critic and former presidential candidate. His latest book is Only the Super-Rich Can Save Us!

RALPH NADER: The Japanese disaster has ended whatever nuclear renaissance is being considered here in the United States. The problem is that people have got to get more involved, because the government and the industry will defend nuclear power in the United States to the last mutation. They are representing a closed, monetized mind that does not have options for revision, which true science should provide for. Secretary Chu, Energy Secretary, has refused for two years to meet with the leading critics of nuclear power, such as the Union of Concerned Scientists, Friends of the Earth and other groups. He has met with nuclear business interests regularly, and he has written articles touting nuclear power.

What we’re seeing here is 110 or so operating nuclear plants in the United States, many of them aging, many of them infected with corrosion, faulty pipes, leaky pumps and combustible materials. These have been documented by data from the Nuclear Regulatory Commission assembled by the Union of Concerned Scientists. Indian Point, for example, is a plant that presents undue risks, in the opinion of the Union of Concerned Scientists, to millions of people in the New York City greater area. And it is unevacuable if there’s an accident. You’re never going to evacuate a population of millions of people, whether it’s around San Onofre or Diablo Canyon in Southern California or Indian Point or Davis-Besse near Toledo and Detroit or any of the other endangered nuclear plants.

Why are we playing Russian roulette with the American people for nuclear plants whose principal objective is simply to boil water and produce steam? This is technological insanity. It presents national security problems, for every nuclear plant is a prime target. It affects our civil liberties. It endangers our workers. It is an industry that cannot be financed by Wall Street because it’s too risky. Wall Street demands 100 percent taxpayer guarantees for any nuclear plant.

So I suggest that people listening and watching this program to pick up the phone and dial the White House comment number, which is (202) 456-1111, (202) 456-1111, and demand the following: that there be public hearings in every area where there’s a nuclear plant, so the people can see for themselves what the hazards are, what the risks are, how farcical the evacuation plans are, how costly nuclear power is, and how it can be replaced by energy efficiency, by solar energy, different kinds of solar energy, by cogeneration, as Amory Lovins and many others, Peter Bradford, have pointed out.

We must no longer license any new nuclear plants. We should shut down the ones like Indian Point. How many people know that Hillary Clinton, as senator, and Andrew Cuomo, as attorney general, demanded that Indian Point be shut down? That doesn’t matter to the monetized minds in Washington, D.C. We also should prepare a plan where, apart from the aging plants, which should be shut down, and apart from the earthquake-risk plants — should be shut down — for the phase-out of the entire industry. We’re going to be left with radioactive waste for hundreds of thousands of years, for which there is no permanent repository. This is institutional insanity, and I urge the people in this country to wake up before they experience what is now going on in northern Japan: uninhabitable territory, thousands dead, hundreds of thousands at risk of cancer, enormous economic loss. And for what?

JUAN GONZALEZ: Well, Ira Helfand, this statement by President Obama, of the Nuclear Regulatory Commission, that they’re going to do a comprehensive review of the safety of U.S. nuclear plants, do you have much expectation for that review?

IRA HELFAND: I don’t, unfortunately. I’m most troubled by — in this regard, by President Obama’s rush to defend nuclear power last Sunday, even as this crisis was just beginning to unfold. I think the mindset is strongly in support of nuclear power within the administration. And obviously the Nuclear Regulatory Commission has functioned primarily as a cheerleader for the industry since its inception, which is really, you know, a tragic situation.

But I would agree exactly with what Ralph Nader just said. What we need to do instead is to have a real review of our energy policy here and to figure out how we can move as quickly as we possibly can away from nuclear, and away coal, for that matter, which also has huge health risks associated with it, and to seriously begin to build a green energy system based on energy efficiency, conservation and the development of renewable sources of power generation like wind and solar. This is an urgent national security task for the United States, and it’s something we have been ignoring and failing to address for decades at this point. The events in Japan have clearly shown that nuclear power is not reliable and contrary to the claims of the industry and the administration, and we need to move away from it.

JUAN GONZALEZ: And Philip White, your group, Citizens’ Nuclear Information Center, have been especially involved in efforts to prevent the development of a new plant in South Texas that the Japanese are directly involved in. Could you talk about that?

PHILIP WHITE: The Japanese government has been falling over backwards to support Toshiba, in particular, which made a very, very bad investment when it paid double what Westinghouse was worth to buy that company, and Toshiba is one of the investors in the proposed South Texas project, along with this very — would the Americans like this Tokyo Electric Power Company to come over and help them with their energy plants and advise them? This is the very Tokyo Electric Power Company which is now responsible for this reactor here.

Anyway, sort of irony aside, just recently, the Japan Bank [for] International Cooperation listed on its website that it was considering providing finance for this project. We believe that it would be in the order of four billion U.S. dollars, and that would be about one-third of the total capital worth of JBIC. So it would be — JBIC being Japan Bank for International Cooperation. So it would be an absolutely unprecedented loan for JBIC. And we have been lobbying, along with United States groups, as well as people from around the world, against the — on the grounds of the financial risk. I mean, we, of course, are very concerned about all these other risks, but somehow or other it always seems to fall on a deaf ear. We thought maybe the financial risk would resonate. And it has resonated with many people, even within the bureaucracy here. But there’s this incredibly powerful organization called the Ministry for Economy, Trade and Industry here, METI, which really has had a stranglehold on energy policy and nuclear policy for many years in Japan, and shifting them is a very, very difficult process. So, I think this has basically blown that away.

But actually, something really quite remarkable has begun to happen, something I never thought I would see. Yesterday, the leader of the Liberal Democratic Party in Japan, the more or less permanent government until a few years ago, 'til a couple of years ago, came out and said that it would be very difficult to maintain the nuclear policy as it currently exists. Fairly noncommittal words, you might say, but that in itself was an amazing statement. And then, the following day, the chief cabinet secretary in the current government, the Democratic Party of Japan, said that this was absolutely right. It was completely obvious that it would be difficult to maintain this policy now. That, in itself, to get that from both sides of the political spectrum, is extraordinary. But without public pressure, we won't make that to actually come through, I don’t think.

JUAN GONZALEZ: Well, Philip White, I want to thank you, from the Citizens’ Nuclear Information Center in Tokyo, Dr. Ira Helfand from Physicians for Social Responsibility, and Ralph Nader, longtime consumer advocate. Ralph will be returning in another segment later on in the show to talk about his involvement in protests against the anniversary of the Iraq invasion. Thank you all for joining us. 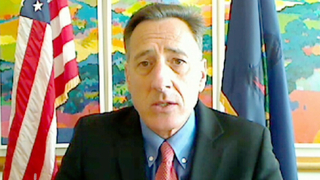