One day before the earthquake and tsunami hit Japan and sparked a nuclear crisis, the U.S. Nuclear Regulator Commission announced it would renew the license for Vermont Yankee Nuclear Power Plant. Vermont state legislators had voted to close the plant when its license expires in 2012. The 38-year-old facility has had a series of radioactive tritium leaks and is almost identical to the troubled Fukushima Daiichi plant in Japan. “My heart obviously goes out to the people of Japan,” Gov. Peter Shumlin says. “Extraordinary crisis and everyone’s worst nightmare, when they have aging nuclear power plants in their country or in their state. Vermont is no different. We have an aging nuclear power plant here. It’s owned by Entergy Louisiana, a company that we found we can’t trust. And obviously, it asks all of us to reexamine our policy of irrational exuberance when it comes to extending the lives of aging nuclear power plants.” [includes rush transcript]

SHARIF ABDEL KOUDDOUS: We’re talking about the nuclear disaster in Japan. We’re joined right now by the Vermont Governor, Peter Shumlin. Last week, the Nuclear Regulatory Commission announced it would renew the license for Vermont Yankee Nuclear Power Plant, the only power plant in Vermont. Last year, state legislators voted to close the plant when its license expires next year. The 38-year-old plant is one of the oldest in the country and has had a series of leaks.

We’re the only state in the country that’s taken power into our own hands and said that, without an affirmative vote from the state legislature, the Public Service Board cannot issue a certificate of public good to legally operate a plant for another 20 years. Now, the Senate has spoken, 26 to four, saying, no, it’s not in Vermont’s best interest to run an aging, leaking nuclear power plant. And we expect that our decision will be respected.

SHARIF ABDEL KOUDDOUS: Now, the day before this earthquake and the tsunami hit Japan, the Nuclear Regulatory Commission extended the lifespan of Vermont Yankee for additional 20 years. Explain the struggle that’s happening at the state and federal level.

GOV. PETER SHUMLIN: Well, you know, that’s really — should be of no surprise to anyone. There are 104 aging nuclear power plants in America. We do have a policy of irrational exuberance, as if we can run them beyond their designed life. And the NRC so far has approved 60 — all 60, I should add — of the applications for extension that have been granted. So it certainly would have been big news if for some reason the NRC said no.

The good news is, for Vermont, at least, that the chair of the NRC reaffirmed Vermont’s authority to also determine our own nuclear future, and they don’t intend to stand in the way of that. So, really, it was sort of a no news, no surprise item. It’s not a surprise that they continued their policy of, as I mentioned, irrational exuberance around our aging plants. The good news is that they respect Vermont’s authority to determine our own future.

SHARIF ABDEL KOUDDOUS: The Obama administration wants to expand the use of nuclear power. Do you oppose that?

GOV. PETER SHUMLIN: Well, you know, I spoke with the President about that directly a couple of weeks ago at the White House. And I said, “You know, Mr. President, if you want to convince us that new nuclear has a future in America, you have to help us deal with old nuclear in a more rational way.”

And, you know, we have a number of challenges right here in Vermont that should be an example for the country. The first is, our plant keeps leaking. It’s leaking tritium, other nuclear substances, into the ground right here in Vermont, in a state wherein — a Green Mountain state — there is nothing that Vermonters cherish more than our quality of life and protecting our natural resources. We are the environment state. So, that’s a challenge.

Second, the NRC currently is allowing the nuclear plant operators to determine, once a plant is shut down, whether they decommission it, which is what they all promised to do when they built them 40, 50 years ago, or whether they put it in something called “safe store,” which allows the carcass of the plant to sit in its location for up to 60 years, because the companies who own them have been unwilling to fill up the decommissioning funds to take them away.

Now, what I said to the President is, “Listen, you’ve got to help us deal with old nuclear before we can have any confidence in new nuclear. Make sure that these profitable companies, like Entergy Louisiana, fill up the decommissioning funds so they’re taken away on time and we’re not left, in our case, with a carcass of an aging nuclear power plant in a flood plain on the banks of the Connecticut River for 60 years, because the company is unwilling to fill up the fund. Secondly, let’s deal with the high-level waste issue.” We have high-level nuclear waste sitting in dry cask storages on the banks of the Connecticut River for as long as the eye can see, after having been promised when the plant was built that the federal government would magically take all that high-level waste away. So, I said, “Mr. President, you know, help us deal with old nuclear first. Let’s stop this policy of insanity about old nuclear, and we’ll be happy to talk to you about new nuclear.”

SHARIF ABDEL KOUDDOUS: Governor Peter Shumlin, I want to thank you very much for being with us. Governor Shumlin is the Democratic governor of Vermont.

“Get the Children Away from the Reactors”: Japan Urged to Expand Evacuation Area Around Nuclear Plants as Leaking Radiation Spreads

NEXT“Get the Children Away from the Reactors”: Japan Urged to Expand Evacuation Area Around Nuclear Plants as Leaking Radiation Spreads 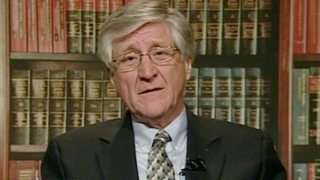