Mirroring their Wisconsin counterparts, 35 Democratic members of the Indiana Assembly have fled to Illinois to deny Republicans quorum for a vote on a similar anti-union bill. We speak to Indiana State Rep. Matt Pierce from Illinois. [includes rush transcript]

AMY GOODMAN: I want to turn now to the situation in Indiana, similar situation, where 35 Democratic lawmakers have fled Indiana in a move to delay passage of anti-union legislation there. Indiana State Representative Matt Pierce is joining us on the phone also from Illinois, where the Wisconsin senators have also gone to.

REP. MATT PIERCE: We left because there are a number of anti-labor bills that had been moved onto the agenda. We don’t even have collective bargaining for state employees in a state-wide statute. Previous governors had recognized the union through executive order. And Governor Mitch Daniels, on his first day in office back in 2005, decertified the union. They now have a bill moving through that would prevent any future governor from recognizing the union and would make it a crime for anyone to attempt to organize state workers into a union.

AMY GOODMAN: So, talk about why you feel you can’t accomplish what you need to in the Indiana state legislature, rather than — why you had to leave.

REP. MATT PIERCE: Well, the Republicans have a 60-seat majority out of a hundred seats in the Indiana House. And it’s been pretty clear, no matter what kind of proposals we’ve made to try to moderate these bills, let alone stop them, have been completely rejected. And I think the Republicans have a sense that they have a huge majority. They’ll be redistricting, redrawing the map. And I think they have a feeling that they just can do whatever they want with impunity. And so, first thing we wanted to do was stop the process, create a time out, so the public could better understand what’s at stake and what are in these bills. And we’re hoping the public will rally to the cause and convince the Republicans to back off from their agenda.

AMY GOODMAN: I want to move now from Indiana — well, you’re in Illinois, but usually in Indiana — to Idaho, where hundreds of high school students walked out of classes to protest a plan to lay off public school teachers and curtail their rights to collective bargaining. 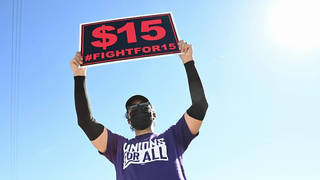