Haitians Deported from the U.S. Held in “Absolutely Horrific” Conditions

The United States resumed the deportation of Haitians back to Haiti in January even as the country remains ravaged by an earthquake and cholera epidemic. In February, one of 27 Haitians deported and sent directly to a Haitian detention center died of cholera-like symptoms. Citing inhumane conditions, the Center for Constitutional Rights has called for the Obama administration to extend the Temporary Protected Status for Haitian immigrants in the United States. Democracy Now!’s Amy Goodman recently spoke with CCR’s Laura Raymond in Port-au-Prince. “The walls of the detention center here were covered in feces and vomit, and the bathrooms weren’t working, so men had to go to the bathroom in trash bags. And these conditions, during a cholera epidemic, are literally deadly,” Raymond says. [includes rush transcript]

StoryFeb 09, 2021Amid Unrest in Haiti, ICE Deports Dozens — Including a 2-Month-Old Baby — into “Burning House”

AMY GOODMAN: We turn now to Haiti, which remains devastated by the massive earthquake that hit more than a year ago. More than 300,000 people were killed. Over a million-and-a-half people were made homeless in one of the worst natural disasters in history.

Now a cholera epidemic has spread throughout the country, killing more than 3,600 people. The United Nations projects cholera will infect possibly [400,000] Haitians over the course of the epidemic. A new study conducted at the University of California and Harvard Medical School predicts the epidemic could be far worse.

The United States halted the deportation of Haitians to Haiti shortly after the earthquake. Then in January of this year, it resumed the deportations despite the cholera outbreak. Immigrant rights activists have pleaded for a halt to the Haiti deportations, citing inhumane conditions.

While I was in Haiti earlier last week, I spoke about this with Laura Raymond of the Center for Constitutional Rights.

AMY GOODMAN: We’re here in Port-au-Prince at National Police headquarters, at the Police Nationale d’Haïti. This is a very significant place. It’s the place where high-profile political prisoners have been brought, like the famous singer So An, like Father Jean-Juste, a popular priest who was very close to Aristide and Lavalas. Now it’s where Haitians who are deported from the United States, even after the earthquake, even with the cholera epidemic, deported here. They are brought to this police headquarters, interestingly, the place where René Préval set up a temporary government after the earthquake.

And on January 20th of this past — this past January, 27 men from the United States were deported here to Haiti. And we had been working with partners in the United States, the Center for Constitutional Rights. We worked with the University of Miami and Florida Immigrant Advocacy Center and Alternative Chance and other partners to warn the U.S. government, really, that this would be a death sentence for some of these men because of the cholera epidemic and the fact that cholera is so present in the detention centers here. And despite our warnings and despite a petition to the Inter-American Commission for Human Rights that we filed in early January urging the United States government to stop deportations because of the conditions here on the ground, the U.S. deported 27 men, and many of them are held right here in conditions that are absolutely horrific.

We heard from the men themselves; we talked to them afterwards. Some of the colleagues at University of Miami came down here and talked to them afterwards and found that the walls of the detention center here were covered in feces and vomit, and the bathrooms weren’t working, so men had to go to the bathroom in trash bags. And these conditions, during a cholera epidemic, are literally deadly. And one of the men, who other deportees described as really a leader, a community leader, who took care of other men here, one of those men took the lead in cleaning up the conditions of the cell. And what we think happened is, because of all the contact with bodily fluids, we think he contracted cholera. He died of cholera-like symptoms just two days after his aunt flew from the United States and negotiated his way out of here. And he died, you know, at his aunt’s house two days later.

AMY GOODMAN: And why was he deported from the United States? Why were these men deported?

AMY GOODMAN: That was Laura Raymond of the Center for Constitutional Rights, as we stood outside the police station where Haitians are deported to. 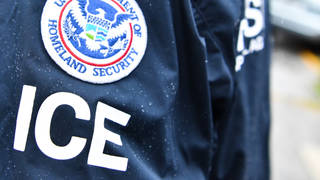 Amid Unrest in Haiti, ICE Deports Dozens — Including a 2-Month-Old Baby — into “Burning House”