Israeli Prime Minister Benjamin Netanyahu’s speech was warmly received by Democrats and Republicans in Congress on Tuesday. According to ABC News, he received 29 standing ovations during his address—four more than President Obama received during his State of the Union address earlier in the year. However, there was at least one dissenting voice inside the halls of Congress on Tuesday. Rae Abileah, a Jewish-American activist of Israeli descent with the peace group CodePink, disrupted Netanyahu’s speech. Standing in the congressional gallery, she yelled, “No more occupation! Stop Israel war crimes! Equal rights for Palestinians! Occupation is indefensible!” As she screamed, members in the audience tackled her to the ground, and undercover security forces later dragged her outside. She was taken to George Washington University Hospital where she was treated for neck and shoulder injuries. At the hospital, police arrested Abileah and charged her with disorderly conduct for disrupting Congress. Her protest came as part a week-long series of actions organized by CodePink called Move Over AIPAC. We speak to Abileah about why she used nonviolent civil disobedience to disrupt Netanyahu’s speech. [includes rush transcript]

AMY GOODMAN: Israeli Prime Minister Netanyahu’s speech was warmly received by Democrats and Republicans in Congress. According to ABC News, Netanyahu received 29 standing ovations during his address, four more than President Obama received during his State of the Union earlier this year. However, there was at least one dissenting voice inside the halls of Congress Tuesday.

PRIME MINISTER BENJAMIN NETANYAHU: Yet, as we share their hopes —

AMY GOODMAN: That was Rae Abileah, a Jewish-American activist with the group CodePink. She was disrupting Netanyahu’s speech. Standing in the congressional gallery, she was yelling, “No more occupation! Stop Israel war crimes! Equal rights for Palestinians! Occupation is indefensible!”

As she was screaming, members in the audience tackled her to the ground. Undercover security forces dragged her outside. She was taken to George Washington University Hospital, where she was treated for neck and shoulder injuries. At the hospital, police arrested Abileah and charged her with disorderly conduct for disrupting Congress. Her protest came as part a week-long series of actions organized by CodePink called Move Over AIPAC.

Rae Abileah is joining us in Washington, D.C.

RAE ABILEAH: Thanks, Amy, for having me on. Yesterday I stood up and unfurled a banner and spoke the truth about what’s going on in Israel. The war crimes and occupation, oppression and inequality that Palestinians are suffering from must end. And it was absolutely despicable to see our Congress pandering to Netanyahu as if he was the president of the United States. And I think after seeing the speech, every American should be outraged, and the progressive community needs to rise up and take courage and take action for justice, democracy, freedom and equality, in the Middle East as well as here at home.

I think that the act I took of courageously standing up in front of Congress doesn’t — the opportunity to do that doesn’t come along very often. But every day, as Americans, we have an opportunity to stand up. And whether it’s putting our money where our hearts are, by participating in economic pressure against Israel through the Boycott, Divestment and Sanctions movement, or calling our Congress people or taking other actions, it’s time for us to say no to this terrible policy that, just as Dr. Barghouti has illustrated, will not bring about peace. Netanyahu proved yesterday that he is the primary obstacle to peace and justice for Israelis and Palestinians. And to see our Congress giving away three billion of our tax dollars every year to Israeli war crimes, while our economy suffers, while our kids can’t go to college, while our needs aren’t being met here at home, is absolutely an outrage.

RAE ABILEAH: The thing I want to say is that when I stood up and was tackled yesterday —

AMY GOODMAN: Let me ask you —

RAE ABILEAH: — it was by members of AIPAC. Yes?

AMY GOODMAN: What were you just saying? You were tackled by members of AIPAC?

RAE ABILEAH: I just wanted to say that the people that were sitting around me in the gallery of Congress yesterday were mostly wearing badges from the AIPAC Israel lobby conference. And I did not expect that people holding such power and representing such a huge lobby group would respond so violently to my peaceful disruption. And after I spoke out, Netanyahu said, you know, “This is what’s possible in a democracy. And you wouldn’t be able to get away with this in other countries like Tunisia.” And I think that is ridiculous and absurd. If this is what democracy looks like, that when you speak out for freedom and justice, you get tackled to the ground, you get physically violated and assaulted, and then you get hauled off to jail, that’s not the kind of democracy that I think I want to live in.

AMY GOODMAN: Ha’aretz newspaper in Israel identified you as a Jewish-American activist of Israeli descent. Is your family from Israel?

RAE ABILEAH: My father’s family is from Israel, yes.

RAE ABILEAH: I’ve been to Israel, the West Bank and Gaza several times. And after witnessing the destruction, the Jewish-only roads, the wall, the bombing of Gaza and the inequality there, I feel like, when I returned to the U.S., I had no option but to speak out for justice. And I feel this tremendous responsibility as a Jewish American to speak out for justice and against these war crimes that are being committed in my name as a Jew, as a U.S. taxpayer.

But it’s not easy, for sure. There’s a culture of silence and fear in the Jewish community around speaking out about this. And it’s certainly — I get some blowback from family and friends. But I think it’s so important to follow my principles, my integrity and my heart. And I urge other especially young Jews to do the same. I think that us, as the next generation, we see things differently than the kind of brainwashing — or, we call it “bluewashing” —- that we’ve been fed, sometimes by our congregations or by Israel. We have to see through the veil of religious narrative to see that what Israel is doing is not in the best interest of Judaism either. And you were just asking Mr. Barghouti about the Jewish state. I think that what Israel is doing is completely out of line with Jewish values. The value of tikkun olam, of repairing and healing the world, is totally absent from the Netanyahu administration. So we have to reclaim those values -—

AMY GOODMAN: I want to thank you —

RAE ABILEAH: — and say that it’s not in the best interest of any faith to do this.

AMY GOODMAN: I want to thank you for being with us, Rae Abileah, peace activist with the group CodePink, who was tackled yesterday as she shouted out during Prime Minister Netanyahu’s address to a joint session of Congress.

Obama to Make First Presidential Visit to Puerto Rico Since 1961

NEXTObama to Make First Presidential Visit to Puerto Rico Since 1961 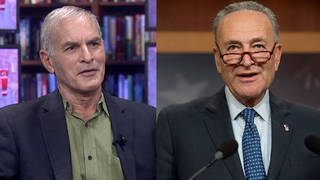