Obama to Make First Presidential Visit to Puerto Rico Since 1961

President Barack Obama has announced he will visit Puerto Rico next month, fulfilling his 2008 campaign promise and making him the first U.S. president to visit to the island since John Kennedy’s trip almost 50 years ago. A task force recently called on the United States to resolve the issue of Puerto Rico’s statehood by 2012. “All the four million people living on the island, as well as those Puerto Ricans who are here in the U.S., are U.S. citizens, but they inhabit a territory that is separate and distinct from the rest of the United States that has its own language, culture and history,” notes Juan Gonzalez, who writes about the country in his newly revised book, Harvest of Empire: A History of Latinos in America. “It’s this identity problem that really is a reflection of the continuing colonial—Puerto Rico is the last major colony of the United States. It’s one of the last remaining colonies in the world.” [includes rush transcript]

AMY GOODMAN: President Barack Obama has announced he’ll visit Puerto Rico next month. It will be the first official U.S. presidential visit to the island in 50 years. The Governor of Puerto Rico, Luis Fortuño said yesterday, “With his visit, President Obama will fulfill the commitment he made during the 2008 presidential primaries to return to Puerto Rico as president.”

President John F. Kennedy made the last official presidential visit to Puerto Rico in December of 1961.

PRESIDENT JOHN F. KENNEDY: It is a great experience to fly many hundreds of miles into the Atlantic Ocean to come to an island and be greeted in Spanish, to come to an island which has an entirely different tradition and history, which is made up of people of an entirely different cultural origin than on the mainland of the United States, and still be able to feel that I am in my country, here in this city and island, as I was in my country in Washington this morning.

AMY GOODMAN: That was President John F. Kennedy in December of 1961.

President Obama’s trip to Puerto Rico was announced at a time when Obama appears to be making a concerted push to win the Latino vote in 2012. Earlier this month, Obama gave a major address to a mostly Latino audience in El Paso, Texas, calling for immigration reform.

Today we’ll spend the rest of the hour looking at the history of Latinos in the United States and how it relates to U.S. political and military intervention in Latin America. Joining me is — well, usually we’re sitting right next to each other. Juan Gonzalez is the co-host of Democracy Now!, a New York Daily News columnist here in the city. But he also has just published a fully revised copy of his book Harvest of Empire: A History of Latinos in America. Originally released in 2000, the book explores the stories of Latinos from Mexico, Cuba, Puerto Rico, the Dominican Republic, Nicaragua and around the region.

Juan, it’s great to have you with us —

JUAN GONZALEZ: Thanks, Amy, behind the other side of the table.

AMY GOODMAN: — this time as guest. So, start off with the significance of President Obama’s trip to Puerto Rico.

JUAN GONZALEZ: Well, I think it’s extremely significant. As you mentioned, it’s the first time in 50 years that a sitting American president has visited Puerto Rico, and I think Obama is doing it on the 50th anniversary of John Kennedy’s visit, in essence, to show that — to follow in Kennedy’s footsteps and also to show the enormous importance he’s placing on the Latino community.

And his task force is — produces sort of kind of a new wrinkle on how you deal with the different choices that Puerto Ricans have: independent statehood, a commonwealth or some form of free association. And he’s saying — or the task force is saying that Puerto Rico should choose first whether it wants to be part of the United States or wants to be independent, and then if — once that choice is made, then if the voters vote to be part of the United States, then they would choose between a commonwealth and statehood — in essence, sort of a two-round elimination process.

The central problem, of course, that the Obama task force has not dealt with, and with — and few of the task forces have dealt with so far, presidential task forces, is the issue of: is Puerto Rico a separate nation or not? Do the people of Puerto Rico qualify, the definition of a nation, of a people who have a common history, a common language, a common culture and a common territory? Or are they some other form of people? And once you deal with the issue of whether Puerto Rico is a separate nation, then you deal with — you have to deal that that nation has some sovereign rights. And the Obama administration, like most other past presidents, have not wanted to delve into that issue, because it would raise the whole history of the colonial nature of American rule in Puerto Rico for all these years.

AMY GOODMAN: Your chapter — you have two chapters on Puerto Rico in Harvest of Empire: one, “Puerto Rico, U.S.A.: Possessed and Unwanted,” and the other, “Puerto Ricans: Citizens Yet Foreigners.”

JUAN GONZALEZ: Yes. Well, both deal with the identity problem of Puerto Ricans, who are at once U.S. citizens — all the four million people living on the island, as well as those Puerto Ricans who are here in the U.S., are U.S. citizens, but they inhabit a territory that is separate and distinct from the rest of the United States that has its own language, culture and history. And so, on the one hand, many Puerto Ricans are regarded almost as foreigners by other Americans when they come here, speaking a different language, even though they may have been born U.S. citizens.

And it’s this identity problem that really is a reflection of the continuing colonial — Puerto Rico is the last major colony of the United States. It’s one of the last remaining colonies in the world. And until that colonial situation is resolved and the United States government recognizes that it is holding and possessing a separate nation under U.S. rule, then you really can’t get to a final solution on what the status issue will be.

AMY GOODMAN: The level of poverty in Puerto Rico?

JUAN GONZALEZ: Oh, well, it’s still — it has dropped somewhat, but it is still extremely large. As much as half of the population is still in poverty. The unemployment rate is at depression levels and has been — remains stubbornly high, in the twenties now for years. And so, there are still enormous economic problems. If it were to be a state of the Union, it would be by far the poorest state in the Union, and so that there are still daunting economic problems. But until you resolve this political issue of — will Puerto Rico become a state? Will it become an independent country or free association with the United States? Or will it continue in some sort of this hybrid colonialism known as commonwealth, which has now existed for — since 1952? 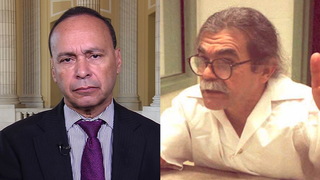