About 30 states allow hydraulic fracturing, or “fracking,” the natural gas drilling process that injects millions of gallons of water, sand and chemicals deep into the earth in order to break up shale rock and release natural gas. New York has imposed a partial moratorium on the drilling process pending the outcome of an environmental impact study this July. Yesterday, New York state lawmakers held a hearing on the health impacts of fracking, an issue that until now has received little media attention. We talk with Sandra Steingraber, a biologist who testified at the hearing. She is author of Raising Elijah: Protecting Children in an Age of Environmental Crisis. [includes rush transcript]

JUAN GONZALEZ: This week, a significant number of shareholders with Exxon Mobil and Chevron demanded more disclosure about environmental risks of hydraulic fracturing. The oil extraction process known as “fracking” injects millions of gallons of water, sand and chemicals deep into the earth in order to break up shale rock and release natural gas. A proposal for more transparency about fracking received about 30 percent of shareholder votes at Exxon, while 41 percent at Chevron backed a similar resolution.

Speaking to reporters after the meeting, Exxon CEO Rex Tillerson blamed the media for focusing on water contamination linked to fracking. He said, quote, “As often happens with these things, the early detractors slap a label on something, and it takes a long time to peel it off. And you guys help them slap it on there.” But the number of detractors continues to grow even as the Obama administration has put natural gas at the center of its energy policy.

AMY GOODMAN: In Texas, lawmakers are close to passing a bill that requires companies to disclose the chemicals they use in the fracking process. On Wednesday, Michigan passed a law that requires energy companies to ensure fracking won’t affect neighboring water wells or surface water. Earlier this month, scientists at Duke found dangerous levels of methane in water wells near shale gas wells in Pennsylvania and New York. And in April, scientists at Cornell University argued shale gas, touted as a cleaner alternative to coal, could actually be a worse contributor to climate change because of methane that leaks into the air during fracking.

About 30 states allow fracking, but New York state has imposed a partial moratorium on the drilling process pending the outcome of an environmental impact study this July. Well, yesterday, New York state lawmakers held a hearing on the health impacts of fracking, an issue that until now has received little attention. And we’re joined by one of those who testified, biologist Sandra Steingraber. She’s written the book Raising Elijah: Protecting Our Children in an Age of Environmental Crisis.

We thank you so much for being with us, Sandra. We only have a few minutes. Tell us what you testified yesterday.

SANDRA STEINGRABER: Hi, Amy. I testified on the threats of hydrofracking to air, food and water, with a focus on pediatric health effects. And as part of my testimony, I actually handed a loaf of bread to the legislators on behalf of a local baker, Stefan Senders, who creates bread out of flour that’s milled right in my little village of Trumansburg, New York, grown in fields, heirloom wheat and rye, that are surrounded now by gas leases. And so, the testimony in this bread, which came with a message from the baker, was that this bread is mostly water, and the whole enterprise of providing local artisanal bread — and this flour goes all the way to bakers in Brooklyn, as well — that it is providing jobs. They seek to expand their jobs opening at the mill. The farmers would like to have more fields. But the entire enterprise is being threatened by fracking. So when you poison the land and you poison the bread, you poison the people. So, that was my message both as a biologist and as the messenger for my local baker.

JUAN GONZALEZ: And this issue of — especially of the methane releases now that have been associated with so much of the fracking around the country, the health impacts of methane?

SANDRA STEINGRABER: The health impacts of methane were something else I talked to in the hearing about. No studies have been done on what it means to drink methane. Of course, methane is explosive. And so, I’m concerned that, as a biologist, when we haven’t done the studies, the wrong implication is that there is no evidence for harm. But we haven’t ever looked before, because people have never drunk methane in large quantities before, because we have never blown up the bedrock beneath our feet and sent methane into our drinking water before. This is an unprecedented situation. And so, one of my concerns is what happens when you chlorinate this water, as in public drinking water systems. We know that when you have carbon in water and you chlorinate it, you can create carcinogens, such as trihalomethanes, which are linked to colon and bladder cancer. And of course, children are far more vulnerable to their effects.

So I didn’t really intend to become the Rachel Carson of the Marcellus Shale, but in writing — while I was writing Raising Elijah, describing the various environmental health threats to our children, what arrived at my doorstep here in upstate New York were some of the largest energy extraction companies in the world — Halliburton and Exxon and Chesapeake Energy and so forth. And so, I felt compelled to take up this issue in Raising Elijah as I was writing the book.

AMY GOODMAN: Sandra Steingraber, I want to thank you for being with us. We obviously have to have a part two with you. Sandra is a biologist who testified yesterday on fracking in Albany, New York, at a state hearing. She has also testified before the European parliament. She is the author of several books that link the U.S. reliance on fossil fuels with environmental hazards and the climate crisis. Her book is Raising Elijah: Protecting Our Children in an Age of Environmental Crisis. 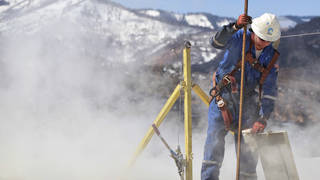