In New York City, members of the group New Yorkers Against Budget Cuts are camping out near City Hall to protest budget cuts and layoffs. Activists have dubbed the encampment “Bloombergville,” named after the city’s mayor Michael Bloomberg and “Hooverville,” the popular name for the shanty towns for the homeless during the Great Depression. Democracy Now!’s Jaisal Noor filed this report.

JAISAL NOOR: Dozens of New Yorkers have entered their 11th day of camping outside the gates of City Hall to protest the layoffs of thousands of public sector employees and sweeping cutbacks to social services. Organized by the group New Yorkers Against Budget Cuts, the coalition of students, teachers, and union members have dubbed the encampment Bloombergville: named after Mayor Michael Bloomberg. It is the longest running protest encampment in the city in years

Protesters are demanding the budget deficit be closed by increasing taxes on the wealthy. This is Queens resident Raymond Burke, Jr.

JAISAL NOOR: Topping the list of the protesters’ concerns is the proposed 6,100 teacher layoffs and the $500 million cut from the education budget. Sam Coleman is a New york Public School teacher.

EMILY TOURONIS: I personally had been at the Puerto De Sol in Madrid, in their tent city experience and as soon as I got back to the states, I was involved in planning for Bloombergville, which was very serendipitous. Its obviously been a very different experience, then whats going in Madrid, namely the police force has been very different here- there have often been more police officers then protesters.

JAISAL NOOR: Heavy rains and police pressure has forced the camp to relocate six times. There has also been one arrest — Last Thursday a 17-year-old high school graduate was arrested and charged with “obstructing pedestrian traffic.” He asked not to be named.

JAISAL NOOR: Despite the challenges the camp continues to attract new participants everyday, hundreds have taken part, mostly in rotating shifts. The number of overnight campers has fallen from more than the one hundred that slept out on the first night to ABOUT three dozen. Actions are staged twice daily and a general assembly meeting takes place every evening. New Yorker Gary Roland says the public’s gratitude has made living outside worth it.

GARY ROLAND: The best part about this whole thing is the response we get from people walking back, 9 times out of 10, they are very supportive of what we are doing and they are glad that somebody is finally standing up for the interests of the common people rather than the billionaires.

JAISAL NOOR: The camp sits on the bustling downtown Manhattan intersection of Broadway and Park Place. The majority of passersby appear indifferent but many do stop to express their support, including New Yorkers Hilary Moore, John Randle and Ronda Vargas.

HILARY MOORE: Hopefully people are listening to some of these things that are being said in signs and I think anybody that stands up in this city is doing a good thing I think its hard to stand up in this city its such an arterial place and people walk by you don’t pay attention to you.

JOHN RANDLE: Like it says here, Bloomberg’s cuts are going to affect 6,100 teachers, 50 million dollars in cuts just for child care. I mean I think education is one of the most important things in order for us to have less crime, better economical system, less poverty. Senior services, all different types of stuff, libraries…

JAISAL NOOR: City Council members and union leadership are currently deadlocked with the mayor in negotiations over the budget, ahead of a June 30 deadline. Bloombergville’s participants hope their actions push their representatives to take a strong stand against the cuts — in the same way that Wisconsin’s student and rank and file teacher protests compelled much of that state’s political and union leadership to take part in a massive uprising against Governor Scott Walker’s anti-union bill earlier this year. Bloombergville organizer Yotam Marom says the support of New York’s powerful unions has been limited to symbolic gestures, such as providing food to hungry campers.

CHARLES BARRON: “We can balance this budget overnight. The bottom line, in every state of the union where there’s been a deficit, the tax breaks to the rich, the subsidies to the rich corporations are greater than the deficit. So if they want to cut something, cut tax breaks, cut subsidies not services and layoffs.

JAISAL NOOR: Most of those camped out readily admit they alone cannot block the harsh austerity measures. But 17-year-old New Yorker Lucas Vasquez says he hopes Bloombergville will be a catalyst for a movement that can influence change.

LUCAS VASQUEZ: This is a long term movement, and all long-term movements have to start somewhere and this pretty radical action in the typical left actions of New York City. Where actually occupying and sleeping in, that doesn’t really happen in NYC. And hopefully it will grow. Like in Spain and Tahrir Square, people occupied and it grew.

JAISAL NOOR: Activists say they will remain at Bloombergville through the budget vote. 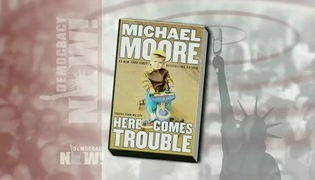