The British peace activist Brian Haw has died at the age of 62. For the past decade Haw lived and slept outside the Houses of Parliament in London to protest against the wars in Iraq and Afghanistan. He began his public demonstration in June 2001 to protest the Western sanctions against Iraq. Parliament Square became his home. His mail was delivered there. It was his registered address when he ran for Parliament in 2004, receiving 298 votes. Haw was also a vocal critic of former British prime minister Tony Blair. He died on Saturday in Germany, where he had been receiving treatment for lung cancer since March, his family told The Associated Press. On Monday, his camping chair and footstool remained undisturbed across the street from Parliament. Democracy Now! spoke with Brian Haw in March 2006, in Parliament Square. 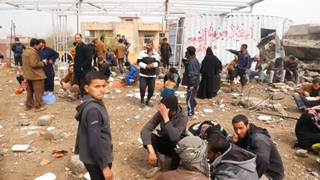