Amidst an intensifying crackdown on anti-government protesters in the tiny Gulf island kingdom of Bahrain, President Obama met Tuesday with Crown Prince Salman bin Isa al-Khalifa, a visit that was not announced beforehand. We speak with Nabeel Rajab, president of Bahrain’s Center for Human Rights, based in Manama. “On the ground, we don’t see anything, any signal, that makes us optimistic that the government has the willingness to go for a dialogue with the opposition and to listen to the grievances and the demands of the people,” says Rajab, noting that soldiers from Saudi Arabia, Jordan and Bahrain continue to arrest protesters and the doctors treating those injured during pro-democracy demonstrations. [includes rush transcript]

JUAN GONZALEZ: In the midst of an intensifying crackdown on anti-government protesters in the tiny Gulf island kingdom of Bahrain, President Obama met Tuesday with the visiting Crown Prince. Salman bin Hamad Khalifa’s visit to the White House was not announced beforehand.

SECRETARY OF STATE HILLARY CLINTON: Bahrain is a partner, and a very important one to the United States, and we are supportive of a national dialogue and the kinds of important work that the Crown Prince has been doing in his nation, and we look forward to it continuing.

JUAN GONZALEZ: Secretary of State Clinton on the visit of the Crown Prince of Bahrain to the U.S.

Yesterday’s meetings come less than a week after the Bahraini government lifted three months of martial law, then launched assaults on protesters in 20 villages. They also come just days after dozens of Bahraini medical officials who treated anti-government protesters were charged with attempting to overthrow the Bahraini monarchy.

AMY GOODMAN: A White House statement about the meeting made no mention of the Bahraini crackdown. In a prepared statement, Crown Prince Salman of Bahrain said, quote, “President Obama’s support and understanding regarding Bahrain’s forthcoming national dialogue were most welcome, as were his comments on the circumstances required to ensure its success.” Bahrain is a key U.S. government ally, home to the U.S. Navy’s Fifth Fleet.

We’re going to go right now to Bahrain, to the capital, Manama, to talk with Nabeel Rajab, president of Bahrain’s Center for Human Rights.

Welcome to Democracy Now! Very little attention paid to the Crown Prince of Bahrain’s visit to the White House, with them not putting out a statement beforehand that he was coming, Nabeel. Can you talk about the situation right now in Bahrain?

NABEEL RAJAB: Well, first of all, I see the visit as a, I mean, positive thing. The statement by President Obama, especially regard with the bringing people of human rights violators to justice. But in reality, we don’t see any impact of it on the ground. Still, a military court has been proceeding with more and more cases being taken and referred to the military court. Today, at least two women were sentenced to one year and two years because of their participation in peaceful protests. More people being arrested, more people being tortured, more people being fired from work, harassment of human rights defenders and politicians. More unionists, human rights defenders, politicians, bloggers were being brought to court. And more checkpoints and arresting people in checkpoints. On the ground, we don’t see anything related or a impact of the statement, couple of statements, made by the President Obama or by lifting the emergency law.

I think the emergency law have been lifted mostly because of targeting Formula 1 to come and targeting business to come to Bahrain. We don’t see anything positive on the ground, although many countries have called for a dialogue. Many governments has asked the government to sit with the opposition and to go and introduce some reform. But on the ground, we don’t see anything, any signal, that make us optimistic that government has the willingness to go for a dialogue with opposition and to listen to the grievances and the demand of the people.

As you see, we are living a state of emergency, an urgent state of emergency. Troops — Saudi troops, Jordanian troops, Bahraini troops — are arresting people everybody and humiliating each and everybody. As you know, doctors being referred to military trial, most of them — or if it is not all — being systematically tortured, sexually harassed, electrocuted, hanged and beaten. And this applies on most of the people who have been arrested. We hope we see improvement. We hope to see an impact of the President Obama’s speech. But as of now, we didn’t see anything like that.

JUAN GONZALEZ: Well, Nabeel, the Crown Prince talked about a dialogue that is supposed to start next month with other groups, with dissident groups in the country. Has there been any indication of preparations for such a dialogue?

NABEEL RAJAB: This is what I’m trying to say. I mean, for any dialogue, you have to prepare the environment. Preparing by environment, you have to release all the political prisoners, as most of the people you’re going to have a dialogue with, they are behind bars in jail now, are getting tortured and systematically being arrested. We see, as repressive as before, all peaceful protests, even religious marches being targeted and attacked in the past days. Since — and when it comes to repression, it is getting more and more. So we don’t see any kind of environment. Government should prepare that environment for the dialogue, but we don’t see that. We see that going more extreme, more repressive, more bloody.

As you know, last week, we have lost two people. After lifting the emergency law, we lost two people because of the government repression. More than 30 people — in terms of percentage, many people died here, more than any other countries. More prisoners, we have. As you know, two political prisoners for every thousand citizens. And that’s the most in all the whole region. So, dialogue needs an environment. Release them, build up all the mosques and worshipping places that they have demolished, and return people back to their home, return people back to their work, and create an environment for such a dialogue.

AMY GOODMAN: Nabeel Rajab, it seems that before the Crown Prince came to the White House, they announced the lifting of martial law in Bahrain. And yet, you have — for example, you just referred to the doctors — doctors and nurses, among others, being tried now for aiding wounded protesters. Can you explain what’s happening?

NABEEL RAJAB: I think the doctors have done a great job in the past month, and by updating all the news agencies and TV stations and human rights organizations what’s happening on the ground, as government of Bahrain blocked all the news of going out. So doctors were the only source of information to all the human rights groups. And they were treating all the wounded and patients who had been attacked by the special forces, security forces and intelligence. And for doing so, today they are punished. They are punished by being referred to military trial, by being — by torturing them systematically. So, today they are paying the price for the humanitarian job they have done in the past.

JUAN GONZALEZ: And Nabeel, you, yourself, have been targeted, as well. Could you talk about some of the stuff that’s happened to you in recent days?

NABEEL RAJAB: Well, I’m one of many thousands of people doing the same thing. I’m not — I mean, people have lost their life, which is much more than me. All the human rights defenders face the same thing. My house, three times, was targeted with tear gas, early morning and one afternoon. I was arrested couple of times and beaten up and then released. And I mean, a TV program, a radio program, a newspaper program targeting my personality, or me as a person, that I’m a bad guy, terrorist. But, you know, this is the cost of the human rights work, which the whole nation are paying today.

NABEEL RAJAB: So far, United States criticism were very soft, comparing to what they said in Syria and comparing to what they say in Libya. Everybody have witnessed the double standard of the American foreign policy. Everybody is upset about that. Everybody thinks the United States could have done more by pressurizing our country to do some more and to talk to their people. But unfortunately, we are a victim because we’ve been living in an oil region. We are living in a region where the American has a military presence, where they see sometime their military presence and their interest has more priority than the human rights of the people. I think the American civil society, the American TV stations, respected ones like you, have to add pressure to United States administration to do more. And they could do more. I think if they are serious, if they have the willingness, they could do more by pressuring our government to sit with their own people and listen to their grievances, rather than just seeing their interests.

AMY GOODMAN: Nabeel Rajab, we want to thank you for being with us, president of Bahrain’s Center for Human Rights. I hope you remain safe. He has been speaking to us on the phone from Bahrain’s capital Manama. 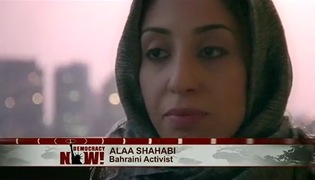