Bahrain has announced a commission to steer reforms after an inquiry found systematic rights abuse during a government crackdown on pro-democracy protests this year, but opposition parties say they will not participate in the commission. Published last week, the 500-page report outlines various abuses committed by King Hamad bin Isa Al Khalifa’s government. According to the commission, nearly 3,000 people were detained during the protests, and at least 700 remain in prison. Thirty-five people are believed to have died in the unrest between February and March, and 11 more are suspected to have been killed later on. Meanwhile, 20 Bahraini doctors and nurses are being retried by a civilian court today after being convicted by a military court of trying to overthrow the government of Bahrain. For more on the situation in Bahrain, Democracy Now! correspondent Anjali Kamat recently spoke to Bahraini activist Ala’a Shehabi during a trip to Cairo. She is the wife of a Bahraini political prisoner seized and jailed during the uprising. [includes rush transcript]

AMY GOODMAN: We turn now to Bahrain, which has announced a commission to steer reforms after an inquiry found systematic rights abuses during the government crackdown on pro-democracy protests. But opposition parties say they will not participate in the commission.

Published last week, the 500-page report outlines various abuses committed by King Hamad bin Isa Al Khalifa’s government. According to the commission, nearly 3,000 people were detained during the protest, at least 700 remain in prison. Thirty-five people are believed to have died in the unrest between February and March, and 11 more are suspected to have been killed later on. Meanwhile, 20 Bahraini doctors and nurses are being retried by a civilian court today, after being convicted by a military court of trying to overthrow the government of Bahrain, simply by treating protesters who were wounded in the pro-democracy uprising.

Well, for more on the situation in Bahrain, Democracy Now! correspondent Anjali Kamat recently spoke to Bahraini activist Ala’a Shehabi during a trip that Ala’a made to Cairo. She is the wife of a Bahraini political prisoner seized and jailed during the uprising.

ALA’A SHEHABI: My name is Ala’a Shehabi. I’m from Bahrain. I am a lecturer and a writer and an economist by day. I’m also a wife of a political detainee.

My husband is called Ghazi Farhan. He’s a businessman, completely apolitical. On April the 12th, he was arrested from his office car park. He was then held for 50 days. And then he suddenly appeared in a military tribunal at the end of May. He was charged with participating in the protests. I mean, a technical term is participating in an illegal assembly consisting of more than five persons. And he was also charged with spreading false information. And then he was then, you know, in a matter of 10 minutes, he was sentenced to three years in prison.

It’s been six-and-a-half months since that, since he was convicted. So it’s been a very difficult time for my family, personally. But, you know, I’d like to emphasize he’s, I think, one of at least 500 people in the prison that he’s in who have been arrested and charged and convicted because of their participation or involvement in the political uprising.

ANJALI KAMAT: In less than two weeks, military courts sentenced over 200 people to a total of some 2,500 years in prison. Among them were doctors, teachers, students, nurses, and even well-known athletes, who had participated in pro-democracy protests earlier this year or seemed to have supported them in some way.

ALA’A SHEHABI: They went after my husband because his relationship to me. I come from a strong, you know, opposition background. My father was an opposition activist. I was very active. So, I’m speaking to you on this camera today, so, you know, I kind of have never been quiet about my views or anything like that. So, I think they knew of me, and, you know, they just selected one of us.

ANJALI KAMAT: Despite the heavy-handed crackdown, the United States had no harsh words for the Bahraini regime. While praising popular aspirations for democracy elsewhere in the region, when it came to Bahrain, home of the U.S. Navy’s Fifth Fleet, the Obama administration was largely silent.

ALA’A SHEHABI: From the inside, you know, I’ve always noted the—you know, people have always noted the complicity of the United States, if not in active intervention, at least in the silence, against, you know, very obvious grave violations of human rights. I mean, at least if not—if they were not going to push for democratic reform, they could at least have pushed to stop the crackdown, which is still ongoing on a daily basis. So, they’re there. The base is there. You see Americans walking on the street. Yet, you know, we haven’t seen any of the punitive measures being taken against the Bahraini regime over this period.

In fact, you know, we were shocked to hear that there’s an arms deal that’s planned to go through, you know? So, the American—you know, the Americans definitely see it as business as usual. They will continue arming the Bahraini regime, even though we know that the Saudi troops that entered Bahrain were using, you know, American weapons. So, there is a precedent, a very clear precedent, that’s been set, where these Gulf states have no hesitation in using this weaponry against their own people. And, you know, there’s no guarantee that they won’t use it again or they won’t continue using it. So we—you know, we don’t see that the U.S. has been very, very helpful to the Bahraini people in their call for democratic reform. They continue arming the Bahraini regime. You know, it’s definitely—I mean, someone has said that Obama needs to attach a crumpled copy of his Arab Spring May speech when he sends those arms to the Bahraini regime. I mean, there isn’t a starker example of double standards of U.S. policy towards Bahrain vis-à-vis other countries in the Middle East.

ANJALI KAMAT: Earlier this year, the U.S. approved a $53 million arms deal to Bahrain. It’s been stalled until a rights probe by a state-appointed commission produces its findings.

ALA’A SHEHABI: Well, I’ve had direct experience and interaction with this truth commission. It’s another American idea to try and, you know, bring Bahrain back from the brink. I don’t need a truth commission to tell me what happened to my husband. You know, we’ve seen this firsthand. We don’t need someone from the outside to come and tell us what’s happened to the Bahraini people. We’ve seen it. We’ve experienced it. We’ve seen it across the country. We don’t need verification of that.

If anything, the key test of this commission will be to what level it holds the regime to account. And how can an appointed commission, you know, in which the people are hand-selected by the King, are being paid by the King, how can an accused party appoint someone that’s going to incriminate it? You know, it’s just illogical and irrational that it would do that. So, the inevitable expectation is that it will whitewash at least the highest ranks of authority from responsibility over the violations that occurred.

ANJALI KAMAT: I asked Ala’a what continues to drive people to protest and whether she’s afraid of speaking out so publicly.

ALA’A SHEHABI: You know, what we’ve seen in Bahrain has been very painful. I mean, it’s been—I can speak for myself, you know. You don’t want to see your loved one being punished and hearing the stories that come out, you know, very, very, very, kind of very, very atrocious things that you hear happening. And you wonder, you know, who is capable of doing this, in terms of inflicting, you know, torture on another human being like that.

But you reach a point where you don’t actually fear arrest. You know, you’ve heard the stories over and over again. You know what to expect. You know—you know what it’s like. You know, you know the details of things, and you lose this mask of fear. You know, it doesn’t really exist. So that’s why you continue seeing people protesting, and you continue seeing activists speak out on the media, on the press, despite the threats that they face. You know, you don’t know whether you’ll be prevented from traveling, whether you’ll be prevented from entering back into your country, whether you’re going to be spending the night in a police detention center the next day. So, you don’t know whether you’re going to lose your job when you go and attend a conference the next day. You know, so everyone knows that the price of speaking out is very high. People are just—it amazes me how I see people prepared to pay that cost.

And I’ve paid a very little price, I have to say. I mean, my husband spent seven months in jail, yeah, and—but I look around me, and he looks around him, and he says, you know, “I thank God that I’ve had—you know, I’m still alive.” And I actually have no regrets whatsoever. I kind of think that if it didn’t happen now, we were part of this—you know, I don’t like to call it the Arab Renaissance, you know, the rise against tyranny. You know, what other—what other moment in history are we going to get to try and change—change the world?

AMY GOODMAN: This is Democracy Now!, democracynow.org, The War and Peace Report. And that was Bahraini activist Ala’a Shehabi during a trip to Cairo, speaking with Anjali Kamat, the wife of the Bahraini political prisoner seized and jailed during the uprising.

When we come back, Mona Eltahawy has just come into our studio. She was beaten by the Egyptian police on Wednesday night. She has just flown back from Cairo. She has casts on both arms. She’ll join us. Stay with us. 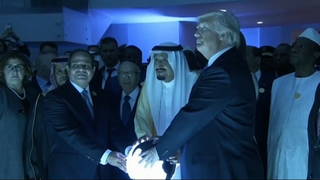