In Egypt, dozens of activists have been arrested in a series of sweeping raids in recent days. The arrests came as Egyptians took to the streets to protest an agreement to hand over control of two islands to Saudi Arabia. Critics say the islands belong to Egypt and that their transfer is linked to the billions of dollars the Saudis have given to support Egyptian President Abdel Fattah el-Sisi’s government. The arrests and raids come amid a nationwide crackdown against human rights activists and press freedom advocates. We speak with Egyptian filmmaker and writer Omar Robert Hamilton, who says Saudi Arabia’s strategy is to counteract democratic movements in countries surrounding it.

JUAN GONZÁLEZ: And the greater ties between Saudi Arabia and Egypt?

OMAR ROBERT HAMILTON: Yeah. So, Saudi Arabia is one of the main counterrevolutionary—probably the principal counterrevolutionary force in the region. After the Arab Spring began in 2011, when—autocracies began to crumble in the region, and Saudi Arabia has been working very hard to counteract any democratic measures or successes in any countries around it. It’s a huge bankroller of the Sisi regime. About $12 billion in aid poured into the country immediately after the military coup in 2013. And now there’s potentially up to $20 billion on the table in further investments coming from Saudi Arabia in the near future, which is part of what’s going on now with these islands.

So, the big political issue right now in Egypt is the two islands called Tiran and Sanafir, which are two islands in the Gulf of Aqaba which control the eastern waterway of the Red Sea. These are Egyptian islands. They are part of Egyptian territory. And it seems that in exchange for this money from Saudi Arabia and the promise of future investment contracts, that Egypt is going to cede control of them to Saudi Arabia. This has been a point of great contention. It’s a point of political weakness for Sisi now, particularly as he rode into power on this message of being a sort of nationalist savior.

AMY GOODMAN: Do you think that President Trump’s first foreign visit being to Saudi Arabia—and I believe Sisi was there, right?

AMY GOODMAN: When the various Arab leaders were there, when Trump visited Saudi Arabia—empowered Sisi, Saudi Arabia as well, and what’s—all that’s been happening in the Gulf, as well, and the isolation of Qatar, and what’s happening, the authoritarian ways of the leaders? So right now you have Sisi cracking down on websites, close to a hundred—what?—they’ve cut off access to, including one you were very involved with.

OMAR ROBERT HAMILTON: Yeah, certainly, I think that Trump’s visit to Saudi Arabia, the fact that it was his first state visit, and the promise of $100 billion in weapons purchases from the Saudis to the Americans has definitely given a green light to the Saudis. The isolation of Qatar is the clearest and most immediate example of what’s going on.

I think a key quote, when thinking about this, is Naftali Bennett, the hard—one of the hard-right members of the Israeli Knesset, said that the time has come for a right-wing peace. And so, I think what we’re going to see is this alignment of American allies, from Israel, Egypt, Saudi Arabia, Bahrain, Yemen, all now coalescing under this idea of having a right-wing peace, which is sort of authoritarian, where your prime goal as a government is to repress your own citizens and to maintain the power of the ruling elite, and that they’ve all kind of come to terms with the fact that they can be friends governmentally and that their main threat, to each of these countries, is actually their civilian populations.

AMY GOODMAN: And meanwhile, the civilian population of Yemen is just being utterly destroyed, devastated by the U.S.-backed Saudi bombing, also the outbreak of cholera and—but the crackdown on the media websites, what kind of access to information do you have in Egypt, when you’re there, and your own media collective?

OMAR ROBERT HAMILTON: Yeah. Well, I mean, the media in Egypt is already very, very, very controlled. The principal media actors in the country are owned by the state. You can’t broadcast anything on the radio unless you have a license from the state. You can be imprisoned for up to 15 years. Even the private media has been very much brought to heel in the years since the military coup and since Sisi came to power. So there’s been a very limited amount of dissent in the media anyway. And that is very much constricted or restricted to the internet. And now, basically, it’s the sites that have been vocal about this sale of the islands of Saudi Arabia, the sites who have been actually reporting on the news, are the ones that the government has been cracking down on and has been blocking. They’re also blocking VPN services.

So, the question is: How are they doing that, really? Where are the—where is the technology coming from? Egypt, in its bid to be friendly with all the major powers of the world, has become the fourth-largest weapons importer in the world. It also buys digital security tools from European countries. We know that they bought digital surveillance tools from Germany, from Finland and from Italy. So, it’s also a question of, you know, where are they buying the technologies to have such a wide crackdown.

AMY GOODMAN: Back to our first question, the execution of the men. Is there any way that will be stopped?

AMY GOODMAN: It’s up to Sisi himself?

OMAR ROBERT HAMILTON: Right now, it’s up to Sisi himself. He tends to make a point of not bowing to any kind of popular pressure. He is invested in an authoritarian character. So, I don’t know. We can only hope, really.

AMY GOODMAN: Well, we want to have you back on to talk about your novel, The City Always Wins. Omar Robert Hamilton is film director, and this is his premier book. He’ll be speaking tonight at McNally Jackson in SoHo on Prince Street at what time?

AMY GOODMAN: At 7:00. That is the end of Democracy Now!, democracynow.org, The War and Peace Report, at least for today. 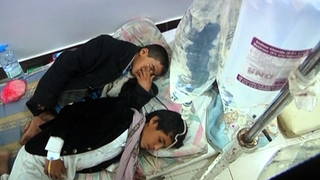