Last night in Chicago, the controversy over the immigration enforcement program called Secure Communities reached a dramatic standoff when six undocumented students were arrested protesting a meeting to discuss the program. Wearing T-shirts that said “Undocumented and Unafraid,” the students joined about 300 people in walking out of the meeting. Once outside, they blocked an expressway on-ramp in an act of civil disobedience. Protests against Secure Communities were also held earlier this week in Houston, Boston, Miami, Atlanta and Charlotte. We go to Chicago to speak with Fanny Martinez, a 23-year-old graduate student in Chicago, one of those arrested at the meeting. She was released from jail shortly before we went to broadcast. [includes rush transcript]

JUAN GONZALEZ: Last night in Chicago, the controversy over the immigration enforcement program called Secure Communities reached a dramatic standoff when six undocumented students were arrested protesting a meeting to discuss the program. Wearing T-shirts that said “Undocumented and Unafraid,” the students joined about 300 people in walking out of the meeting. Once outside, they blocked an expressway on-ramp in an act of civil disobedience. Protests against Secure Communities were also held earlier this week in Houston, Boston, Miami, Atlanta and Charlotte.

Under the Secure Communities program, local law enforcement agents are required to share the fingerprints of people booked into local jails with federal immigration agents. The Obama administration credits the program with helping it achieve roughly one million deportations since 2008.

AMY GOODMAN: In response to concerns that many of those deported are innocent or guilty of nonviolent crimes, such as driving without a license, the Department of Homeland Security has appointed a mix of advocates and lawmakers to a task force focused on reforming Secure Communities. It was members of this task force who met in Chicago last night and were greeted by hundreds of protesters.

Joining us now by telephone from Chicago is Fanny Martinez. She’s 23 years old. She’s going to be enrolling at the University of Chicago as a graduate student. She was one of the six undocumented students arrested at the meeting, just released a few hours before this broadcast.

Fanny, welcome to Democracy Now! Can you talk about why you are willing to get arrested as an undocumented student right now in trying to make your point? What is your point right now?

FANNY MARTINEZ: Hi, good morning. Well, basically, the statement was to make it very clear that we are angry, that we are tired of having programs such as Secure Communities. And in reality, doing the civil disobedience, we knew that we were taking the risk of possibly getting arrested, but under programs like Secure Communities, we are running the risk every day anyway, so really, this wasn’t a big difference. But we wanted to make sure that our voices were heard and that people, more than anything, in the community were aware of what communities meant, because unfortunately a lot of our—a lot of the, you know, members of the community don’t understand the gravity of Secure Communities. And I think that we succeeded last night on—you know, yesterday, making it clear how bad Secure Communities is and how it is disrupting our communities, deporting people, destroying families. It’s very devastating.

JUAN GONZALEZ: And Fanny, could you tell us a little bit about your personal story? When did you come to the country and how? And I understand you’re married to a soldier who is now serving in Afghanistan. Why have not—you not been able to legalize your situation here in the country?

FANNY MARTINEZ: Yeah, well, I came here nine years ago when I was 13, and I have been, well, you know, coming—going to school here. And one of the things that—you know, of course, as a student, I have to drive five days a week, and I’m always concerned, you know, that I might get stopped by the police and, of course, being arrested under Secure Communities and then possibly put on deportation proceedings.

And to answer your question about my husband, yeah, we have been married for three years. And he is actually flying home. He was in Afghanistan for a year. And I haven’t been able to fix my status yet. Of course, you know, the immigration system in the U.S. is inefficient. We all know that. And even though he is serving in the military—I didn’t come with a visa. I came here crossing the border illegally. So, you know, in order for me to fix my status—

JUAN GONZALEZ: And Fanny, when you say you came, your parents brought you, right?

FANNY MARTINEZ: Yes, yes, yes. My father was forced to come to this country, because he—we come from a low-class family. So, of course, he—it was very difficult for him to find a stable job, so he had to—it wasn’t a decision that my parents made. They were forced to immigrate to the U.S. And then they brought me and my sister.

AMY GOODMAN: And you came over the border.

AMY GOODMAN: So, last night at the meeting, at the hearing, what do you feel should happen with this program? In a moment, we’re going to have a debate on Secure Communities, the federal program. What do you think needs to happen with it? And what is going to happen to you? You’re going to University of Chicago in the fall?

AMY GOODMAN: What needs to happen with Secure Communities?

FANNY MARTINEZ: Well, we basically want President Obama and Congress to terminate it, because, yes, we know there’s this new task force trying to reform Secure Communities, but really, it doesn’t make us feel any safer. As long as it exists, you know, people will always have that on their mind, you know, in the back of their mind. Secure Communities means, you know, deporting families, deporting people who are non-criminals, not having trust with the police. It’s just—it has come to a point that, you know, the community doesn’t have—doesn’t want to have anything to do with Secure Communities at all, whether it is reform or if it stays the same. You know, we just want to terminate it. And we just basically ask President Obama to [stop] deportations of people who are innocent.

JUAN GONZALEZ: And your personal decision to come out publicly and actually risk immediate deportation, could you talk about how you reached that decision and why?

FANNY MARTINEZ: Yes. As I said, well, you know, in the undocumented youth movement, we have our say that we have learned to become—you know, we’re undocumented, but we’re also unafraid. And we have made it very clear that we’re not going to just sit down and watch other—you know, our neighbors, our families, our friends getting deported under programs such as Secure Communities. So, for me, I think my frustrations and my anger are bigger than my fears. You know, I am willing to take the risk to make sure that we—you know, we bring attention to this issue, which is right now we’re dealing with Secure Communities. And as I said, you know, it’s a point that we are very angry, and we are willing to do whatever it takes to get rid of programs like that.

AMY GOODMAN: Fanny Martinez, we want to thank you very much for being with us. Fanny is an undocumented student pursuing a graduate degree at the University of Chicago, one of six undocumented youth arrested last night outside the hearing on Secure Communities in Chicago. She was released this morning just before joining us on the broadcast. This is Democracy Now!, democracynow.org, The War and Peace Report. When we come back, a debate on the program called Secure Communities. Stay with us. 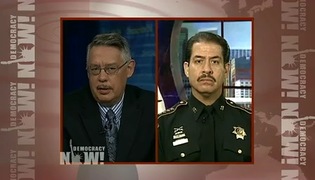