President Obama publicly confirmed Monday that the United States will oppose any attempt by the Palestinians to achieve statehood at the United Nations, but Palestinians leaders are still vowing to move ahead with their bid for statehood this week. What will the ramifications of a U.S. veto be? For more, we speak with Massachusetts Institute of Technology Professor Emeritus Noam Chomsky. “If the Palestinians do bring the issue to the Security Council and the U.S. vetoes it, it will be just another indication of the real unwillingness to permit a settlement of this issue, in terms of what has been for a long time an overwhelming international consensus,” Chomsky says. [includes rush transcript]

AMY GOODMAN: We’re talking to Noam Chomsky, Professor Emeritus at the Massachusetts Institute of Technology, has written over a hundred books, has just returned from Norway and Iceland. His latest book, 9-11: Was There an Alternative?

As the Palestinian Authority launched its bid for statehood recognition at the U.N. last week, the Obama administration confirmed it would veto any statehood measure that came before the Security Council. This is State Department spokesperson Victoria Nuland.

VICTORIA NULAND: It should not come as a shock to anyone in this room that the U.S. opposes a move in New York by the Palestinians to try to establish a state that can only be achieved through negotiations. So, yes, if something comes to a vote in the U.N. Security Council, the U.S. will veto.

AMY GOODMAN: And President Obama has affirmed this. Noam Chomsky, your response?

NOAM CHOMSKY: Well, unfortunately, it’s quite consistent with past practice. The list of U.S. vetoes at the Security Council to protect Israeli aggression and occupation is huge. The most recent one, which actually got some attention because it was so outlandish, was last February, when Obama vetoed a Security Council resolution endorsing official U.S. policy. Look at the resolution. Its core part was opposing expansion of Israeli settlements in the West Bank. That’s supposed to be U.S. policy. Obama vetoed it. If the Palestinians do bring the issue to the Security Council and the U.S. vetoes it, it will be just another indication of the real unwillingness to permit a settlement of this issue, in terms of what has been for a long time an overwhelming international consensus.

And this goes back a long time. The first relevant U.S. veto was in January 1976, 35 years ago. The major Arab states, so-called confrontation states—Syria, Egypt, Jordan—brought a resolution to the Security Council calling for a two-state settlement on the international border. And then the resolution incorporated the basic wording of U.N. 242, which everyone agrees, at least in theory, is the basic Security Council document, called for recognition of the rights of every state in the region—that would include Israel, a new Palestinian state—to exist in peace and security within secure and recognized boundaries—wording approximately like that. U.S. vetoed it. Another veto in 1980, a similar resolution. A long series since of—then things shifted to the General Assembly, where there are almost annual votes with, you know, numbers like 150 to three, and so on—U.S., Israel, sometimes a Pacific island, El Salvador. And this is just continuing right up to the present.

There are pretty ugly ones, too. The U.S. has blocked ceasefire efforts at the time of Israeli attacks. In fact, Obama himself—you can take a look at his—I don’t know if he still has it, but in his website prior to the election, there was a section on the Middle East. And it’s worth looking at. It gives you an indication of what’s been happening since. It’s full of, you know, adoration of Israel. You expect that. Practically not a word about the Palestinians, a few phrases saying maybe they should have some rights. But that was right in the middle of the latest Israeli invasion of Lebanon in 2006, a brutal, murderous invasion, without any credible pretext—you can go into that—actually, the fifth such invasion. And Obama took pride, in his webpage, in having co-sponsored a Senate resolution, right in the middle of the invasion, insisting that nothing be done to impede Israel’s attack in Lebanon and that the U.S. should censure and maybe sanction anyone who tried to interfere with it—Iran and Syria. So, let them—they must be able to go on to achieve their objectives, of killing a thousand Lebanese, again, destroying a strong a large part of the country, and so on. That’s Obama. When he—during the—after he was elected, Israel attacked Gaza, major attack on Gaza, late December 2008 right through January 2009. Obama was—I’m sure your listeners are familiar with that horrible, atrocious attack. The United States blocked efforts at the Security Council to establish a ceasefire to end the atrocities. Obama was repeatedly asked would he say something about it. His answer was, “There’s only one president. I can’t say anything about it.” He was saying all sorts of other things, but not this.

AARON MATÉ: We only have a few minutes, so I want to cut you off to get in a few more questions—

AARON MATÉ: —if we have time, which is that you’ve written about what it would mean for Israel and the U.S. if this statehood bid is passed at the U.N. And, of course, this debate is coming up very soon, scheduled to take place at the General Assembly in the coming weeks. What would it mean if the U.N. passes statehood for the Palestinians?

NOAM CHOMSKY: Well, that’s really up to us to decide. I mean, it could be—there could be a very harsh reaction on the part of the United States and Israel. The Congress, U.S. Congress, has already declared that it’s going to cut off funding, wants to cut off funding to the Palestinian Authority. Israel controls much of their funds through control of customs, transfer of finance. They all go through Israel. They could cut it off. The Palestinians could be in very serious economic trouble, financial trouble, if the U.S. and Israel, acting jointly, react to any kind of statehood bid by simply cutting off the funding on which they rely. Israel, for decades, has prevented any independent development, serious economic development, in the territories. There is—you know, the numbers show economic growth. It’s highly reliant on outside aid. It’s very artificial. And that could be a very serious blow to the Palestinians. The role that Egypt plays will also be significant, especially with regard to Gaza. My guess is that some kind of compromise position will be worked out, which will provide enhanced observer status to the Palestinians at the United Nations, maybe short of what would trigger U.S. and Israel from simply pulling out the rug from under their survival. It could be worse than that, in fact. 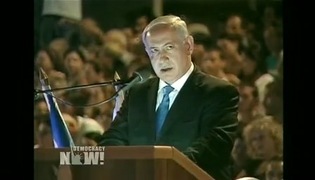